The 12th edition of Frieze London brought many changes. Yet while curators and exhibitors took creative risks, the Frieze formula continues to succeed in bringing the best galleries and artists to London each year

Frieze returned to London’s Regent’s Park in October for its 12th edition. This year, there were an additional 10 exhibitors, reaching 162 galleries in total from 25 countries. While the Frieze art fairs can now be labelled an art world tradition, Frieze London has not sat back on its successes. New developments showed that it is still evolving and, more importantly, keeping up with the pace of contemporary art. There was the introduction of Live, a performance art section, the scrapping of the Frame section, and the adaptation of the Focus section. The layout of the fair became more fluid in response and exhibitors were given more freedom within their booths. These changes were marked ceremoniously by a new directorship. Frieze founders Amanda Sharp and Matthew Slotover have stepped down to focus on developing new projects for the organisation, and Victoria Siddall has taken over the director’s role for Frieze London and New York in addition to her role as director of Frieze Masters.

The Live section featured six works of performance art, which were integrated into the architecture of the fair. Tamara Henderson’s work for Rodeo gallery, Istanbul, lay in an open space between booths, where furniture sprang up and performers mingled with visitors. Green Tea Gallery presented United Brothers Ei and Tomoo Arakawa with an installation titled Does This Soup Taste Ambivalent?, in which the artists’ mother served soup made from vegetables grown in the region of the Fukushima nuclear disaster of 2011. The Frieze fairs have had an enduring relationship with food. In 2012, Grizedale arts brought in an experimental dining experience for visitors and last year at Frieze New York, FOOD 1971/2013 was an art piece/restaurant where artists were invited to perform/cook on a stage.

As part of Frieze Projects, the non-profit arm of the fair curated by Nicola Lees, artist Nick Mauss choreographed dancers from Northern Ballet, who performed in leotards on an elevated stage in a corner of the fair. Visitors crowded around curiously as Kim Gordon and Juliana Huxtable played live music from beneath the stage. These experimental features were daring, but curated with confidence, showing that, as well as a marketplace, Frieze is a destination at which to see cutting-edge art. Projects and Live both work to redefine commercialism at Frieze, democratising the appeal of the fair while also broadening the horizons of the all-important patrons who attend.

The architecture of the fair was more fluid than ever before, accommodating the more experimental aspects. The booth shapes were more irregular and visitors were less inclined to walk up and down, but, instead, crisscrossed through spaces, led by the eye rather than the map. Galleries competed for attention with colours and concepts, dominating and branding their spaces. Booths became complete environments of contemporary art moving from display to exhibition.

Some of the most extreme examples included Salon 94’s bright yellow floor, where works by artists Takuro Kuwata, Jayson Musson and Takeshi Murata joined to create a concept-store effect. Other galleries competed for attention with colour, such as Angus Fairhurst’s blood-red abstract spatterings on the walls at Sadie Coles, a rainbow floor by Cory Arcangel at Lisson gallery and, at Esther Schipper, Thomas Demand’s wall of pink flowers, made of paper and card and then photographed. Gagosian won this competition with a new colour on each wall and a giant dice and Scrabble by Carsten Höller. The space had become the children’s creche by the end of the day, a line of pushchairs and tired looking parents congregating as their children climbed inside the dice supervised by Gagosian staff. Hauser & Wirth created an apartment-style space with wooden floors and dark green and red walls, inspired by the Hampstead home of Sigmund Freud and curated by Mark Wallinger, while at Frieze Masters, on the other side of the park, Helly Nahmad presented an art collector’s apartment, a brilliant accumulation of objects, books and furniture which drew a constant crowd. Galleries were given more freedom within their allocated spaces and consequently interior themes emerged, reacting to the white cube environment that Frieze London provides.

Some structural changes were more subtle. The Frame section, which had previously focused on a single artist designed for galleries 10 years or younger, did not return this year, but the Focus section, for emerging galleries expanded from 22 exhibitors in 2013 to 36. As Frieze London has grown, it has maintained relationships with young galleries that become more established and return each year, such as Bureau, Carlos/Ishikawa and dépendance, as well as inviting new ones into the fold such as Frutta, P! and Leo Xu Projects.

A special mention was given to galleries that chose to represent a solo artist. At Pilar Corrias, Koo Jeong A’s large sculpture of 2,400 magnetic blocks titled Cedric & FRAND (2014) dominated the space. A “do not cross” line warned visitors with pacemakers to beware, and a series of 33 colourful watercolours on paper were pinned to the walls. Polish-born artist Goshka Macuga was represented  at Kate MacGarry. Continuing the theme of collectors’ apartments, a tapestry showing the living room of a museum trustee hung on a dividing wall, behind which a video work and drawings were displayed. These galleries curated their booths as they would a solo show in a small gallery, another example of how the exhibitors were given more room for their individual visions.

While the fair is ticketed, Frieze Sculpture Park is free to the public. Curated this year by Clare Lilley, director of programmes at Yorkshire Sculpture Park, it continues to be a platform for high-quality and internationally renowned sculpture. Highlights included Small Lie (2013), by KAWS represented by Galerie Perrotin. Rainwater seeped slowly into this sad, wooden toy clown, whose hands weighed heavy down to his big clumsy feet. The work had a similar kitsch aesthetic to the much-photographed Jeff Koons’s Cat on a Clothesline (1994-2001) in 2013. Another crowd-pleaser was Gabriele de Santis’s Can’t Take My Eyes Off You (2014), a sculpture of two glowing emojis playing to current social media trends. Well-established names – such as George Condo, Yayoi Kusama, Thomas Schütte and Franz West – balanced the selection

Frieze London 2014 proved that contemporary art can no longer be confined to a white-walled booth. This was the most fluid and colourful fair yet. Exhibitors and artists took creative control of the tent, beneath which an atmosphere of circus prevailed. The combination of bold new performance works and considered shifts in structure, alongside continued high-quality representation demonstrates that Frieze can evolve with the times while maintaining its reputation as one of the best art fairs in the world. 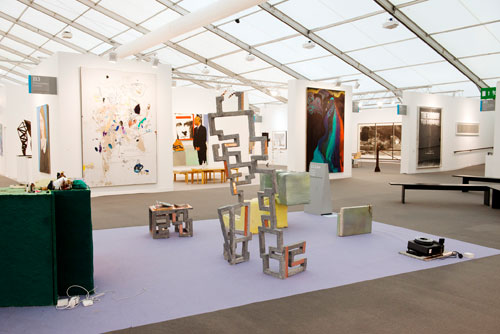 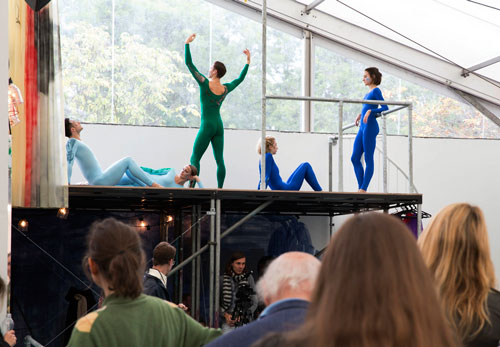 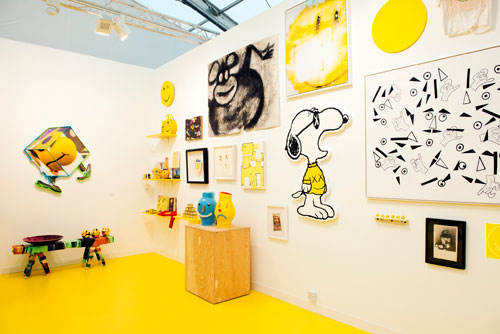 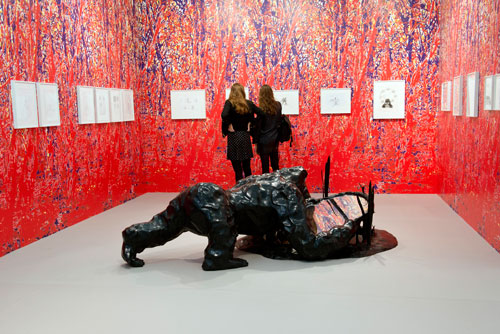 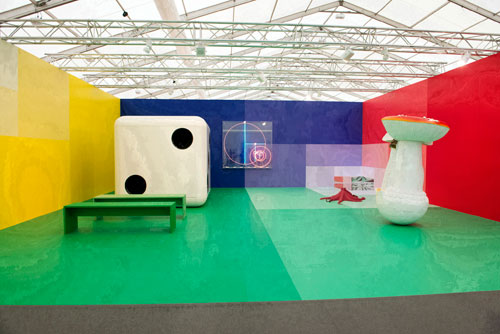 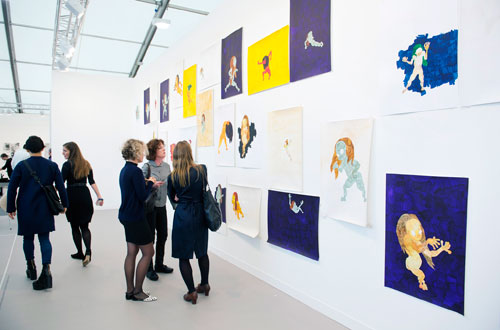 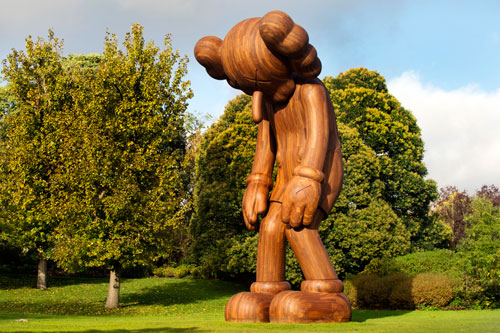 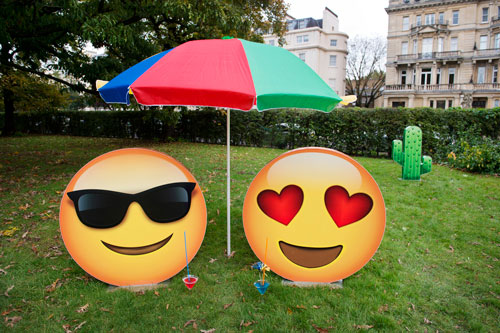