Carsten Höller’s show Leben allows visitors to do more than just view the exhibits. From staying overnight in his robotically operated bed to immersing themselves in a flotation tank, the artist invites them to engage all their senses

Artists have long wrestled with the fact that the gallery can be a tyranny as well as a sanctuary. It hosts art, but it can also distort it. Art can be confined according to commercial considerations or the vagaries of the curator’s tastes. Even the prevailing idea of the gallery as a sacred space to be walked through with silent contemplative reverence can be ill-suited and detrimental to some art. There is a thin line, after all, between the monastic cell and the prison. If the medium is indeed the message, too often the gallery space usurps the art within it.

There are several routes to avoid or subvert any stifling effects the gallery induces physically or ideologically. One is open revolt, as the Italian futurists demonstrated with their manifesto incitements to flood, demolish and ignite such institutions. Another is to showcase work outside galleries; on gable walls or in sculpture parks, for example, where the work can be said to breathe and interact with the real world. The most interesting path is to take the gallery and turn it into something else entirely. This has been a surprisingly tentative but radical process since the days when Vladimir Tatlin and Kazimir Malevich got into fistfights over who could hang their work in the corner of the 1915 0.10 Exhibition. Yet it has come to fruition in recent years. Often the core appeal of recent art has been what the artist does with a space and how they remake it, from Ai Weiwei to Louise Bourgeois. In the finest examples, the reconstituted space is the art; for example in the sublime work of Janet Cardiff and George Bures Miller, where you enter less a gallery than a Kafkaesque torture chamber or the hermitage of some mysterious gifted lunatic.

Carsten Höller’s LEBEN collection may not escape the situation of a gallery, but it broadens the definition of what a gallery is to fascinating transformed levels. Curated by Daniela Zyman, the exhibition draws on established and new work yet all seem somehow constructed with the environment in mind, if only in terms of purposely changing the surroundings. At what point does a gallery cease being a gallery and what can it change into? Or is it possible for it to become many things at once? LEBEN asks, and effectively answers, these questions while also drawing our attention to the limitations of more conventional art and its display, limitations from which Höller has broken free, with commendable assistance from Thyssen-Bornemisza Art Contemporary and Vienna’s Belvedere Museum.

In most cases, art is simply viewed; occasionally, sound or touch will be involved, but restrictions tend to be enforced and transgressions punished. The viewer is placed quite firmly in the role of the distanced voyeur. Höller’s art is, by contrast, immersive. It offers the viewer the role of participant. Höller creates not views of art, but experiences of it. It is a leap not just from 2D appreciation to 3D, but a leap again to 4D, given time is an integral component. With Aufzugbett (2010), we have a white bed on a circular platform. It can be raised robotically and rotated. It can be slept in overnight (bookable via Sofitel Vienna Stephansdom). Where is the art? Is it in the placing of a bed in the middle of an exhibition? Is it in the experience of sleeping in the gallery and waking to the morning light streaming through the windows? Might it be in the dreams induced by Insensatus Vol 1 Fig 1, a walnut box containing variously coloured toothpastes in metallic paint tubes, created with the perfumer Ben Gorham, to be used by the guests before retiring? Or is the art in contemplating the question: “Where is the art?” If this seems needlessly indulgent and irritatingly meta, it is worth noting it is fun; an underrated constituent of culture given our tendency to conflate tragedy with profundity. Whether or not we stay overnight, such work can give our thinking a welcome skewed angle if we decide to go along with it. If you’re not convinced, there’s a minibar in the nightstand.

The success of Höller’s exhibition is not in presenting a slightly surreal world within these walls, but in making us think differently and deeply about the world outside. With the radiating neon cables of Half Clock (2014), we have a deceptive measuring of time that succinctly points out that the passage of time is relative and subjective to human beings. The singing caged birds (Gimpelwaage, 2014) give an extra dimension and crucially an extra sensory experience to proceedings. They have been trained to sing Longing for Lullabies by the Swedish singer Titiyo, as an echo of the tale of Baron von Pernau (1660-1731) who taught the bullfinches of Germany to serenade his love, traces of which exist in their song to this day. The exhibition as a whole seems akin to being within a surrealist painting; not one of the wild writhing landscapes of illusions and impossible creatures, but the dreamlike paintings that are almost normal, almost real yet somehow exquisitely amiss. The surrealists phantasmagorias were designed to critique and add layers of perception to the way we see the everyday world and that duality is recurring through LEBEN. It’s there in High Psycho Tank, a flotation tank for visitors,where participants can unexpectedly find themselves floating on salinised water. Again, Höller provides art via the senses of touch and balance as well as mood, experiences often neglected by art we can merely see. Defying gravity, the participants become part of the artwork as shadows through the translucent tank. The viewer becomes the viewed and is absorbed into the work.

The double has long been a feature of European literature and art. Often its resonance centres around the unnerving similarities and indefinable differences between the real and the unreal. It is an unease that stretches from the portents of doom of doppelgängers right up to the uncanny valley effect of modern robotics. Yet there are perhaps lessons in the unease or intrigue they provoke in us. As with the difference between the world within and without, Höller’s film Vienna Twins (2014) undermines the certainties we casually assume. “I always say the same as what you say,” one twin sings to her sister in the television opposite, and is immediately contradicted: “I always say the opposite of what you say.”  This un-mirroring is mirrored by the Congolese musical rivals of Fara Fara (2014), a film in which what is different and adversarial between the protagonists Werrason and Koffi Olomidé is precisely what gives the Kinshasa music scene its vitality. Similarly, the cages of Höller’s bullfinches are weighed and balanced according to the slightest fluctuations of perch and flight. Differences matter and reverberate.

Things are not as they seem or as we assume. This is highlighted further in Höller’s Giant Multiple Mushrooms (2014). These are just a playful combination of painted replica fungi in the lush surroundings of the gardens yet, because they are segmented in various states of aging, they make us wonder how something can at varying stages be the same and entirely different. They might even, in a moment of morbidity, make us consider the doppelganger of our earlier, later and present selves. In the dazzlingly lit spiralling tunnels of Höller’s Y (2003), shown earlier in the stunning Marble Hall of the Upper Belvedere, it is clear that perception is not natural or inevitable at all, but is wrapped up intrinsically in choices and expectations. You pause at the Y-shaped crossroads, which offer escape or return, and the thought, as with all Höller’s enlightening rebalancing work, is both why and why not? 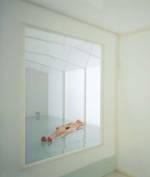 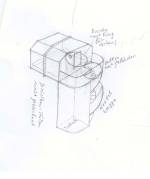 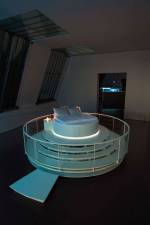 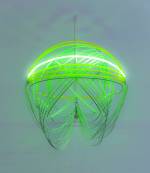