The Present of Modernism

The Present of Modernism

The Present of Modernism at Vienna’s Mumok compares works from the original movement alongside early abstract art, futurist work and contemporary pieces that recall related ideas. In so doing, it opens up a dialogue between past and present, but the conversation can be rambling

The idealistic “project of modernism” was conceived in the early 20th century to fuse art and reality across all artistic disciplines, with the lofty pursuits of progress, rationalism and order in mind. The philosophy changed the art, and the art changed the world – or at least it tried to. As the century progressed without the modernist ideas of “progress” being consistently realised, the project was considered by some to have failed. Although the designs and art of the movement were hugely influential, those structures would live alongside the chaos and Dionysian flux of a world where clean lines and innovation could decay and fall. Modernism was influential, but not strong enough; it was detritus that post-modernist projects could recycle with proud recklessness, even as architects and authors sought to redefine and improve the original designs. The legacy of modernism, therefore, became unclear and confused as the century ended.

Asking some big questions about that legacy, and showing a vast array of artworks, The Present of Modernism at Mumok, curated by Susanne Neuburger and Katharina Schendl, certainly sparks a grand discussion about the place of modernism in contemporary art practice. “Is the utopian project still alive?” “How long will it stay alive?” “What is the evidence of its influence in the 1960s, the 1990s, and now?” Displaying around 150 works from the museum’s permanent collection, as well as some new acquisitions and works on loan, we are given an arsenal of useful clues and, perhaps, quite a few red herrings. From iconic works of classical modernism, early abstract art and futurist work, to post-minimal art of the 60s, and contemporary dance, film and architecture, it is easy to feel overwhelmed and confused by the array of loosely connected work. The problem with the exhibition, it would seem, is that post-modernists designed it.

The Present of Modernism is a maze rather than a set of clear answers; it is a living memory of modern art, ready to be analysed, reviewed, and, with that process, some of the memories discarded as irrelevant. Modernism may still be relevant, but not all the artworks on show in the exhibition are necessarily relevant to that discussion.

Perhaps because the show relies heavily on Mumok’s permanent collection, there is a sense that the idea of “modernism” has been stretched to include a vast array of works from that collection out of convenience, rather than to interrogate the idea and legacy of modernism. The show seems to try to do too much, or open the discussion too widely, therefore. Is modernism relevant? The exhibition seems to assume that it is, because it finds so many ways in which it has influenced art and design (and dance) in the past century. It might have been interesting, however, to question that assumption more fervently, and to consider other explanations for the apparent connections between artworks, or to lose the artworks where the connections are only vague.

The exhibition’s criteria for “relevance” seems too loose and wide. I get the impression that nearly anything, in this context, or conversation, could be argued to be “proof” that modernism is influential and so relevant. Perhaps modernism did have this extensive and ongoing influence; the problem is that there are more works that have only a loose connection with, or are influenced by, modernism than works that are clearly and archetypically “modernist”. It is almost as if “modernism” has been exchanged for “the modern”.

The exhibition does manage to show how various movements and media are interconnected, but that is not saying anything new, and it is not convincing that the reason these movements are connected is because of the ideas of modernism. A comparable exhibition was Centre Pompidou’s 2005-06 exhibition The Big Bang: Creation and Destruction in 20th-Century Art.</sup>1 This also relied heavily on the museum’s own permanent collection, and gave a wide view of 20th-century art. But by choosing a common thread of “creation and destruction”, the Pompidou could trace the art alongside world events as well as thematic concerns, which it did very well – and therefore there was a more succinct presentation of ideas and art, but just as much room to connect various artists and movements. The Present of Modernism, on the other hand, tries to reduce its collection to the influence of “modernism”, but in doing so, oversimplifies the connections and influences, and denies the perhaps equal relevance of the many other ideas and movements at play.

Nevertheless, the exhibition is worthwhile, if mainly because it shows such a brilliant range of modern art, whether or not it is really anything to do with modernism. Highlights include Constantin Brancusi’s bronze casting, La Négresse blonde II (1933) alongside Picasso’s Seated Woman with Green Scarf (1960) and Egon Schiele’s provocative and entertaining Self Portrait with Raised Bare Shoulder (1912). This arrangement shows the way in which understanding of the body was apparently revolutionised in the early 20th century, and how fine art’s experiments with the human figure influenced dance then and in the decades that followed. Recalling the Centre Pompidou’s 2011-12 exhibition, Danser Sa Vie, this room in The Present of Modernism is a less substantial nod to the collaborations between art and dance, and some occasionally tangible links to modernism.

Another highlight is Jörg Immendorff’s large and engaging painting, Musée d’Art Moderne, in which people from the art world are assembled and painted as if characters in a comic. As well as fellow artists, curators, gallerists and collectors, he has included his parents, Marcel Duchamp, and himself (twice, and the only figure not seeking eye contact with the audience). In a satirical and entertaining manner, Immendorff uses this tableau to criticise the art world and its hierarchical structures and quirks.

Individual works, such as László Moholy-Nagy’s Constructivist/Bauhaus painting, Komposition Q VIII (1922), are an interesting addition to the exhibition. In the case of Moholy-Nagy’s work, it does not clearly fall into mainstream Constructivism, or Modernism, as the artist did not identify himself as part of a group or philosophy. Nevertheless, the qualities in his work clearly relate to those groups and ideas, and by considering it in a wider framework, those connections can be seen and his work seen afresh. René Magritte’s La Voix du Sang (1959), meanwhile, an eerie painting of a tree against an almost neon-blue sky, with a futuristic composition in its trunk opening to reveal a little house glowing within, possesses a brilliant sense of possibility and imagination in a particularly delicate manner, whose style does seem to borrow from the classical modernist style, as well as its contemporary influences of the space age and even Pop Art. Piet Mondrian’s Komposition mit Doppellinie und Blau (unvollendet), (1935), with its stark black lines and a cerulean box, seen alongside Magritte’s work, as well as the various architectural drawings and models, seems therefore caught in the middle of contemporary and future painting and architecture, whether intended by Mondrian or his peers and future artists, or not.

Architecture and design itself are focused on a dedicated level of the exhibition, which is the room with perhaps most relevance to classical modernism and its continuing influence. Architectural models by Adolf Loos, Le Corbusier and Fritz Wotruba, and drawings by Josef Hoffmann are fascinating and a reminder of the way in which we still live with the original ideas and subsequent adaptations and innovations whose roots were in modernism.

Overall, however, the exhibition tends to sprawl beyond such relative order. It invites a wide and open discussion, which is interesting and possibly enlightening, even if it is prone to ramble because of that. The exhibition’s big questions may not be answered, but other questions are asked through that exchange, and perhaps will find more succinct answers. Although the exhibition is about modernism, its method and realisation seems to veer towards post-modernism, for better or worse. 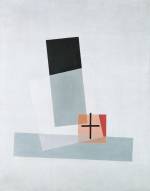 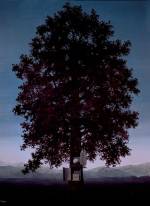 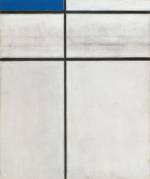