The most memorable ever Futurist exhibition took place in Venice, as long ago as l986. Entitled Futurism & Futurists, it was curated by the late Pontus Hulten with great success, and hung at the Palazzo Grassi, complete with suspended biplane and cacaphonic audio effects. This new exhibition, come to Tate Modern via the Centre Pompidou, Paris, entitled there, Le Futurisme a Paris, Une avant-garde explosive and the Scuderie del Quirinale, Rome, is on a significantly smaller scale, and yet it brings together most of the key works of the movement.

Questions still arise today. Who was Sonia Delaunay (1885-1979)? Or Sonia Terk in her maiden name? So unremittant was the ambivalent attitude to women artists of the broader Futurist movement initially that they existed only as a rare but protected species. She had grown up in St Petersburg at the turn of the nineteenth century, the daughter of a well-endowed Jewish mercantile family. Later in her formative years she reached Paris, meeting Robert Delaunay. Together Robert and Sonia established a ‘cercle’ having already both achieved their artistic credentials. In l910, the place to be was in Le Fauconnier’s studio, or at the Closerie de Lilas Café, both inter-connected watering places for the emergent Cubist grouping. Their standards of acceptability were high: one friendly critic Roger Allard referred to, “a certain Futurist Manifesto which caused much mirth”. In such intellectual circles, the ideas of the Futurists were indeed considered ‘not proven’. Already attempts were made to shelter the infant Cubism from surging Futurism. Later that year, Guillaume Apollinaire, (1880–1918) at the Salon d’Automne in Paris was to anoint Cubism as a movement, to be protected from contamination by crazed Italians. In Milan too, in l910–11 a degree of ignorance seemed to affect Umberto Boccioni, (1882–1916) and in Paris, Gino Severini, (1883–1966) but this was soon to be remedied for them. Boccioni in particular was much influenced on seeing Robert Delaunay’s, Eiffel Tower, (1911) and so completed his The Street Enters the House, (1911) in a Cubist manner. The lines were already getting crossed. Only with the superb Futurist architectural speculations of Sant’Elia was there a forecast of global significance.

In 1912 the Futurist exhibition in Paris opened, and the leading protagonists lined up in their bespoke suits and bowler hats, like a conclave of city bankers. But this was no Gilbert and George act: these Futurists were deadly serious, for power, for fame, for supremacy in the cultural domains of Europe. To French intellectuals they were however absurd, a curiosity, no more. Apollinaire for one was deeply offended by their ‘opulence’ by contrast with the impoverished Cubists. In early March 1912, Valentine de Saint-Point issued her Manifesto of the Futurist Woman, which was published in Berlin in German, in Der Sturm. Later, in l914, at the Salon des Independantes, Apollinaire could comment that the Futurists, now frequenting Paris, were more influenced than ever by the innovators of Paris, such as Pablo Picasso  (1881–1973) and Georges Braque (1882–1963).

FT Marinetti soon made what appears to have been a second, more publicised visit to Moscow, in 1914. A Russian ‘Futurism’ now emerged, from the confusion, strongly influenced too by French Cubism; after l911 Sonia Delaunay’s new painting made an impact (as a Russian) and Natalia Gontcharova (1881–1962) and Alexandra Exter (1882–1949) were already, from Russia, pursuing a related direction, now also based in Paris. Alexander Rodchenko’s (1891–1965) future collaborator Liubov Popova (1889–1924) also stayed in Paris for a while; her Portrait of a Woman (l915) is rated still as one of the important works of the century. Nadezhda Udaltsova, (1886–1961) active in Russian Suprematist circles, also stayed for a time in Paris during l912-1913. Vera Pestel (1886–1952) joined them in the cercle around La Palette the studios of Le Fauconnier, Segonzac and Metzinger. But the arrival of Gontcharova in Paris in l914 sadly missed Sonia Delaunay, who with Robert had already left for refuge in Spain over the outbreak of war that year. There she made fruitful contact with Sergei Diaghilev (1872–1929). Significantly Olga Rozanova, (1886–1918) another Russian painter in Paris, lowered the colour palette in her paintings about that time, to the grey and ochre tones of Cubism of the period. Before leaving Moscow for Paris in l914, Gontcharova had encountered Marinetti on his rostrum, and was less than impressed, accusing him of ‘despising’ women. So Futurism was increasingly disparaged, from Apollinaire to practising Cubist artists, and seemed to lack intellectual probity: And it seems, the women painters, now a vocal and critical group, were the first to cast collective doubts on this vociferous movement. They represented a powerful undertow of scepticism. Inevitably too the Futurist, French’ Cubo-Futurists’, Russian Suprematist-Futurists, and British Vorticists had more drawing them apart than uniting them. Perhaps today, historically, we can look back and celebrate the persistence determinism and application of Gontcharova , Popova, and Sonia Delaunay: the latter two in particular in growing applied arts in principle, from painting as an art. That is how the later twentieth century came to recognise Popova and Delaunay. Politically perhaps they had little in common, but both had come, with Gontcharova from well-endowed Russian families established long before the Revolution, and eager for change. Sadly Popova died young, but Delaunay survived her husband Robert’s early death to achieve success as the first woman artist to have an exhibition in the Louvre (post-war) and received the French Legion of Honour. One can find in this exhibition her superb and influential early painting, Simultaneous Contrasts (l912). But like most artists in Paris courted by the Italian Futurists, she and Robert Delaunay ultimately rejected the Futurist tag. In the broader context however, they and the Russians can all be recognised as ‘associates for a while’, of the core Futurist movement. Nothing more, thanks to Apollinaire.

Looking now at the overall ‘hang’ of the Tate Modern exhibition, one finds it curiously bland, sotto voce, lacking in any of the audio-visual razz-ma-taz that the core Futurists would have themselves generated for such a show. It is a shame to have missed such an opportunity. After all, F. Balilla Pratella (1880–1955) was the only truly accredited Futurist musician, calling for “a violent break with the intellectual mediocrity, commercial degradation, and hatred of the new which reduce Italian music to a single and almost variable form of vulgar melodrama”. He advocated the use of atonality, rhythmic irregularity, intervals smaller than a semi-tone. His first composition in this vein, Musica futurista (1912), remains an historical curiosity. But that makes it all the more appropriate for this exhibition. Another Futurist, the painter Luigi Russolo (1885–1947), not a trained musician, contributed to futurist ‘lore’ an assemblage of ‘intonarumori’ (noise-machines), which could usefully have been recreated here, with good and appropriate effect.

A serious omission also in the exhibition is a better, more fulsome demonstration of the work of Giacomo Balla, (1871–1958) such as his Abstract Speed series (1913–14), or his wide range of experimental and formal studies. (In the famous Futurismo & Futurismi, exhibition in Venice, there were no less than 65 Balla works, albeit amongst several hundred others). But, to close here on a positive note, one of the triumphs of the Tate Modern exhibition is the Futurist sculpture included, such as Boccioni’s, Development of a Bottle in Space (1912). There is also, appropriately enough, Jacob Epstein’s Torso in Metal from The Rock Drill (l913–14). One is reminded thereby of the Tate’s acute perception in acquisition, on seeing their l980 acquisition of Sonia Delaunay’s, Prose of the Trans-Siberian Railway and of little Jehanne of France (1913), incorporating in a superbly narrative exposition of a journey, a collaboration with the poet (and great friend) Blaise Cendras. This was a ‘simultaneous’ book, 195.6 x 35.6 cm, a “poem-painting”. This work serves to emphasise, for this exhibition too, the collaborative mode of the persevering and committed women artists who engaged with the Futurists and Cubists in Paris. They, ‘Futurisme’ such as they temporarily were here, perhaps can be said to have saved Italian Futurism from ultimate relegation and disillusionment by infusing some humanism into the debate. Fortunately the exhibition period ceases in 1915, thus removing any need to refer to the post-war pro-Mussolini sympathies of Marinetti. The Futurist adulation of War was questionable enough, a deterrent for most enthusiasts. 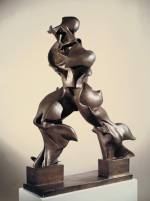 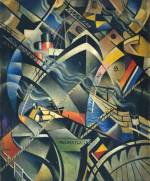 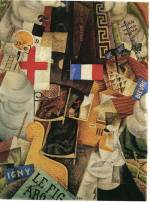