The Frieze Art Fair is many things: a spectacle, a film festival, a four-day extravaganza of talks, tours and projects. Primarily though, it is an opportunity to buy and sell art, and it excels at this, with sales profits of £33 million last year. But what, if anything, lies beyond and behind its commercial glamour?

This question seems to have exercised several of the artists commissioned by Frieze Projects this year. Mike Nelson's installation, 'Mirror Infill', took the fairgoer behind the glamour in a literal sense, through an unmarked door and into an alternative labyrinthine world that snaked through a hidden space between the gallery stands. It inverted the rules of the fair: aseptic white walls were replaced by dusty workrooms and abandoned institutional corridors, bright lights exchanged for the shadowy red of a dark room, the green glow of an exit sign, or a low-wattage extension bulb in its metal cage. The detritus that littered the benches and floor was that of an obsessive photographer, and pegged to lines across the low ceiling were hundreds of photos of the marquee under construction, ranging from piles of scaffolding to shots of the almost-finished temporary galleries.

Loris Gréaud, in collaboration with DGZ Research, furnished Frieze with an exhibition of nano-sculptures, invisible to the naked eye. This project was called 'Why Is a Raven Like a Writing Desk?', the title taken from the riddle without an answer that Lewis Carroll's Mad Hatter poses Alice in Alice in Wonderland. Just as Carroll's conundrum assumes there is a connection, and challenges the reader to suppose otherwise, so Gréaud's small exhibition was determined by the conviction that these invisible objects were actually there. As the sculptures were only a few micrometers across, there was no recourse to an 'independent' verification procedure, and the viewer had to accept that the theatre of gallery assistants, catalogues, dramatic lighting and stylish black display stands actually had a purpose. Disruption of scale is an effective technique for questioning received ideas, and this project prompted questions about the importance of the context in which a work of art appears. Sometimes, Gréaud seemed to be saying, the context can eclipse the work itself, even stand in for it.

Of course, this analysis is only appropriate if the art in question is an object, a tangible thing that can be given a price tag and shipped off around the world to an international buyer. The interesting thing about this year's commissioned works is that many of them weren't commodities, and so provided a suitable counterpoint to the objects in the commercial gallery stands. The excellent Resonance 104.4 fm (www.resonancefm.com) was again broadcasting on-site from a soundproofed booth, available to anyone who managed to catch the transmissions as they disappeared into the ether. Joanna Callaghan and Russell Martin, whose previous productions for the radio station have included 'Show Me the Monet',1 a series of conversations about art and economy's interactions, returned to this theme with two broadcasts entitled 'For Love & Money',2 for which they commissioned artists to work with ideas raised in the earlier series. I asked the two organisers about their intentions in programming the shows. Callaghan replied:

I really wanted to utilise the framework of the fair and the economic model that underpins such an event to produce 'product' that would never be sold. Hence, we commissioned artists to make work, though we gave little in the way of a brief. Since we could not pay the artists or sell their work in any conventional sense of the word, this allowed us to bypass notions of 'quality', saleability or value and explore a methodology of relations devoid of economic power, but which was situating itself inside an event entirely constructed around such power relations. A little bit of utopian rebelliousness perhaps.3

For Martin, it was important 'to work with other practitioners to present a unified or cumulative voice, or at least work towards one. […] In this way, we can avoid the complaining tone often witnessed in the visual arts - not getting paid enough money, not getting enough exposure, not finding support for non-material practices - and instead present our arguments and concerns cogently and intelligently to whoever happens to tune in. We can begin to talk.'

In terms of both visitor numbers and sales, Frieze is huge. The fair's organisers, Amanda Sharp and Matthew Slotover, revealed that they expected upwards of 10,000 visitors on the invite-only preview day alone. I asked the broadcasters for their take on this financial gigantism, and whether they thought it distorted public perception of art. According to Martin:

Without the phenomenal financial success of the YBAs and later artists, the visibility of the visual arts in this country would probably still be in a parlous state. But commercial activity is only a small part of what art used to be about - now a general perception that all artists earn huge sums of money from their practice has bred a kind of mistrust between people who practice art and those who don't, further removing art from the 'real world' whereas, in actual fact, art is as much a part of lived experience as beans on toast […] A friend recently told me he was talking to a London cabbie in his cab who, rather than ask 'What do you make?' when told my friend is an artist, asked 'Where do you show?' It's arguable which is the more sophisticated response - a mindset that states artists all make something, or one that thinks those things are always exhibited.

Yet Callaghan enjoyed the fair for its spectacular quality. 'Most of us were not there to buy work, we were there for the spectacle and I felt pleased for those artists and curators and gallerists who were able to profit from the event. Why shouldn't they?'

Both agreed that their critique concerned the system of which Frieze is a part, rather than Frieze per se. And it's certainly true that a lot of interesting work was on show at this year's fair, presented as always as part of a dizzying panoply of discussions, films, installations, consumption and display. Yet in this abundance of stimuli, a few works still stood out. Victoria Miro was showing one of Conrad Shawcross's large kinetic sculptures, which hummed and clicked a syncopated rhythm as its articulated wooden arms spun lit bulbs in complex, fairground loops. Do-Ho Suh, known for his full-scale recreations of domestic architecture in translucent artificial fabrics, had two works installed at the Lehmann Maupin stand. 'Floor' (1997-2005) consisted of glass plates supported by thousands of tiny plastic human figures, packed together and with their hands raised, Atlas-like, to the glass above them. This floor was surrounded on four sides by 'Screen' (2004), a mesh wall constructed from similar plastic figures, cast in a rainbow of colours and joined at hands and feet into a chain-link of X-shapes. Doggerfisher was screening a collaboration between Rosalind Nashashibi and Lucy Skaer, 'Flash in the Metropolitan' (2006). Shot at night in the New York Metropolitan Museum of Art, this short film revealed display cases of objects from Africa and Oceania, briefly illuminated by a flash bulb. Dramatic shadows and intense reflections of polished metal grew and then withdrew into darkness again, in a rhythm as ceaseless as the sea.

The five short films commissioned for the 'Artists Cinema' this year were also interesting. Manon de Boer, a Dutch artist living in Brussels, produced 'Presto - Perfect Sound', which showed the composer and violinist George Van Dam performing part of a Bartók violin sonata. The soundtrack was edited from several takes to perfect continuity, whereas the musician's head and shoulders occasionally jumped sideways on screen. The fierce concentration on Van Dam's face, his occasional flourishes and inadvertent twitches, together with the rich musical tones, made for a compulsive cinematic experience. Miguel Calderón's 'Guest of Honor' provided viewers with a mysterious short story, in which a family found a deer in the woods, and brought this symbol of wildness into their home. Meanwhile, Glasgow-based artist, Phil Collins, produced 'he who laughs last laughs longest', a documentary record of a laughing contest he set up in the US. Contestants competed for a cash prize by laughing continuously for as long as they could, eventually giving up in despair. All the commissions will eventually tour UK cinemas, showing before main features.

If the frenzy of the marquee became overwhelming, there were several avenues of escape: outside to the sculpture park perhaps, to wander between Tom Claassen's huge plastic rabbits, or gaze at Berta Fischer's complex folds of Perspex, or Roman Signer's kayak thrust into a pyramid of gravel. The talks offered escape of another sort, with some excellent speakers. I caught Liam Gillick proposing a series of 'findings' on contemporary art, and listened to an engaging debate on performance-based art chaired by Claire Bishop and broadcast live by Resonance (as were all the talks). Frieze may be commercially minded, but it has become a place where debate can flourish, and, thanks to the annual commissions, a place where non-commercial ventures can reach a wider audience. 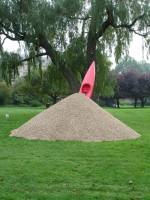 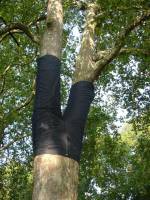