In only five years, Frieze has gone from a standing start to being a major fixture in the art world and beyond, to the extent that this year's fair was praised by James Purnell - the Secretary of State for Culture, Media and Sport - as, 'a world-class destination for contemporary visual art'.1 When political animals, wary creatures that they are, seem keen to jump on your bandwagon, you have a legitimate claim to having made it, and indeed the commercial and popular success of Frieze is indisputable. But where does this achievement leave the other arm of the fair: the projects, talks and special commissions that turn it from a trade event for collectors into a spectacle that attracts everyone from art students to academics?

This year's Frieze Projects curator, Neville Wakefield, described his commissions as, 'throwing sand in the Vaseline® of commercial art'. But when pressed on this point by Louisa Buck in an interview for The Art Newspaper he admitted that, 'the market is so omnivorous that it consumes any attempt to critique it'.2 While acknowledging that artistic dissent is eminently sellable, he nevertheless tried to commission works that could operate in the narrow space between rebellion and recuperation.

Not all of the commissions managed this successfully, but one of the best was Kris Martin's simple intervention. This called for fairgoers and dealers to observe a one-minute silence at 4 pm on the preview day, to turn off mobiles and electric devices and, 'refrain from activity in respect of the moment'. A hush duly fell over (most of) the fair, and for a minute at least, business was put on hold.

But it wasn't only commissioned artists who showed an interest in creating wasted time and money. Jake and Dinos Chapman were up to their live-art tricks again, though instead of painting portraits for £4,500 as they did last year, they were 'personalising', for free, £20 notes that people brought them. Notionally at least, they were asking people to take their own money out of circulation. In reality, the bank notes were probably worth more post-scribbling, and as the stunt enhanced the Chapman's reputation, they too were rewarded for their voluntary labour.

Nearby, the American artist Rob Pruitt had set up his own stall, with the handwritten sign, 'Rob Pruitt will draw on your money too'. This was part of the flea market he had curated for Gavin Brown's Enterprise gallery, which turned a corner of the fair into ramshackle stalls manned by artists peddling flea-inspired multiples. This mish-mash of artistic junk, from Tony Oursler's signed TV remotes at £50 each to Elizabeth Peyton's worn-out couch (as sat on by the artist), satirised the art fair much more effectively than any of the commissions. And yet it was at the same time an utterly serious (if loss-making) commercial enterprise, as the scrawled 'sold out' signs next to many of the pieces testified.

Some of the most engaging work at the fair steered clear of institutional critique, or at least approached it in a more oblique way. Frankfurter Kunstverein was running a series of performances in an arena built from scaffolding and cardboard, designed by Slovenian artist Tobias Putrih. The programme ranged from actors reading transcripts of the comedian Lenny Bruce's performances, to a Buddhist metal band, to the Swedish collective Ride.1 This trio were projecting films in which they reshot famous scenes from 'The Deer Hunter', 'Alien' and 'Jaws', and played them back alongside the originals. They also staged a chaotic performance in which a deadpan magician, a tarot card reader and a guitar-wielding busker in a monster suit all tried to engage the crowd simultaneously.

Frieze is not really the best environment to discover new contemporary art, though this didn't seem to deter the gaggles of art students wandering around with sketchbooks. Having said that, there was some interesting work at Khoj, a Delhi-based not-for-profit gallery, whose entry fee had been waived by the organisers. Two video pieces were especially interesting: one, by Ravi Agarwal, documented the marigold-picking economy of the Yamuna riverbanks while the other, by Shaina Anand, used cheap CCTV equipment to enable dispersed sections of the community to talk to each other and exchange views and gossip.

This year's stand-out project was Mario Garcia Torres' work, 'I am Not a Flopper Or …' The young Mexican artist promised that 'film auteur Alan Smithee' would deliver a keynote lecture, 'elaborating the complex relationships between his public persona and the long filmography for which he has become known'. This beguilingly misleading introduction failed to mention that Smithee is a pseudonym, used by directors when they want to withdraw their name from a film. Starting from this premise, an actor playing the part of Smithee delivered a fascinating hour-long monologue which veered from meditations on failure and shame, through digressions on acting and spontaneous order, to questions of time and existence. More than an abstract conceptual argument, this was a compelling piece of theatre that brought a shadowy name into brief bodily existence, and fully deserved this year's Cartier award.

What with Torres and the Frankfurter Kunstverein, performance art was a significant feature of this year's fair. Another performance-based piece was Gianni Motti's commission, which involved a policeman who could be found doing yoga exercises around the site. But this intervention, a tongue-in-cheek call to 'maintain inner peace' in a security-obsessed age, was less subversion than sideshow. There were other projects that played off the carnivalesque atmosphere: Janice Kerbel printed large circus-inspired posters that were roughly pasted to the walls every day, promising characters such as 'Iggy Fatuse', 'the human firefly' and 'Faint Girl', 'swooning in the face of any untruth'. Meanwhile, Lara Favaretto had invited the Queen to the fair; perhaps unsurprisingly, she declined the invitation, and her personal secretary's polite letter was pinned to one of the trees that poked up into the vast arena. No one seemed to mind though, as the fair continued with its usual frantic business in spite of its absent guest. 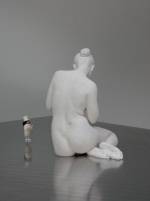 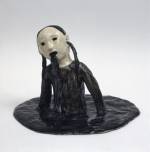 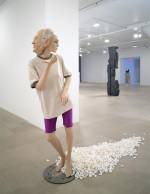