A pulse of eroticism runs through this collection of Sinsel’s new work, as he teases the distinction between painting and sculpture, using materials ranging from the ordinary to the rarefied

In the main gallery can be found one of Sinsel’s large-scale paintings. For the piece, Sinsel has woven together strips of linen on top of a canvas that follows a logic similar to that of a loom – warp / weft, up / down – forming a tightly gridded surface. A translucent green ribbon winds its way across a black background, locked into the raised tiles. Illusionism has long been an important aspect of Sinsel’s practice and he continues to work with it here, deploying an impression of space more constricted than in his previous works. The ribbon brings to the fore the tension in Sinsel’s painting, both physical and conceptual: the tightness of the weave, the struggle between illusion and flatness, painting and sculpture.

Sinsel deploys this weaving technique elsewhere in the work on show at Sadie Coles: in a smaller piece, he has delicately threaded together dozens of hazelnut shells. The white thread is almost imperceptible against the white background but, when observed up close, an incredibly intricate and complex weave is revealed, the shells carefully punctured by the threads and tied between overlapping threads. In another piece, Sinsel has woven together strips of paper and painted a watercolour, honey-golden oval on to them, the paint pressing into the gridded surface like the green ribbon of Sinsel’s canvas, working against its material form.

Suspended around these walled, woven works is a sculpture: two almandine garnets (gemstones with a naturally faceted shape) enclosed by a brass, gilded cradle, which hang from the ceiling in an almost-symmetrical pairing. The filaments of brass that enclose them provide protection, giving the garnets a quality of vulnerability that contrasts with their physical resilience. They resemble precious objects, an historical relic, a rare pendant, or parts of the human body: testicles, lungs, fists. The sculpture points to a dominant motif in Sinsel’s work – the delicate line between ornament and life form. It is a motif that can also be seen in the threaded hazelnut shells, which, enclosed behind a glass frame, have a fragility that is more apparent than that which the garnet pendant suggests.

Sinsel’s work plays with the distinction between organism and object, a quality that goes hand-in-hand with the pulse of eroticism that runs through the collection. In another large-scale painting, he has painted circular forms that float in the corners of the canvas. Separated by a centreline are two white orbs, unsymmetrical, each bejewelled with a small nodule of pink corral, nipples that are obtrusively erect against their moderately abstract background. Nipples can be found elsewhere in the show; in the upstairs gallery is one of Sinsel’s smaller works, a canvas of calf parchment with nine circles of green, lead-crystal glass, each with a small, udder-like nodule at its centre. The glass circles are bordered with an imprecise rim of white paint that breaks the formality of the otherwise geometric work. One is swashed with bright red paint, another with brown, working against the purer aesthetic of the piece.

The use of calf parchment points to Sinsel’s heightened interest in the material surface of his works, and particularly the way that various meanings can be implanted in to materials. For two of his new works, Sinsel has used deer skin, shaped in the style of a canvas, as a painting surface. Like the calf parchment, the deer skin is translucent, a quality that makes it even more susceptible to being marked by meaning. The spotted pattern of the deer skin delicately shows through both canvases, the fragile outline of a spine forming a centreline. Sinsel has marked the skin with a translucent layer of bistre ink; on one, another ribbon crosses over in angular, rigid lines; on the other, two circular forms float apart. Although different in shape, the two inked forms are not dissimilar in concept: both ends of the ribbon meet (like the green translucent ribbon that appears on the woven canvas), creating a continuous, circular loop. The ribbon reappears in Sinsel’s work at Sadie Coles, recalling his earlier pieces in which he painted endless loops of unravelling bands. Their circularity, or endlessness, points to a space in which meaning is open for deliberation.

The smallest of Sinsel’s newest works, however, suggests a slight divergence from this motif of endless meaning; painted on to the canvas is a pink shredded ribbon, dissected into fragments, which floats against a monotone background. The vertical edges of the canvas lean in parallel at an angle which, in unison with the swirling pieces of ribbon, give the piece the illusion of movement. In effect, meaning becomes fragmented and airborne. Elsewhere, Sinsel leaves gaps in his work that point to an absence of meaning, spaces in which meaning has been lost. Like the accumulation of pressed leaves on to paper and linen, naturally stamped with holes, which appears more decorative than meaningful. Or, back to Sinsel’s overlapping strips of paper, linen and thread, where absence is naturally carried in the binary system of the weave – on / off, material / immaterial, present / absent – leaving areas of ambiguity. 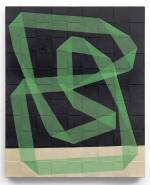 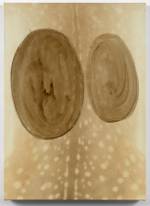 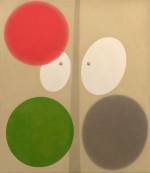 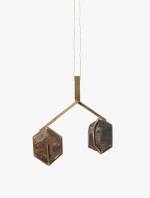 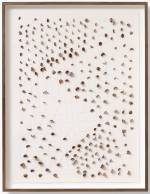 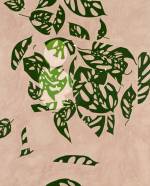 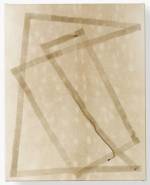 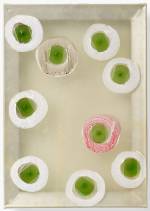 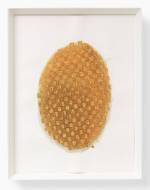 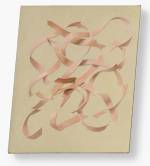