For his second exhibition at Sadie Coles, the young American artist eschews canvas and paper, drawing attention instead to the material properties of paint, and producing a dazzling feast of vibrant colour and captured movement

When we say an artist is “showing their work”, our meaning is usually taken as obvious. For Ryan Sullivan, however, this phrase is doubly relevant: in his second exhibition at Sadie Coles HQ, Sullivan draws our attention to the process of painting rather than its final incarnation, and to the material properties of paint itself. We are not presented with two-dimensional images on canvas or paper: instead, we see the product of a slow accretion of layers, painting transmuted into sculpture. As the artist told Interview magazine in 2013: “The whole point of having these layers is to create this object that has a physical potential of its own.”

Ryan Sullivan (b1983) studied at the Rhode Island School of Design and lives and works in New York City. Following his first solo exhibition in 2012 at Maccarone in his native city, the young artist took his practice to farther flung destinations, showing his work at the Hydra Workshop, Hydra, Greece, and providing the inaugural exhibition at the Sadie Coles HQ gallery on Kingly Street, London, both in 2013. In 2015, he held a solo exhibition at the Institute of Contemporary Art, Miami. Over the course of these shows, Sullivan has consolidated his reputation for producing abstract, often large-scale works created by applying layers of paint to surfaces during extended periods of time.

Sullivan is working within a tradition of painting that embraces (the appearance of) randomness, brought to popularity most notably by Jackson Pollock, while the sheer density of colours, shapes and patterns on show calls to mind the abstract work of Gerhard Richter. The exhibition’s title refers to the two types of paintings exhibited here, “wave paintings” and “flat paintings”. In both sets, Sullivan has employed a novel method of casting paint: using either flat or undulating silicon rubber moulds placed parallel to the floor, the artist applied layers of paint in strokes, flicks and pools. The colours and layers are allowed to intermingle and spread according to the topography of the moulds. Once finished and set, the works are extracted from the moulds and mounted to the wall; the flat paintings are reinforced with a thin fibreglass backing, while the wave paintings possess enough volume to stand as naked slates of compressed paint.

In the past, Sullivan has used canvas and paper as bases; for this exhibition he has complicated his method in order to strip his final product back to the bare essentials, bringing into focus paint’s potential to work in three dimensions. The flat paintings do indeed have volume, just – only a few centimetres thick, they are at once fragile, self-contained glass-like panes and dense, stony slabs. If you view them from the side, you can peek at the many layers of colour that make up the hidden interior of the painting, while the surface retains an enticing degree of translucency. Visitors will find themselves leaning in very close, better to make out the smudged, seemingly windswept islets of black encased behind the teal tea-stain surface.

The works, all untitled, offer a dazzling range of vibrant colour and captured movement: sweeping strokes of bottle green are pockmarked with entropic lime bubbling up from underneath. An abstract black shape rests on a turbulent background of marbled cream and aquamarine. One painting figures a large off-white blob, flecked with grey and orange, outlined in black with an orange proboscis reminiscent of the head of a horse or a dog. The paintings are deceptively visceral: beneath their delicate, reflective glaze lies a raucous tectonic landscape of interlocking boundaries, pools begetting dribbles and rivulets, giving way to broad washes of diaphanous pigment.

The language of geology is all too tempting when describing Sullivan’s work. Previous pieces have invited comparisons with satellite imagery and lunar landscapes, but something different is at work with these smooth, glassy paintings. The artist has previously used latex to agitate the surface of the paint, forming patterns reminiscent of mountain ranges, as well as tilting the paintings, inducing the semi-dry paint to sag into rippling patterns. In his new wave paintings, the artist has sought to reduce his presence in the work still further, abandoning this intervention and leaving the paint to mix haphazardly in the undulating mould. When the paintings are displayed perpendicular to the floor, the paint seems to defy gravity, racing up to the peak of a wave before halting and dribbling back down to its accompanying trough.

The thickness of the wave paintings varies from about two to nine centimetres, and their glossy surface accents their curvaceous profile. They are more playful than their flat counterparts, boasting neon colours, chaotic contrasts and, when the light is right, reflections worthy of a funfair mirror. Rendering paint in three dimensions isn’t in itself a particularly novel approach: Jay DeFeo’s The Rose comes to mind as a well-known example, along with the works of Frank Auerbach, and many of Anselm Kiefer’s vast compositions make dramatic use of lumpen, viscous gobs of paint. What marks Sullivan’s work out here is that he has devised a method to remove the canvas entirely, letting the paint stand alone, obelisk-like. As he told the New York Times: “There’s something closely linked between the image that you see, the process of making it and the material. There’s nothing else. There’s no subject matter tacked on top of that, it’s much more about how closely those things can be bound together.”

This exhibition is a visual feast: the paintings are so captivating because their frenetic shapes and patterns call to mind many associations while conforming to none. They reward observation at a distance and up close, and Sullivan’s creative methods cry out for more detailed documentation (a new book on his practice, published by ICA Miami and Dancing Foxes Press, is forthcoming). At Sadie Coles, Sullivan has developed his previous ideas in a logical and fertile direction; visitors will leave finding themselves newly attentive to what he does next. 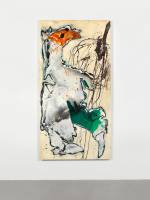 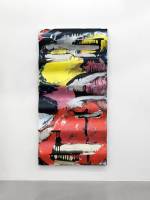 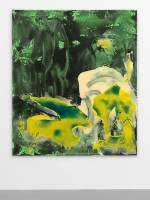