Miami Art Scene May 2021 – leading America’s obsessive, overdue, and necessarily over-weighted attention to diversity, the focus on Black Art has morphed from moment to movement 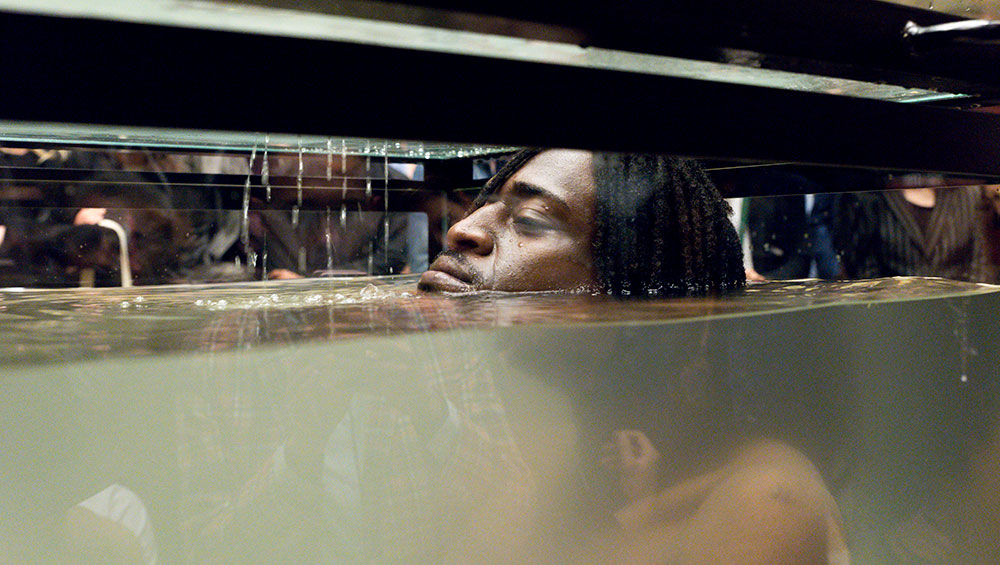 In the US, travel restrictions and ticketed admission may have slowed viewing up north, but in Miami, say the curators and gallerists, local attendance has never been higher. They credit relaxed strictures and lives lived outdoors, but I see it as political correctness that has opened collecting to unexplored talent. It is a happy irony that the public and critics alike have embraced the flood of Black artists, initially signed on for wokeness, with an unqualified enthusiasm that has taken dealers and exhibitors by surprise. Border-art, as one collector I know names Latinex art extending to the Caribbean diaspora, had long fleshed out local collections, but while auction records were being made by the likes of Modigliani and Jeff Koons, the western canon remained dominant. As recently as 31 March, the Financial Times published a full-page rumination on the 12 most viewed artworks in London’s National Gallery – all depicting a world that was elitist, established, and, for the historical reason of stifled diversity, White. England’s is a different culture, of course, but not alien, so it startles that across the Atlantic, seen alongside the eruption of Black art, even a masterful Titian, a gorgeous Botticelli, an accomplished Constable, a consummate Velázquez, look frozen in time. 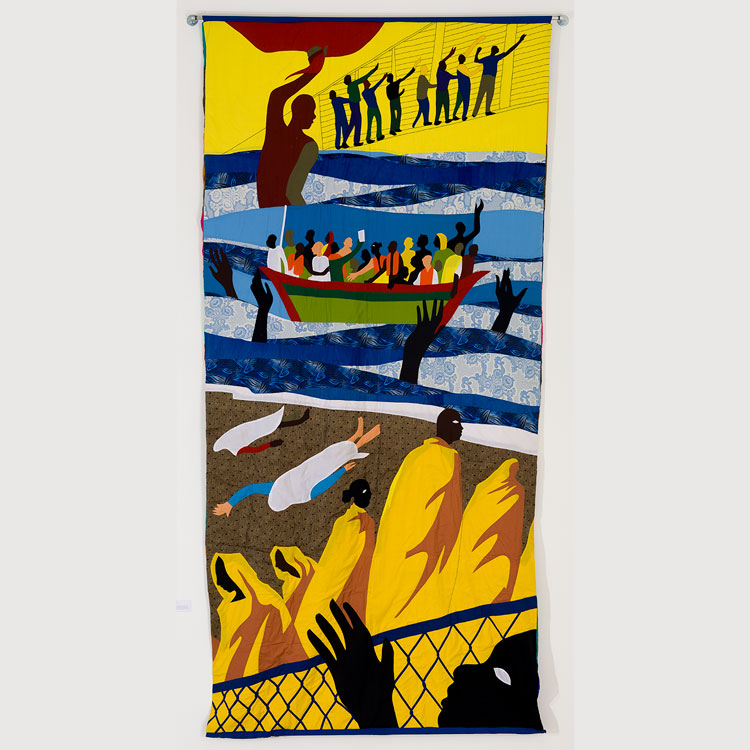 True, the ground of museum-worthy work was well laid out nationally some years ago, by such first- and second-generation African American masters as Jacob Lawrence, Romare Bearden and Charles White, followed by Sam Gilliam and David Hammons. What marks Miami’s explosive come-out-of-the-woodwork display is sheer numbers – a virtual army of the African diaspora. 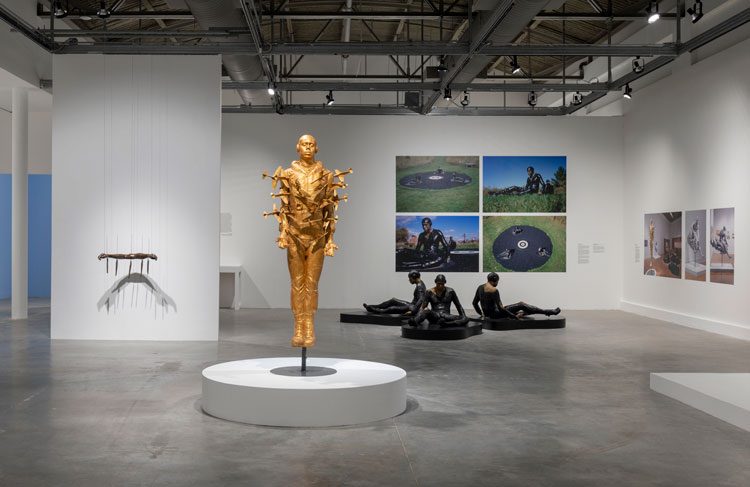 Not to miss, at the Museum of Contemporary Art (MoCA) in North Miami, Michael Richards: Are You Down?, a searing retrospective of a short life aborted 20 years ago on the 92nd floor of the World Trade Center Tower One, is dominated by the eponymously titled, Caribbean-inflected bronze and concrete racial allegory pinning three men to a target, and Tar Baby vs St Sebastian (1999), a suspended martyr to prejudice wrought of resin and steel. 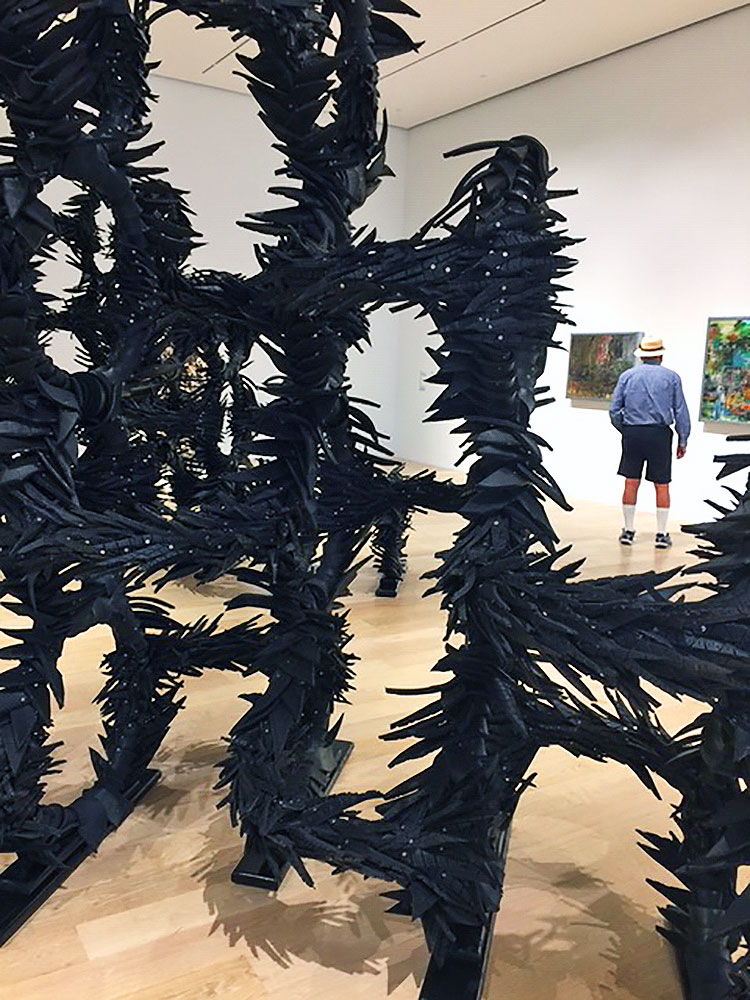 Spun off from MoCA – “decamped” is the better word for the rupture resulting from an ugly dispute – the built-from-scratch Institute of Contemporary Art (ICA) opened four years ago in the Design District with a programme of local and emerging talent extending to vibrant mid-career African American artists such as Senga Nengudi. Up now is a long overdue solo show of new work by Chakaia Booker, who hit the ground running – literally – in the 1990s with sculptures fashioned from cast-off truck tyres that probed the dark side of road trips theretofore held heroic. The monumental walk-through installation assembled from the materials implicated in slave labour and ecological meltdown is jaw-dropping, but more involving are her smaller works, which fold rubber and plastics into a poignant, biomorphic, form of portraiture.

One floor up, Rats, Janiva Ellis’s first solo museum show, lifts the African American artist from “emerging” to “arrived”, with surreal takes on the Black female experience that border on abstraction. If not all are accomplished (I couldn’t determine the supposed references to religious painting, and the portraits don’t rival in technique those by, say, Amy Sheridan), the jittery brushstrokes convey a compelling dis-ease and lingering sense of a world off-kilter.

Featured in the lobby, the Cuban-born, Puerto Rico-based artist Dalton Gata bridges the worlds of painting, sculpture and fashion to people his first museum solo show with cross-referenced, non-fungible-token-ready images of queer and popular culture – surreal, stitched and draped archetypes of the Caribbean diaspora.

Bucking the pandemic-induced book-ahead policy, there is no social distancing at the Rubell Museum (the sprawling white-wall conclave housing the 7,000-plus artworks that Don and Mera Rubell have relocated to the Allapattah neighbourhood, with the unspoken intention of making the blighted area Miami’s new Wyndwood). Thankfully, the maskless and irrelevantly chic crowd forks off to the inhouse, see-and-be-seen restaurant, leaving the culturati free to commune (admission $36!) with the art.

Spiking a familiar lineup of such as John Baldessari, Anselm Kiefer, Cecily Brown, Richard Prince, Barbara Kruger, George Condo and Jenny Holzer are thrusting works by such upcomers as Oscar Murillo and Allison Zuckerman; provocateur statements in the tradition embraced with Charles Ray by such as Jordan Wolfson and Ryan Trecartin; and commissions made in situ by artists-in-residence (lately Ghana-born portraitist Amoako Boafo and the so-called urban expressionist, Genesis Tramaine).

The weighted African American florescence (more credo than bandwagon, given that the Rubells have been championing Black art for years) includes Class of 2007 (2007), a surreal diversity-within-diversity collage by Nina Chanel Abney; Guernika (2014), a monumental re-interpretation of Picasso’s masterpiece by Lucy Dodd; one of Mickalene Thomas’s subversively sparkly innuendo portraits; several of Rashid Johnson’s black wax and soap explorations into black male identity; an early pre-team-fabricated portrait by Kehinde Wiley (Black art’s ubiquitous Alex Katz); and a wrenching encounter with the deceptively naive poetics of the yet-to-be-lionised Purvis Young. 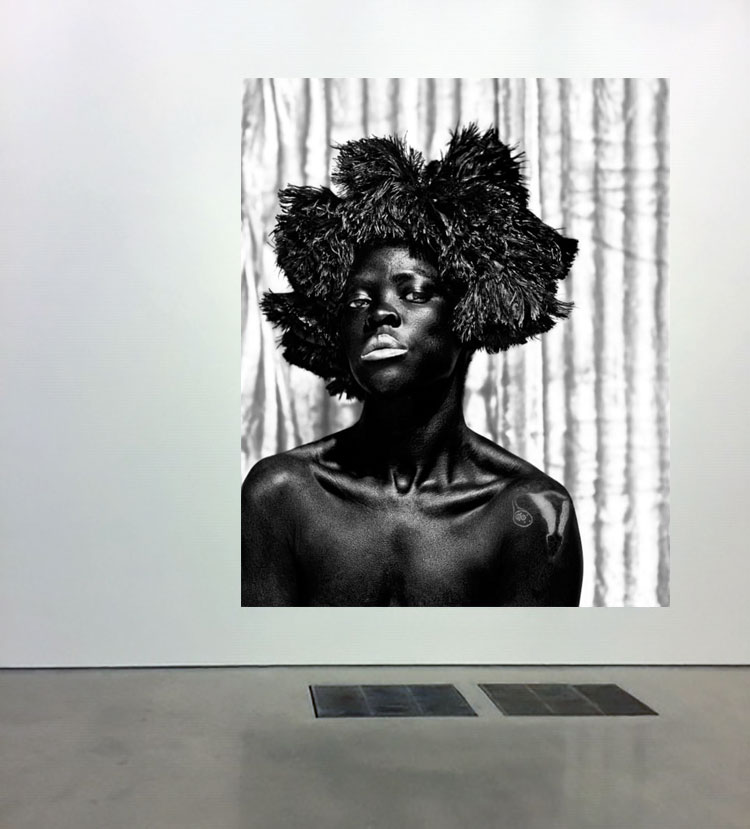 Helmed by Franklin Sirmans, the storied Miami Art Museum, rebranded the Pérez Art Museum Miami (PAMM) after the real estate mogul Jorge M Pérez came to its rescue, has all but officially become the godfather institution of the African diaspora. How ably Herzog & de Meuron’s airy spaces accommodate its marking new acquisitions! A high-attitude, large-scale self-portrait by Zanele Muholi (Faniswa, Seaport, Capetown, 2018) segues past a doomsday textile by Christopher Myers to a deceptively soothing video merging Buddhist chant with Southern Black Baptist gospel and blues, by social activist Theaster Gates (Breathing, 2010). Multimedia works (My Body, My Rules) by 20 female artists, assembled to give agency to women’s right to control their own bodies, cast a feminist lens on body politics that is so visually gripping as to almost override the heavy messaging of physical and psychological violence. 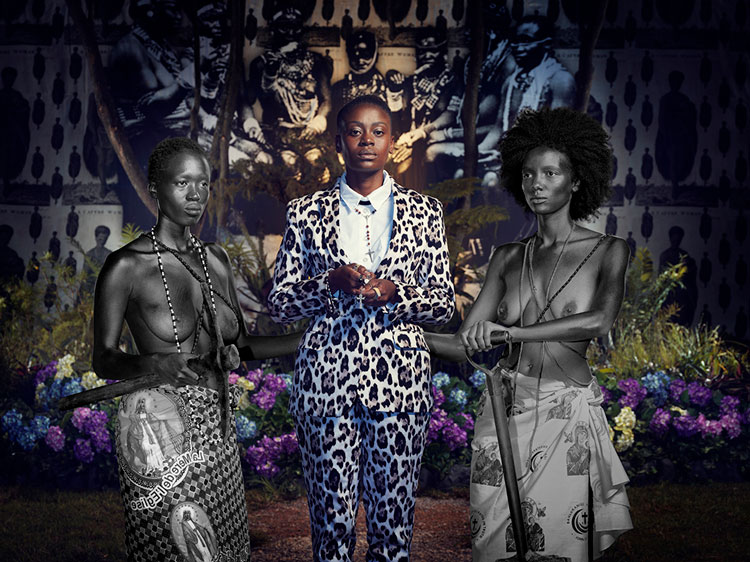 Leave El Espacio 23 for last, as, like a pervasive perfume, the installation will linger in memory. Held over by lockdown to serendipitously synchronise with the art posted at PAMM, selections from the private collection of Jorge Pérez (aptly titled Witness: African Perspectives) speak to “a transgression … a euphoric regenerative instant, a season of restitution”. “One bears witness,” it proposes, then asks: “At what point is the witness implicit? To what extent are time and space an intermediary, challenging the boundaries between truth, myth, imagination and utopia?” So compelling are the wall texts and the philosophy that informs them that it almost shocks that the art they support is so strong. In a section called “Nervous Conditions”, Kudzanai Chiurai redresses co-opted traditions (We Live in Silence, Vl, 2017). “Spirituality’ is represented by María Magdalena Campos-Pons with a large depiction of religious symbols melded into an altar (Finding Balance, 2015). 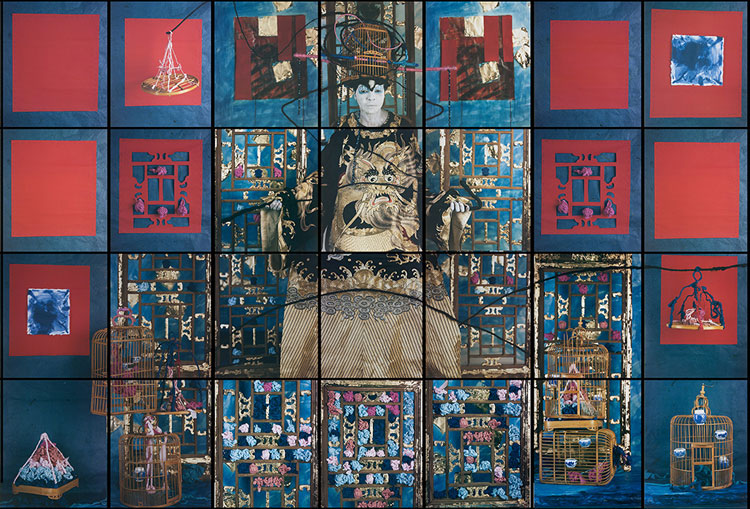 Of no less interest or curatorial effort are two still very private collections, though both are open by appointment to those in the know. That of Craig Robins, nested into his office in the Design District (the urban hub that he masterminded from a backwater to the big game in town), is a constantly evolving exploration of burgeoning talent collected as much to learn from as to encourage. Placed alongside highlights by artists collected in depth over time (Nicole Eisenman, David Hammons, Kai Althoff) is newly acquired work by Black artists attached to the collection early on (Henry Taylor, Njideka Akunyili Crosby, Mickalene Thomas), spiked with what Robins calls “fun stuff” by mordant raw talents. 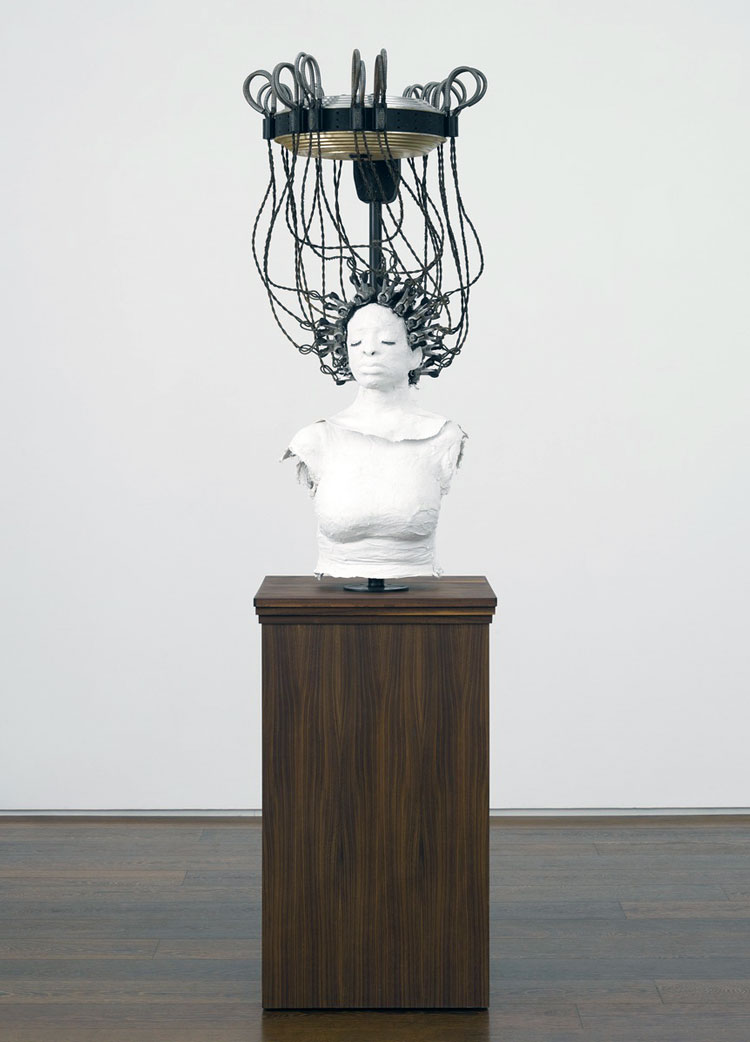 At once hilarious and horrifying, Hair Peace, by shooting star Karon Davis (four solos shows since 2018, that with Jeffrey Deitch “the best exhibition that I’ve presented with an emerging artist ever”) conflates the punitive torture of slaves with the elective torture of the beauty parlour. Bellyphat (2016), one of Tschabalala Self’s stitched and painted abstractions of fetishised body forms, reworks racial prejudice into a celebration of the Black body as spirit, as social mover, as life itself. 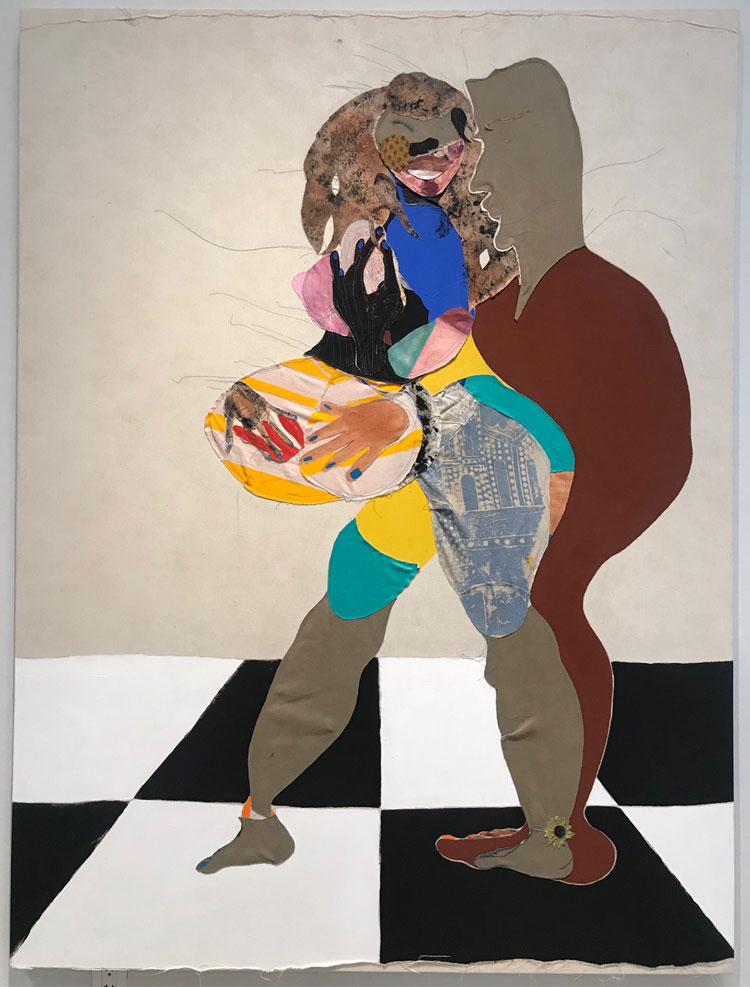 To fully experience the deep penetration of Black art into enclaves of white privilege, detour to West Palm Beach to view collector Beth Rudin DeWoody’s new installation. Given pride of place below a gallery lined with scatalogical material and another featuring a thoughtful meditation on art in architecture that photographer Firooz Zahedi sourced largely from drawings and silver-prints, are penetrating portraits by Amoako Boafo and Jerome Lagarrigue. 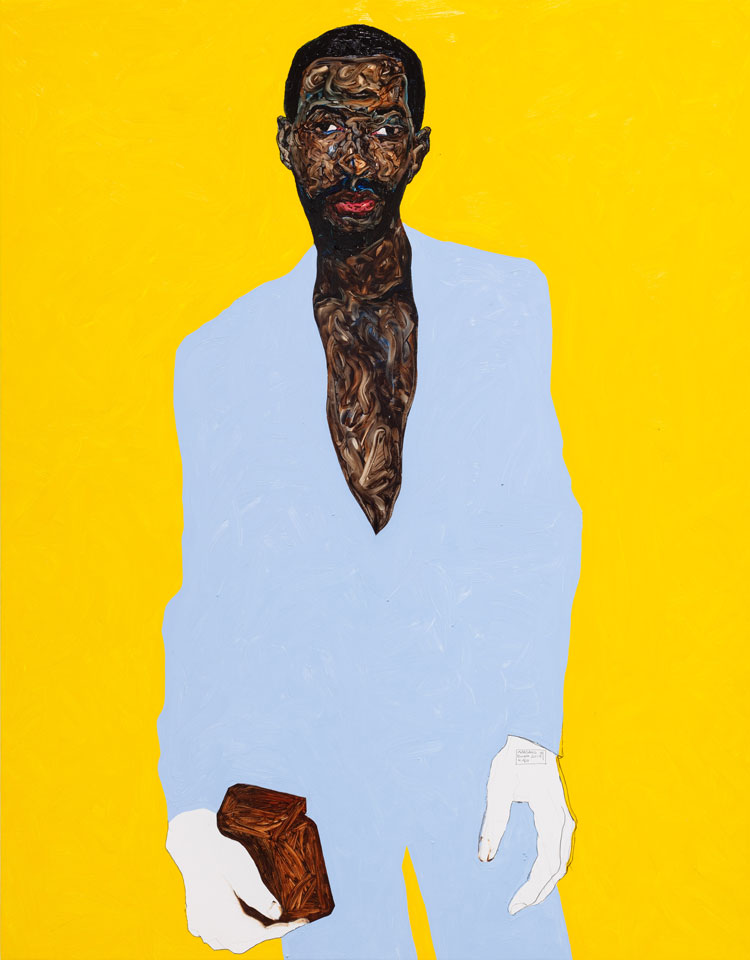 Notable work at the galleries I toured (credit the many survivors to low overheads): at Fredric Snitzer, pulsing street-life portraits by Cameroon artist Ajarb Bernard Ategwa; at the Nina Johnson Gallery, irrepressible, bittersweet, primary-colour portraits by Ray Veasey and fellow self-taught Creative Growth artists reframe the limiting designation of “outsider art”; and at David Castillo, a series of the signature text paintings undertaken by mid-career solo-show veteran Xaviera Simmons to give language agency and to delineate the erasure and retelling of female Black identity in order to “change the way we interact with history”. 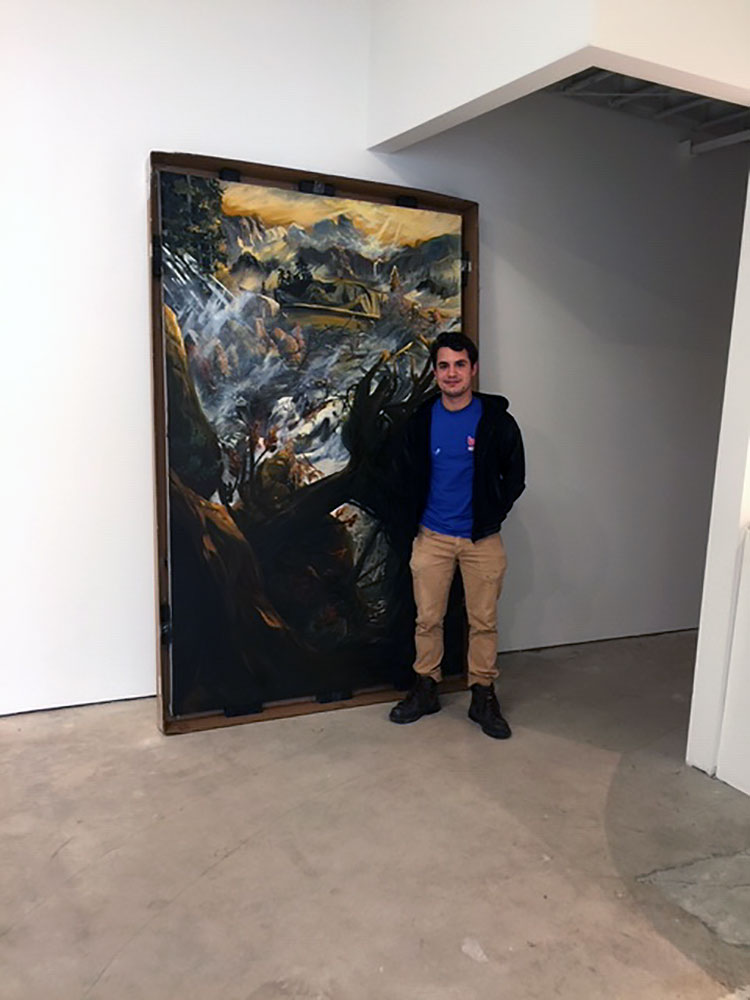 Call it pervasive – even overwhelming – but know that Miami’s Black moment is neither cynical nor absolute by the number of featured artists who cannot be categorised; at Emerson Dorsch, where I had thought to view local artist Onajide Shabaka’s new counter-narratives (his last one about owing America’s rice culture to female African slave labour), I encountered instead a roiling, fresh-off-the-easel painting (Sinister Calm, 2021) by Ernesto Gutiérrez Moya that was leaning against the wall like the backdrop for Armageddon. 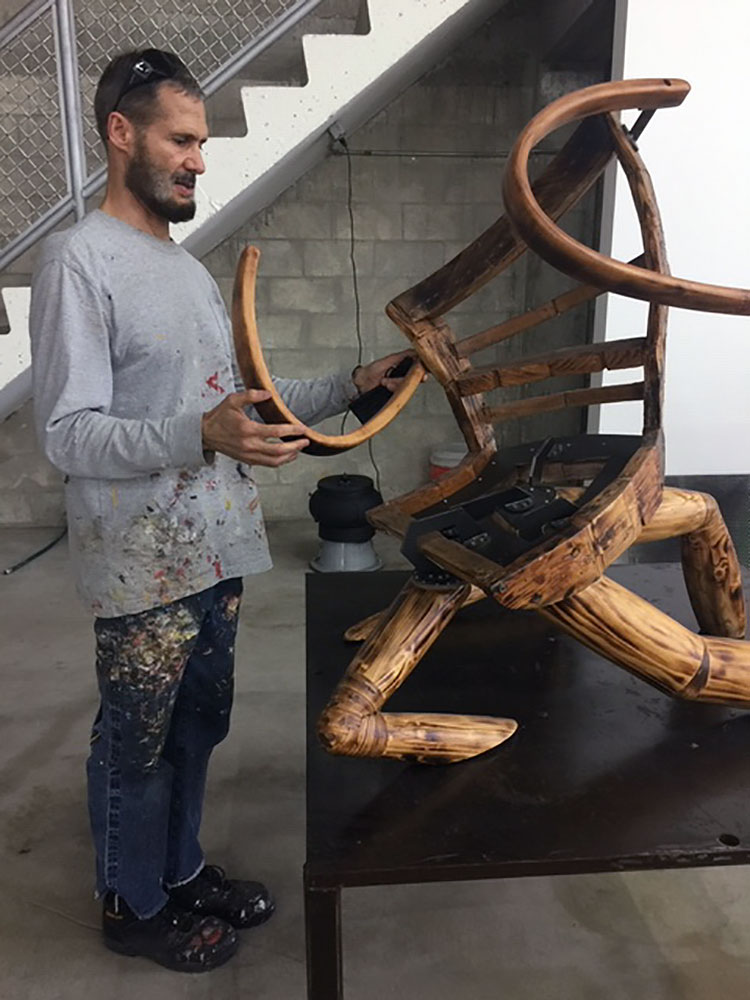 My last day was given over to studio visits – one of the joys of touring art in Miami, thanks to easy access to warehouse spaces that, for the unrepresented, can double as galleries. A standout is the repository in Little River taken over by the mid-career painter/sculptor Hubert Bush to enable and harbour a staggering output of work involving enormous physical effort and a singular vision. Imagine, a massive metal table built from scratch holding used tools rescued from far-flung entrepots; abstract forms composed of laminated woods or painted metals wrestled into humanoids that perch on old car seats or wander into the void; a Biedermeier chair that Bush stripped, dismembered, carved, and reassembled to flail against a metaphysical adversary. I wondered fleetingly whether he would have found gallery representation more readily had he been Black.