An invitation to play – subverting the fixtures of social anxiety.

“…When we are moved and have discovered or learned to funnel the mucous of situations that happen throughout our generational lives, we have the capacity to be victorious, slaying wrong perceptions and ill-fitted social anxiety.”1 So writes the artist and poet Theaster Gates in his text on American artist Ellen Gallagher.

Gallagher’s first major UK solo exhibition AxMe is now showing at Tate Modern. The word Axme “is a play on the black American vernacular for ‘ask’ .. [and]..the name of the [fictional] Acme Corporation…that supplies Wile E. Coyote with … devices to capture Road Runner”2, thus underlining Gallaghers playful and richly multifarious practice. Exploring “a diversity of sources …[within] a varied and abundant oeuvre”3 Gallagher shapes issues of African American narrative into a cross-cultural everyday. Gates understands how Gallagher’s warmth reaches beyond regressive perceptions, and while focused on the “presence and absence of black history”,4 pushes past social constricts, reflecting fresh views of shared narratives.

Likening her methodology “ to the repetitions of jazz …retuning to the constant musical narrative…in a variety of different ways,.” it is; so Professor Mary Evans (Visiting Professor LSE Sociology and Gender) Gallagher’s “variety of ways, and the absence of an over-determined understanding and portrayal of the past, that make this exhibition so engaging.”5

Gallagher’s exhibition begins with a temptation to scribble all over the walls. The opening space is papered (from floor to ceiling) in pages from children’s penmanship exercise books – dotted lines that guide handwriting across a page. The itch to mark (only controlled for this author by a nervous gallery attendant) is satiated by Odalisque (2005). Part wall-drawing part projection this excellent example of Gallagher’s engaging humour, hovers in front of and interacts with the papered wall. Having taken the place of a life model clad in harem dress, Gallagher (neither slave nor concubine), in repose on a daybed, is eying Matisse. But this is not Matisse as (Man Ray photographed), instead it is Freud being studied by Gallagher while he, intent on not looking at her, examines his notebook. This marvellous image contains a labyrinth of readings. “…mischievously tweaking racial and gender politics …” “Freud’s fascination with a lost past,”6 the problematic relationship between sexualised model and male artist in fine art his story, and if Matisse was back at his drawing, this image also references a major change on the brink of crashing in to Modernism.

Writer John Elderfield7 describes a film of Matisse, in the process of drawing Young Woman in White, Red Background (1946) (a young women reclining on a chaise-lounge). As Matisse holds his brush between himself and his paper, his hand momentarily gestures the outline of the woman's head, before laying down the mark. Elderfield relates that when Matisse saw the film8 he said he felt "suddenly naked", because he saw how his hand "made a strange journey of its own" in the air before drawing on the model's features.9 So this multilayered image could be said to herald the actions and performances that emerged through the 1950s and 60s in fine art practice challenging the hallowed position of the painter in his studio. And we might wonder what Gallagher’s Freud has hovering over his page, what gesture he might make as he attempts to fix it to the surface, and whether seeing himself so studied by this fearless intelligence he might also feel suddenly naked. What a joy to imagine how Freud might respond if he looked up to see Gallagher studying him so intently.

The Yellow paintings – details of which have often been used in publicity and reviews for Gallagher’s recent exhibitions are more fascinating in life than the single documentations suggest. Each large picture contains over 300 separate images. Found photographs of African American headshots, embellished embossed sculpted and  decorated with paint and plasticine. Richly tactile their thick surface takes us back to child play and the school room again – yet all these many images, fixed between the 40s and 70s, of skin lightening creams and wigs, reflect a time of troubled identity, race history, civil rights and women’s rights; when Mad Men-type advertising agencies10 held a tight hold on the aesthetics of identity and women wore missile-shaped bras.

Gallagher explains “The wig ladies are fugitives…from another time and place…liberated from the race magazines of the past…I’ve transformed them here on the pages that once held them captive.”11

Bird in Hand (2006) has Gallagher combining Melville’s Moby Dick character, Captain Ahab and Peg Leg Bates12, into a massive Straw Peter-type presence, collaged in plastacine and various printed papers, this haunting figure is another example of Gallagher’s richly layered cross culturally sourced images. And while Gallagher leads us from her Black Paintings (1998–2002) – where little is revealed  apart from the glossed reflection of the viewer consumed into the darkness – into an open white space filled with lyrical watercolours of various marine organisms “reminiscent of pages from a scientists note book,”14 we are; as though led from night time into a white garden, reminded how ‘dark and light’ (words so deeply embedded into our language) not only describe racial identity, but also determine the condition we are in and the spaces we all inhabit.

Gallagher’s refreshing viewpoint; echoes that of the African American artist William Pope L. Self proclaimed as “The Friendliest Black Artist in America”,15 Pope L also uses humour and the surreal in his performances to push us to think beyond the monstrous obscenities that haunt the African American narrative. Yet as Cynthia Carr reminds us in her essay on Pope L’s 1991 performance Tompkins Square Crawl, racism has embedded into the reception of a work by an artist of colour the representation of all peoples of colour. Carr explains a “…spectator was distressed by what he saw as the compromising and demeaning position that Pope L was taking, crawling along the ground on his stomach wearing a suite. And the fact of a white cameraman recording this black man’s act…Chris Burden once crawled down the street through broken glass but he had the privilege of being identified as an artist – or a lunatic – not the representative of all white people.” 16

Whether the 22 years between Pope L’s Tompkins Square Crawl and Gallagher’s Axme exhibition, have gone any distance towards shifting the individual or collective reception of works by practitioners of colour, is impossible to estimate. But Gallagher’s works, rather than forcing a bitter pill of heinous narrative on her audience, exude a warmth that entrances and enticing us to better understand the troubled story of difference between and among peoples, and to dance forward together with more grace and mutual care.

6. Professor Mary Evans, ‘Dr Freud Meets his Interloper’ in The Times Education on Line, 16 May 2013

13. Heinrich Hoffmann Der Struwwelpeter (1845, Shockhead Peter or Slovenly Peter), a cautionary tale of a boy, who had bad manners http://www.kirjasto.sci.fi/hhoffman.htm 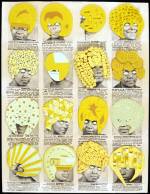 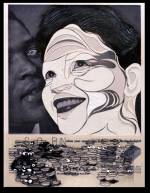