Katie Birkwood – interview: ‘The bodies of society’s disadvantaged, the poor and people of colour, were most likely to be used and abused without consent’

Katie Birkwood – interview: ‘The bodies of society’s disadvantaged, the poor and people of colour, were most likely to be used and abused without consent’

The Royal College of Physicians’ exhibition of anatomical illustrations, from medieval times to the present day, reveals the intersecting histories of medicine, art and politics, explains Under the Skin’s curator, Katie Birkwood

The Royal College of Physicians’ collection of 17th-century anatomical tables, preternatural road maps of the body, provided the stimulus for Under the Skin: Illustrating the Human Body, an exhibition of anatomical illustrations, stretching from the medieval period to the present day, which reveals the intersecting histories of medicine, art and politics. Hung along the upstairs gallery walls are human (and animal) remains, laid out and preserved on a series of wooden boards. Among them, scientists have been able to make out a male nervous system, maybe a placenta, and the venous system of an indeterminate quadruped, most likely a dog. “Though anatomical specimens not illustrations,” says Katie Birkwood, the exhibition’s curator and the RCP’s rare books and special collections librarian, “they blur the line between object and two-dimensional image,” introducing the technical considerations involved with recreating a body on a flat surface.

“The RCP has been collecting books, documents and objects since it was founded in 1518. Today, the historical collections include more than 20,000 rare books, including many illustrated manuscripts and documents, which form the backbone of Under the Skin,” she says.

The inclusion of works from Asia addresses the enduring Eurocentrism in science and art and also suggests the possibility of reading varying medical practices in non-European representations of the body. Visitors find an illustration from Tasrih-i Mansuri, a five-volume anatomical treatise written in 1386 by Persian physician and anatomist Mansur ibn Ilyas. Delicate, finely feathered, multicoloured lines delineate different branches of the nervous system – unusually, they extend beyond the figure’s skin, as if reaching to feel around, perhaps describing the metaphysical relationship between the body’s interior and the external world. Elsewhere, an Edo period Japanese scroll by Hozumi Koremasa, titled Shishi bessho zui, “shows diagrammatic representations of the internal organs, but emphasises not the relationship between one organ and another, but how the organs relate to the nervous system and, specifically, pressure points used in traditional treatments such as acupuncture,” says Berwyn Kinsey of Discover Medical London, an RCP partner organisation, which offers public information about the history of medicine.

Under the Skin plots a correlation between anatomical illustrations and methods of treatment and examination not only over different geographical regions, but also across history. Birkwood says: “A major shift in representation occurs in the 18th century. Up to that point, it was customary for bodies to be shown in landscapes or other artistically constructed backgrounds. Bodies are often depicted as if still living, and even taking part in their own dismemberment by lifting flaps of skin, or unveiling muscle – among the most famous examples in this genre in the exhibition are the illustrations from Andreas Vesalius’ 1543 classic, De humani corporis fabrica, which may have been drawn by Jan Stephen van Calcar, a pupil of Titian.”

As Birkwood remarks, the Enlightenment, the age of reason and empiricism, brings about changes in attitudes to the scientific image, and “the body starts to appear in a more clinical and detached setting, devoid of background, shadow and the presence of objects, often floating on a white page, far from indication of a previous life. The great 18th- and 19th-century anatomical atlases epitomise this approach, as seen in the exhibition in James Watt’s Anatomico-Chirurgical Views (1809) and the famous anatomy textbook by Henry Gray, with illustrations by Henry Vandyke Carter.”

“Though created with the aim of understanding the human body and its functions, the images in Under the Skin are undoubtedly also works of art in their own right,” insists Kinsey, stressing: “They were, in the main, created through collaboration between medical and artistic figures: with doctors, anatomists, artists, engravers and printers.” Birkwood also notes the artistry of scientific images: “They involve making deliberate decisions about content, composition and means of reproduction, never mind the high levels of technical skill required in the dissection, the drawing and preparing the blocks, plates or stones for printing.”

Anatomical illustrations, as the exhibition demonstrates, not only reveal the history of medical philosophy, says Kinsey, but also “reflect the prevailing visual metaphors and artistic preoccupations of their respective eras”. For instance, he says: “It’s impossible not to discern a lineage between the excoriated figure in Helkiah Crooke’s Somatographia Anthropine published in 1616 and icons of St Bartholomew, such as the famous sculpture at Milan Cathedral made by the sculptor Marco D’Agrate in 1562. In both, the figure almost glories in their flaying: St Bartholomew, a martyr for his faith; the cadaver, a sacrifice to science.”

The visual language of 18th-century France is discernibly more profane than sacred, Kinsey argues. “Jacques Fabien Gautier D’Agoty’s coloured mezzotint of a cranial dissection draws on the sexualised visual language of the final decades of the ancien régime. Figures are arranged in erotic poses reminiscent of the paintings of Jean Baptiste-Greuze or Jean Honoré Fragonard. They appear as though in a bed together, leaning in for passionate embrace. Only as the viewer focuses more intently does it become clear that the head of one character has been sliced open, the face of the other cut apart to expose the interior of the nose – perhaps a sly reference to the devastating physical effects of syphilis ravaging London and Paris at the time.”

During the 19th century, Kinsey continues: “As anatomical representation became increasingly systematised, and oriented towards the needs of medical professionals, images of the body counterintuitively became less recognisably human.” Jules Cloquet’s Manuel d’Anatomie of 1825 depicts a man’s alimentary canal, from jaw to gut separated from the remainder of his body and suspended in a blank void, presenting an “unsettling and desolate arrangement”, which, Kinsey contends, “prefigures the artistic dissection, isolation and reconfiguration of the human form in art movements from post-impressionism through cubism and beyond”. He remarks on the striking similarity between the screaming jaw and disembodied stomach in Cloquet’s work and Francis Bacon’s Three Studies for Figures at the Base of a Crucifixion (1944), adding: “Bacon is said to have become obsessed with depictions of screams following his purchase of an anatomical work on diseases of the mouth during a visit to the French capital in 1935 – it seems likely to have been Cloquet’s text, if not, a close relative.”

Images of the human form also tell us how societies are constructed, and who is excluded. “Anatomy is the practice of describing the perfect human body,” which means, Birkwood explains, certain types people, “those past typical reproductive age, people of colour and disabled people are for the most part absent from anatomical illustration and the exhibition”. 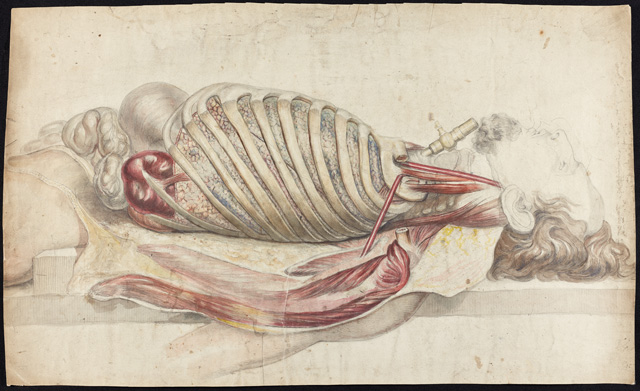 Women’s bodies have been particularly marginalised throughout medical history. “Cultural and long-standing scientific beliefs position the male form as the standard from which the female body is an inferior deviation,” Birkwood says. Also, “Women’s health, particularly pregnancy and childbirth, was rarely the preserve of the male medics who produced most of the published anatomical works until the advent of well-paid ‘man midwives’ in the 18th century, so the female reproductive system was much less well studied than the male. But female bodies were also harder to come by: in the UK, until the 19th century, the only legal source of bodies was after criminal executions, and the vast majority of those condemned to death were men.”

Concerns over the propriety of displaying explicit medical illustrations of women’s bodies have remained constant over the centuries, the exhibition demonstrates. As presented in its 1634 pocket edition form, when Crooke’s Mikrokosmographia was first printed in 1615, “the Royal College of Physicians (unsuccessfully) tried to ban its publications, or at least the chapter featuring depictions of the female reproduction system, deeming that the combination of the illustrations and text in English ran the risk of ‘corrupting’ the general populace,” notes Birkwood. Similarly, the much later 1948 American family guide to medicine and anatomy, Bodyscope, shows the female genitalia in its entirety, whereas the male’s is absent in one case and in another, covered by “a judiciously placed fig leaf”, Birkwood suggests, “preserving male modesty (or the morals of the imagined female reader)”.

Elsewhere in the show, a sonogram of a foetus at 20 weeks’ gestation (four weeks before the legal UK threshold for abortion) reminds viewers that anatomical images never simply record. Ultrasound, as Karen Barad argues in Meeting the Universe Halfway (2007), is an apparatus of disciplinary power, which orders and constrains bodies: it enforces cis as the norm from which all other genders deviate; also, in impoverished societies, where families can’t afford dependents and the workforce is heavily gendered, many “girled” foetuses are immediately aborted.

The exhibition’s understanding of the codependent relationship between representations of the body and real-world social oppression can be read through the Marxist theory of historical materialism. Marx argues that the material economic conditions produce social consciousness, the legal, political, religious, aesthetic and philosophical thought of a particular moment. As Under the Skin shows us, the history of illustrating bodies is the history of socio-economics.

Analysis of the legal concept of consent and the process by which the medical industry obtained cadavers for anatomy reveals a history of race and class persecution. In the face of institutionalised prejudice and the power of the medical establishment, pursuing scientific progress, Birkwood says: “The bodies of society’s disadvantaged, the poor and people of colour, were most likely to be used and abused without consent.” In the UK, she says: “Prior to the Anatomies Act of 1832, which gave people the right to refuse to be dissected, and families the right to claim bodies, medical schools were legally allowed to obtain cadavers for dissection from poorhouses, workhouses and hospitals. As mentioned, some were the corpses of executed criminals: dissection after death was for centuries considered part of the punishment. But even after the regulation of the act, the rules were often flouted. “Bodies were frequently obtained by the illegal means of ‘bodysnatching’: digging up corpses from cemeteries and graveyards.”

Unethical acquisition and use of cadavers extends to a shockingly recent past, Birkwood continues: “In 1951, cells taken from a tumour biopsy from a black woman called Henrietta Lacks were used in cancer research to develop an immortalised cell line, still used today. Neither Henrietta nor her family consented or were even aware of the use of her body until many years later.” Similarly, in the UK: “The Alder Hey organs scandal of the 1980s and 90s, where children’s organs were removed, retained and disposed of without parental consent, is still very raw in public memory.”

“Across the images in the exhibition,” the curator adds in closing, “as far as we know – whether their bodies were obtained lawfully or not – none of the subjects consented to be dissected after death and immortalised in anatomical illustrations.” Knowing this, the viewer can’t help but feel as if they are somehow stealing these bodies’ images – an uneasy reminder of the possible violence enacted on bodies through illustration.

• Under the Skin: Illustrating the Human Body is at the Royal College of Physicians, London, until 15 March 2019. It will reopen for a second run in October to the end of the year.