Body Worlds: Fascination Beneath the Surface

Body Worlds exhibits human corpses: skinned, gutted, flayed, peeled, shelled, filleted, opened up – dissected in every imaginable way. The cadavers are perfectly preserved by infusion with plastics and then posed in order to enlighten as science and elevate as art.

Professor Gunther von Hagens created the exhibition and invented plastination, the method by which water in body tissues is replaced first by acetone, then by a cocktail of plastics and rubbers. Human tissues are 70% water and only 30% solids, the result of the process is a preserved specimen the exact shape, size and colour of the original, but which should last indefinitely.

The exhibits are arranged to introduce viewers gently to the subject. Early display cases contain preserved organs, bones and joints and a skeleton hangs nearby. There are slices of bodies from different angles and – especially fascinating – dissections of limbs in which joints have been replaced with stainless steel, bones joined with plates and screws, and hearts cut open to reveal prosthetic valves. The most disgust I heard in the entire gallery was expressed over the side-by-side comparison of a smoker’s lungs with a non-smoker’s lungs, and an alcoholic’s liver with a normal liver – after those, even the most extraordinary divisions and arrangements of body parts seemed tasteful. 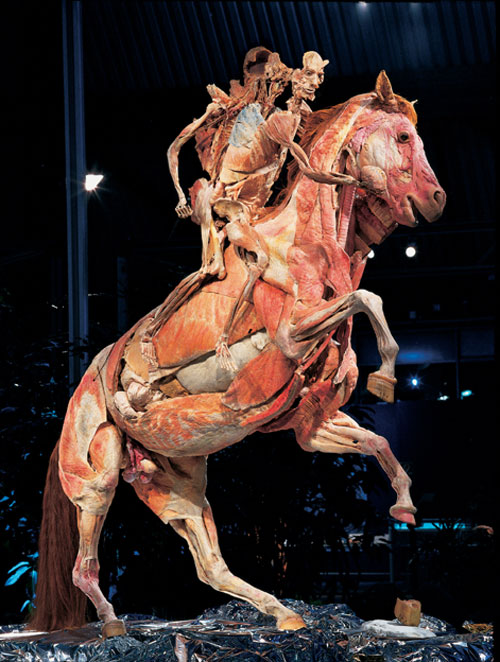 The first complete body dissections are fairly straightforward. A flayed cadaver (‘Whole Body Gestalt Plastinate with Skin’) stands holding his entire skin like a trophy. If we didn’t recognise it already, the catalogue reminds us of medieval and renaissance illustrations of similar poses. Further into the exhibition, dissections become more demonstrative of the relationship between organs, nerves, muscles, joints and greater freedom is taken to pose the bodies in striking and unsettling ways – sometimes in homage to familiar works of art – but always with a purpose, never purely to shock.

‘Muscleman with His Skeleton’ shows all the muscles of the body as though they had stepped out of their skeleton. ‘The Runner’ shows the same muscles, remaining attached but splayed and folded back to illustrate how each muscle is attached to the bones and joints. ‘Posed Specimen of the Nervous System’ shows how the brain and spinal cord send branches to every part of the body. ‘The Chess Player’ – which sits at a table and stares at a chessboard, has brain and spinal cord opened, with peripheral nerves dissected to show the route by which signals from the brain are transmitted to the hands. ‘The Organ Man’ has the skeleton and musculature divided vertically to demonstrate the arrangement of the internal organs. ‘Reclining Woman in the 8th Month of Pregnancy’, is, perhaps the most arresting. She lies in a classic pose of the artistic nude with womb opened to reveal an almost fully mature foetus; it could be tasteless and offensive, but in fact achieves a poignancy that is more than enough to justify the entire exhibition. 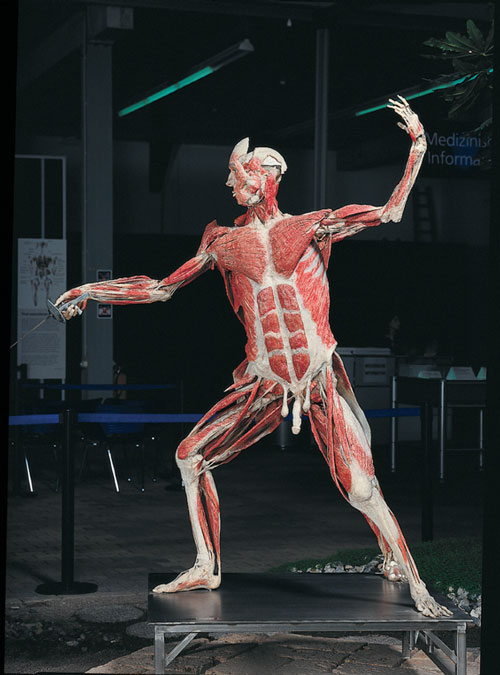 There is also a section that consists of preserved blood vessels – exposing a detailed architecture that is not only spectacularly beautiful, but confirms what we already know, that the most sensitive parts of our bodies are also the most bloody – the face, tongue, fingers and genitals.

As if to pre-empt inevitable complaints of new affronts to human dignity, the catalogue provides an outline of the history of anatomical studies, from Egyptian mummification, to Galen, Leonardo and Vesalius. We are reminded of the dissections for public amusement that took place in the 16th and 17th centuries, the subsequent forbidding of anatomical studies (von Hagens is rather too kind about the role of the church) and the ignoble history of grave robbings that were necessary for medical education up to the late 19th century.

At its inception, the exhibition was intended solely as an exercise in education about the human body. Von Hagens was surprised by both the immense public interest and by the controversy and the exhibition has evolved in response. The educational value of each dissection is clearly spelt out (in the case of the Audio Guide the spelling out is so detailed and lengthy I turned it off after the first few exhibits). The catalogue and all other materials emphasise the informed consent process for body donors, and the professor has put his body where his mouth is, by volunteering himself for the process after his death. However, a dissenting voice is included in the catalogue. Pastor Ulrich Fischer, a regional bishop of the German Lutheran Church provides a closely argued, but unconvincing, analysis of the ethics of human dissection and display. He starts with an indisputable fact – that von Hagens bears a remarkable resemblance to Joseph Beuys and plays it for all it’s worth by wearing a Fedora, seemingly at all times. Pastor Fischer concludes that von Hagens is a self-promoter, encourages voyeurism rather than education, and that the exhibition is a spectacle that devalues human life – a point of view not shared by the overwhelming number of entries in the comment book, or by any of the conversations overheard on the day I attended. 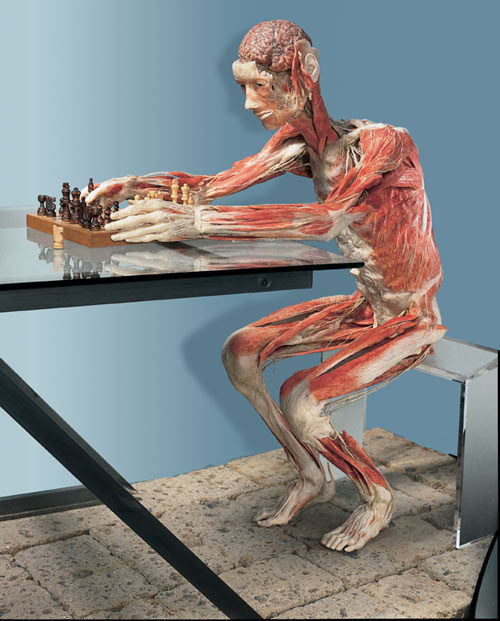 ‘The greatest revelation is the testicles’ one young man whispered to his girlfriend, as they stared at ‘The Swordsman’ – posed like a skinned D’Artagnan running his rapier through one of Cardinal Richelieu’s henchmen. From a distance, ‘The Swordsman’ is a unique anatomical curiosity – a man with three legs and three penises. Up close, the left leg is dissected in half to illustrate different muscle groups. The real surprise is that six-inch long, three-quarter inch thick, white structures anchor each testicle to the abdominal wall and hang between the legs on either side of the penis. The revelation was widely shared – ‘I thought they were just like two Crème Eggs rolling free in an ankle sock,’ said an older man.

For me, there were many revelations. My first six months at medical school were spent dissecting a cadaver that had spent months pickling in chemicals, hardening, shrivelling, turning grey and becoming almost unrecognisable as a human body. It was impossible to correlate the beautiful illustrations in my anatomy textbook with the disgusting mass I was slicing through. My skin and clothing were impregnated with formaldehyde, the unshakeable pungent whiff that is the mark of every first-year medical student. The man who donated his body to medical science would have been deeply disappointed at how little value he had been to me when I eventually began to cut open living people. Had he donated his body to Professor von Hagens, however, he could have made a real and lasting contribution to my understanding of anatomy.

The exhibition concludes with a demonstration of the plastination process and information on how to order chemical supplies and equipment – although this is not something one should attempt at home. Von Hagens techniques are now employed in 250 laboratories in 34 countries around the world, there is an International Society for Plastination, a journal and an annual conference. Although he does not (yet) accept private commissions for plastination of loved ones, in a possible glimpse of the future, he suggests that contemporary historical figures might be preserved (whole, rather than dissected) for display in mausoleums or crypts.

Von Hagens’ plastinations are not only perfectly, odourlessly, preserved but, more important, they are masterpieces of anatomical display. Those without a medical background may not fully appreciate the skill with which the dissections have been done. There may be criticism of von Hagens’ artistic pretentions, but there can be none of his attention to anatomical detail. Ivan Massow would have no cause for complaint; if there is an opposite of ‘craftless tat’ this is it.

For all the religious objections, tabloid hysteria, whispers of ‘Dr Mengele’, ‘repugnance’ and breaching of ‘taste and decency’, the ‘Body Worlds’ exhibition is a remarkably sober, intelligent and, even, enlightening affair.