There is always a danger in trying to deduce too much about an artist from his or her work alone. We are too quick to forget the performative aspect of art and the fact that artists, like actors, can present very different versions of themselves through their work. Very few expose their truth selves – warts and all. But perhaps we are safe in feeling that we know Rembrandt better than most: after all, he scrutinised himself with such unflinching honesty and with a regularity that has not been matched by another artist before or since. His self-portraits – he painted 40 and etched dozens more – display such insight, such emotional intelligence and humanity that we can read in them his flaws, his strengths and his anxieties.

In the first room of this exhibition, we are introduced to the man himself. Although the proportions of his face vary slightly over time – features shift, his nose widens and narrows, stretches and shortens – the eyes remain unmistakably those of Rembrandt. And it is in his late self-portraits, five of which are displayed here, that we see him laid bare, no longer a young man pulling faces in the mirror, but an old man, timeworn and introspective.

Perhaps the most moving self-portrait on display in this room, although they are all imbued with great pathos, is one he painted in 1669. Thought to be the last picture Rembrandt painted of himself, it represents a vulnerable man in the last year of his life. His face is pale and puffy and framed with plumes of grey hair, the paint thickly applied and textured like crumbling plaster. In areas, the brown, primed surface of the canvas remains bare, seemingly used as shorthand for the shadows and lines around his jowls and mouth. Quick and decisive sweeps of the brush pick out the bags under his eyes and notations of blood-red pigment mark out the rims of his upper eyelids. This is a tired man, a man who has been beset with financial difficulties for years, who has outlived his beloved common-law wife, Hendrickje Stoffels, and his only surviving son, Titus. This is a man whose best days are behind him. His gestural, hasty application of paint may be an indication that Rembrandt realised time was not on his side, but he hasn’t lost his keen eye or his sure hand. Despite everything, this is not a man who has given up.

It was Rembrandt’s determination to depict the ordinary and not edit out life’s unpleasantness that earned him criticism among his contemporaries, especially late in his career as tastes shifted towards the more polished, genteel influences that flooded in from France. But Rembrandt had never been interested in gaudiness or beauty for the sake of beauty, but rather the often ugly truth of things – a young women hanging from a gibbet, an unkempt field, a dissected corpse. The latter appears at the centre of The Anatomy Lesson of Dr Joan Deyman (1656), displayed in this exhibition in a room entitled Emulation.

Most of the original painting has been lost, damaged in a fire in the 18th century, but unusually for such a painting it is the corpse that dominates the group rather than the anatomist. Rembrandt seems to have taken a morbid fascination in rendering the hollow body, which lies dramatically foreshortened on the surgeon’s table with a gaping hole in the chest. The pallid figure, whose slimy pink brains are being meticulously examined by a pair of expert hands, extends right up to the picture plane, his dirty feet virtually pressed up to our noses. A man to the left holds the top of the deceased’s skull dispassionately, like a waiter presenting a bowl of soup.

As well as facing the cold hard facts of life – and indeed death – Rembrandt’s greatest innovation, especially towards the end of his career, lay in his ability to render inner lives and personal struggles on the faces of his models. Rembrandt was no saint when it came to the women in his life. He had his ex-lover, Geertje Dircx, committed to the Spinning House (a house of correction), for bringing a court case against him. But he was, nonetheless, extremely adept – perhaps ironically so – at conveying tragedy in women with a sensitivity and insight unparalleled by any other male painter. A room entitled Inner Conflict highlights one such painting, on loan from the Louvre. This is Bathsheba with King David’s Letter (1654).

The Old Testament tells of Bathsheba, the wife of the warrior Uriah, who catches the eye of King David. Having spied her naked at her bath, the king summons her to his palace with the sole intention of sleeping with her. Historically, depictions of Bathsheba include King David, or at least his messenger, alongside the bathing protagonist. But Rembrandt has decided to internalise the drama and limit the action to the impact of the king’s request, which is represented here by a crumpled letter. Having read its contents, Bathsheba sits naked and deep in thought, looking into empty space, her mind working through the moral dilemma before her. Can she remain loyal to her husband and disobey the king? Kings, after all, are not accustomed to being refused and the implications weigh heavy on her mind.

Bathsheba’s expression is complex. Her eyes are turned down, her eyebrows raised, as though she is recalling a simpler time. Her mouth almost forms a sad half-smile. Rembrandt used Hendrickje as a model, and that same year she was called before the Council of the Reformed Congregation to answer the charge of “practising whoredom with the painter Rembrandt”. Rembrandt didn’t turn up, leaving Hendrickje to face the charges alone.

The great triumph of Rembrandt: The Late Works lies in both exceptional loans secured from around the globe and thoughtful storytelling by curator Betsy Wieseman, who has chosen to avoid a chronological analysis of the artist’s later years. Instead, we are treated to a series of rooms that highlight the artistic struggles, innovations and preoccupations of Rembrandt in later life. This exhibition demonstrates that far from slowing in his old age, he was in fact as experimental and daring as ever, despite his financial and familial misfortunes. His technique continued to evolve; he applied paint directly to his canvases with a palette knife, scraped the impasto surface with the end of his brush and continually reworked his prints. All these things are discussed in the exhibition without distracting from the works themselves, and labels have been kept to a minimum in favour of a small booklet. Above all, this is a rare chance to see so many masterpieces in one place and thanks to some sympathetic curation you may just leave feeling like you know the master – and the man – a little better. 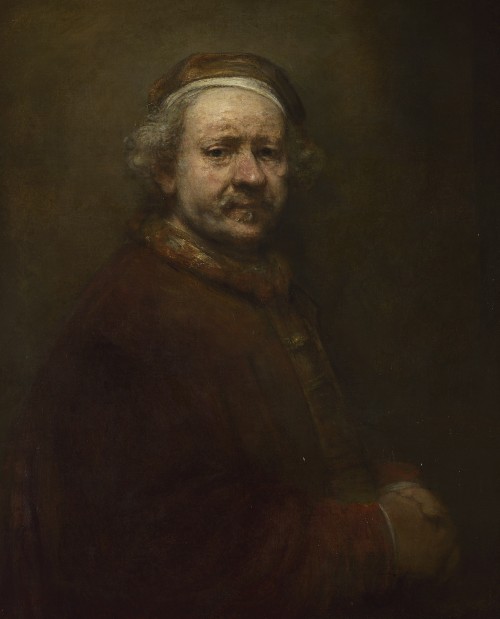