Jim Shaw: The End is Here

Jim Shaw: The End is Here

This first comprehensive retrospective of Jim Shaw to be held in New York, which includes his own work and his collection of modern-day Americana, verges between the deeply serious and the darkly comedic

The retrospective devoted to the Los Angeles-based artist Jim Shaw is the first comprehensive exhibition devoted to his work to be held in New York City. It explores his nearly 40-year career as an artist and an avid collector of modern-day Americana, from the vast number of paintings by amateur artists he has bought from thrift stores and junk sales to his archive of religious didactic materials. What emerges from this juxtaposition is a fascinating glimpse at what inspires Shaw as an artist whose work draws on historical research and introspective mining of his own memories and dreams, and more deeply what it means to be a collector who selects and preserves the stories and objects produced by others.

Born in 1952 in Midland, Michigan, Shaw earned a BFA at the University of Michigan, where he cofounded the short-lived punk band Destroy All Monsters with fellow Michigan-native artist Mike Kelley. After finishing his degree, Shaw moved to the West Coast to pursue his MFA at California Institute of the Arts in Los Angeles, where he has lived ever since. The exhibition at the New Museum covers the second, third and fourth floors, and the second floor includes some of his early airbrush drawings; large selections from his series Dream Drawings (1992-99) and Dream Objects (1994-present); as well as the sprawling My Mirage (1985-91).

Based on his experience growing up in the suburban Midwest, My Mirage tells the tale of an American boy named Billy, born into a prosperous middle-class, white family in postwar America, who enters a rebellious and sexually anxious adolescent phase that leads to experiments with mind-altering drugs. While deep in a hallucinogenic trance, Billy follows a woman he adores into a pagan cult, but is ultimately “saved” after he resurfaces as a born-again Christian. Depicted in a fragmentary, non-linear style across 170 interrelated drawings, paintings, sculptures, collages and videos, My Mirage references a wide range of graphic styles (the installation at the New Museum brings together 90 works from the series). In the section devoted to his childhood, we see a panel mimicking the classic Dick and Jane early readers and another based on a Bugs Bunny cartoon, while in the teenage years, Shaw borrows from late 60s and early 70s rock’n’roll posters and adopts hippie counter-culture aesthetics. My Mirage straddles the gap between pop art and surrealism in its knowing reference to popular culture and embrace of unlikely juxtapositions and dreamlike narrative, constructing a tale that is both comedic and at times caustically critical of American postwar experience and society.

The third floor of the New Museum is given over to the Shaw’s collection of religious didactic material and his collection of thrift-store paintings, which were first shown together in New York in 1991. Shaw acquires these objects with a hoarder’s obsession, and by showing these works, he hopes to both illuminate the influence behind his own practice and what he considers eccentric forms of creativity. Shaw began collecting thrift-store paintings, comic books, record covers, UFO magazines and obscure religious iconography while still living in Michigan and, although he does not consider his collections to be artworks in their own right, they reveal how acutely aware Shaw is of his own role as a consumer and as a curator, who preserves these purported lowbrow American cultural artefacts and then shapes the interpretation by displaying them within gallery and museum settings.

On the final floor at the New Museum is the immersive installation Labyrinth: I Dreamt I was Taller than Jonathan Borofsky (2009). Composed of 16 freestanding cutouts featuring references to Picasso’s Guernica, Salvador Dalí’s Soft Construction with Boiled Beans, as well as Borofsky’s public sculptures, the work alludes to numerous historical events of political catastrophe, such as the Spanish civil war and the Watergate scandal. Labyrinth intriguingly not only draws on the tradition of public murals and editorial cartooning – both a means to document and provoke reaction to political and historical events – but also as an installation built out of discrete parts, the work functions like a collage, building unlikely juxtapositions between visual material. Yet there is no Hegelian resolution between the different objects that jar and vie for our attention, we are simply left with the cacophony and tension.

Behind the installation are two banner paintings, The Moon and Judgment, which were created specifically for this exhibition and use old theatrical backdrops as their support. Shaw first began making murals from faded theatre backdrops in 2004, during George W Bush’s reelection campaign. He explains that he was drawn to these found scenes of Americana as fertile grounds on which to present his own commentary on current and past events.  In Judgment, silhouettes of Casper the Friendly Ghost and the peasant farmers from Jean-François Millet’s canvases rise from graves in the foreground, while diminutive spectres that recall hooded Klansmen or the tortured prisoners in Abu Ghraib lurk in the background. Although it is easy to recognise the individual characters, there is no clear message from the work as a whole, more an ominous reflection of our current social state. Across the exhibition, there is always a pull between the deeply serious and the darkly comedic, and one can find across Shaw’s oeuvre as many moments of clarity as of misinformation. 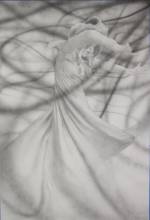 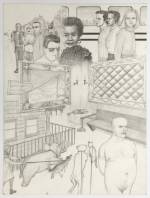 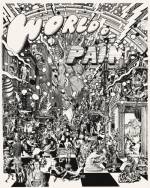 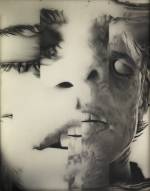 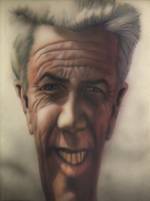 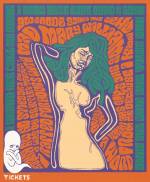 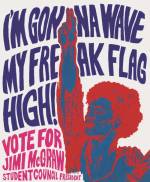 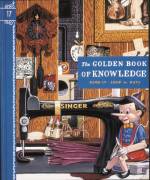 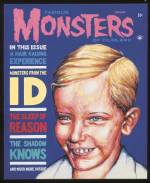