Down Among the Bowery Boys

Down among the Bowery boys

The New Museum of Contemporary Art (Lower East Side, Manhattan)

It is now three months since the New Museum of Contemporary Art (NMCA) in Manhattan's Lower East Side slid open its doors on 1 December 2007. This event, of some considerable relevance for the vitality of modern art in New York City, arguably exceeds in terms of historical significance the not so recent renewal and reopening of the famed (maybe now infamous) Museum of Modern Art (MOMA). Up there on West 53rd Street, nothing much stirred.

It has become inevitable that the ethos of the global marketing of art, the hedging and wealth diversification, and oligarchic accumulations by massively opulent collectors and trusts be brought to bear upon the rebranding of that institution, which has always been a key marker in the clarification, authentication and consolidation of the critical mass of 20th-century art. As recently as 2002, for example, MOMA was in its element, mounting a major international retrospective of the work over 40 years of the German painter Gerhard Richter; a global commemoration for an outstanding artist with little or nothing to link him with American culture.

Now, surfing across new tidal waves of a self-defining postmodernism, afterburning a massive drag created by all that historical baggage, MOMA must with its new mega structure reap ever increasing public approbation for what must still remain a traditional brand. Like Harrods or Bloomingdale’s it caters for a known public and any expansion of that preset roadmap for 'modern' art may in future prove more and more problematic. Risk and hedge are wayward companions.

No such historical constraints curtail the NMCA's own expansion. Down in the Bowery, the 2006 architectural short-listing of five relatively unknown - that is, non-signature - architect teams led to the decisive appointment of Japan's Sejima and Nishizawa, who had hitherto been noted for the design of the 21st-Century Museum of Contemporary Art for the small Prefecture of Japan's provincial city of Kanazawa. Here they raised eyebrows with a single-storey circular block within a centrally placed park, creating an activity node that refocused the actual city hub itself. This was a revisionary process for a whole city, which was what particularly appealed to the eager-eyed boys (and girls) from the Bowery. Indeed, they were taking a leaf out of the remit of Japan's Mori Gallery, masterminded lately by David Elliot (formerly of Oxford's MOMA); resolutely not to be drawn into building a permanent collection.

The founder of the New Museum, the late Marcia Tucker, knew from the start that contemporary art in the last quarter of the 20th century, anticipating also the 21st century, was best presented in non-rhetorical surroundings, such as lofts, warehouses and abandoned factory blocks. Pontus Hultén had already shown the way with the 'Temporary Contemporary' gallery in Los Angeles, which filled in while the city's own Museum of Contemporary Art was built.

The problem for Sejima and Nishizawa in the 21st century, was how to create ample enough new spatial opportunities in such a tight space as was on offer here in Manhattan's Lower East Side. A different design ethos came to be called for. The great flowering of new Japanese architectural talent of the 1980s (promoted by American and British commentators such as Kenneth Frampton) resulted in a particularly American construction dilemma. The perfectibility of Arata Isozaki's beautifully detailed, materially perfect MOCA in downtown Los Angeles (just as he was receiving the Pritzker Award there) nearly drove both contractors and architect up the wall as Isozaki struggled to complete his masterpiece. This was in contrast to the experience of the great Alvar Aalto in the early 1940s on the East coast, when local brickwork materials and skills were unable, at first, to replicate Aalto's deliberately rough-textured bricks - the brick technology in Cambridge, Massachusetts was just too far on. For this Massachusetts Institute of Technology student block, Aalto finally ran to ground an almost bankrupt brickworks. The rest is history.

However, in the West, 40 years later, it was the architect's (and Japanese) technical criteria that could not be matched. Half a century later, Sejima and Nishizawa leapfrogged that problem, bringing technology to bear with the idea of the metal double-skin membrane. But SANAA (as Sejima and Nishizawa had become known) already had one further American building to show. Their 'Glass Pavilion', at Ohio's Toledo Museum (2006) offered a hymn to pervasive transparency and at the same time provided a subtle parody of the High Modernist credo blazoned around West 57th Street. They had embraced the new technology, and its cost-benefits. Now the same Japanese sense of discretion has been applied to the block on the Bowery. The urgent prioritisation of natural lighting has clearly been a formative influence in composing the actual physical profile of the museum. Indeed, the five pronounced setbacks in elevation and section here facilitate this achievement poetically yet in utter harmony with the pre-existing visual street language of this stretch of the Bowery. The exterior cladding of the entire ensemble is achieved seemingly homogeneously by a two-ply combination of an outer metal skin, subtly perforated, backed up by an inner metal layer. This creates a diaphanous effect reflecting differing conditions of light and weather - ranging from a grey matt to white opalescent to shimmering silver plate.

Inside, the exhibition display areas run to one per floor, over floors two to four, with actual heights ranging between 18 and 24 feet. Floor areas range between three and five thousand square feet. Down at the entry lobby, there is an avoidance of the intimidating corporate 'power-dressing' to be found at MOMA. Instead there is a clear and lucid orientation for the visitor freely past the initial lobby and gift shop. Ironically, up on the seventh floor, where there is a relaxingly non-commercial yet intellectually stimulating venue, memories of the old MOMA members' lounge and dining room are reincarnated (for those old enough to recall). This wholly dispenses with the consumerist swathing of recent museum hospitality spaces and their 'club class' imperatives.

NMCA almost single-handedly now stands to set right the overtly corporate tower-cliché culture which has become late-Manhattan, as an ostensible New Yorker succession. From the now sadly devalued Ground Zero Patriot Games, to Renzo Piano's Times Tower, to Foster's Hearst Tower, the mammon message is today wholly uninspiring. The NMCA brings back to the city an architecture of innovation, now in full frame for a new generation of Cooper Union and Columbia architectural students. A priori, it offers a message of what liberated architecture can really be about. In the Bowery, it offers an international message of reconciliation that lifts Manhattan out from a recalcitrant provinciality. Yoshio Taniguchi may have his imposing mausoleum. And now, thanks to the foresight of the late Marcia Tucker, the Bowery can grab the future. 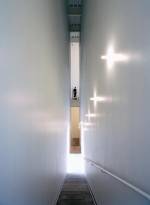