The first major exhibition in Britain of Cecily Brown was shown in Oxford and drew considerable media attention. British born, and daughter of art critic David Sylvester, Cecily Brown is a young star of the New York art world, where she has lived for ten years. Brown's work is also included in Part 2 of 'The Triumph of Painting' at the Saatchi Gallery, London. Brown's erotic, painterly work celebrates painting itself as an essentially sensual and physical process, and draws imagery from diverse sources, from the painting of de Kooning, Bacon and Guston, to pornographic magazines, comic books and Hollywood movies. More recently, Brown has drawn inspiration from Poussin, Tintoretto, Rubens, Goya and Hogarth. In her essay in the catalogue to accompany the exhibition, Suzanne Cotter asserts that Brown's target is 'the "quick fix" that characterises the way we respond to the barrage of images we are subject to in contemporary culture'.1 Painting as a means of expression has the physicality to imply poetry and dynamism in a way that images from mass media do not. The interesting way that Brown combines the painterly conviction and physicality of Guston or de Kooning with more brazen pornographic images results in her turbulent, arresting works. What might otherwise fall into the realm of cheap thrills is redeemed by fine draughtsmanship. The delicacy of the rendering of lovers embracing is in contrast to the sheer scale and physicality of these very large paintings:

Her paintings are about looking; looking to discern an image, a story, a narrative; but also looking as a form of voyeurism, transgression and violation and the mutual perversion this implies. Sex is the most obvious subject matter to tease the guilty viewer and … has provided a perfect subject for her early explorations into painterly narrative.2

In the place of human figures, Brown used 'images of fairytale rabbits engaged in orgiastic scenes surrounded by furry animal onlookers'.3 These combined aspects of scarier traditional children's stories and fairytales with the object of male fantasy - the Playboy bunny.

The paintings presented in her New York exhibition of 1998, 'High Society', saw the departure of the bunnies and the introduction of urgently copulating couples - body parts appeared flung about the large canvases. The realm of painting that presented large canvases with raunchy depictions of phallic symbols and genitalia has traditionally been a male preserve. For a young female artist to attempt the previously male imagery and on a vast scale has been viewed as a post-feminist statement. Cecily Brown explains the formal considerations of her transition from copulating bunnies to copulating humans:

I was using bunnies more or less as human surrogates. As they progressed they were becoming more and more human - especially the genitals - and I realised that I couldn't avoid the issue of painting the human figure any longer. While the bunnies had been in somewhat 'real' space, I needed a new way to emphasise the fact that this was an invented space. Obviously, the bunnies existed in a fantasy land - as soon as humans were involved, it seemed the only way to approach it was to start messing with scale and space much more. It wasn't so much the use of sexual imagery that created a release, it was the attempt to bend and twist pictorial space. I wanted to get the figure off the ground, as in the earth, and integrate it more with the flat ground of the picture. That was probably when I first started trying to use ambiguous space, one that defied gravity. I wanted it to be impossible for the viewer to know where they stood in relation to the action.4

Critics and scholars have traced Brown's boisterous, large canvases back to de Kooning and his mentor, Arshile Gorky. Gorky's work was described by Clement Greenberg: 'What is new about these paintings is the unproblematic voluptuousness with which they celebrate and display the process of painting for their own sake'.5 Brown, in fact, uses the sometimes cute imagery in a painterly drama to defuse the real violence of gang rape: 'They were quite nasty paintings, but I didn't want to be painting girls, I didn't want to see humans doing what the bunnies were doing'.6 The beguiling works, in fact, portray poignant messages about sex, power and violence that so intrigued Poussin, Rubens or David, who drew their imagery from the more sordid and violent aspects of classical myths or biblical stories. Brown responded enthusiastically to de Kooning's much quoted remark that 'flesh is the reason that oil paint was invented'.7 She also refers to the late 1940s as the richest in the 20th century, where representation and abstraction had a dramatic tension between them.

My male painter friends who are a bit older than me tell me I'm lucky. They say they spent their art school years trying to paint de Koonings, but that they could never get away with what I did. As white American males they couldn't paint like an abstract expressionist because it was too close, too recent, too American and too Macho, but as an English girl I could.8

Brown's works can be interpreted on a number of levels, and this they have been. Brown's sometimes off-hand, cavalier use of words contrast with her very articulate appraisal of issues, art history and her own exploration. The mystery of her works and the enigma of her as an individual make her, as numerous critics have observed, one of the most interesting artists working at present. 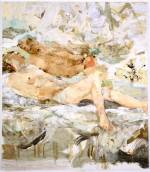 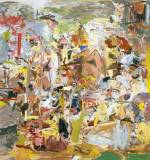