Shanghai is an international city known for its economic prowess and cosmopolitan culture. There is a euphoric sensation in the air. Nothing symbolizes better the lightning speed of development than the Maglev train, which plies the 30-kilometre stretch between Pudong and Shanghai International Airport in a mere eight minutes. Yet, for all the economic achievements, Shanghai is not well known as a centre for the arts. Nevertheless, various individuals and groups are trying to change the scene. The Zendai developer group has set up a Museum of Modern Art in their shopping mall development located in out-flung Pudong. Together with the Asia-Australian Art Centre in Sydney, Australia, they staged an international travelling exhibition there, entitled 'Asian Traffic', and subtitled 'Magnetism - Suspension'.

First shown in Sydney, the exhibition is scheduled to travel to Adelaide, Singapore, Beijing, Shanghai, Shenzhen, Hong Kong, Macau, Tokyo, the United States and Europe. This international touring programme will continue over a period of three years. Featuring 18 artists from Australia and other parts of Asia, this Shanghai exhibition featured a further five local artists in conversation with their foreign counterparts. 'Asian Traffic' seeks to act as a pivotal point to encourage exchanges and investigation in contemporary thinking within and beyond the Asia-Pacific region, in the process, delineating new trajectories in art. Likened to a traffic jam that is so prevalent in any Asian metropolis, where there is an unprecedented rate of information exchange amid an escalating clash of bodies in our contemporary world, this exhibition demonstrated the density and depth of contemporary art produced today.

The words 'magnetism' and 'suspension' encapsulate the current situation in Shanghai exceptionally well. 'Magnetism' in culture implies an irresistible pull of talents to a particular locality. It can also mean a united and integrated Asian perspective. 'Suspension' implies a certain levitation above the profane and mundane. It allows us to distance ourselves in order to feel the presence of Asian problems, as well as finding new ways to solve them. In the Asia-Pacific region, the phenomenon of diaspora cannot be ignored with extensive transnational migration. With this movement of people comes the cross-fertilization of ideas among various distinctive cultures through the process of absorption, reconfiguration, and redistribution of knowledge and technology.

Suzann Victor's installation piece, 'Expense of Spirit in a Waste of Shame', appropriated everyday objects such as light bulbs, mirrors and broken glass in a tense act of mechanistic onanism. The light bulbs flickered on while being lowered to make contact with the mirrors. But which 'infatuated' object is pleasuring which? The work raises questions that pertain to voyeurism, sexual prowess and the status of women in Asia.

Video has also been a popular medium of the artist in their investigations. Young Sydney-based artist, Owen Leong, engages issues of racial and gender identities through his video art work 'Second Skin'. It features a young man of Asian origin in a state of distress, with a gluey fluid trickling down his head. The 'self' is used as a metaphor here for the amplification of Asian identities, in a bid to transcend accepted norms and codes pertaining to race, gender and colour. It seeks to infuse images of Asian bodies with new meanings, in the process disrupting conventional hierarchical systems and evincing the invisible power of white hegemony. Leong's work instills spatial anxieties within a sparse interior environment, disarming the audience with a morbid, contorted sense of humour.

Indonesian performance artist, Arahmaiani, provides a social commentary of her native country through the video art work 'Human-Love' (2003). Showing an Asian man exhaling intermittently while being perpetually submerged in water, she explores interpretations of 'humanity' in her native society. Her work draws attention to the view that 'humanity' is an imported Western concept, which is supposed to empower all mankind with equal rights. Yet, when applied in a non-Western context, it tends to marginalize non-Western cultures by positioning it as 'the other'. 'Humanity' became a tool from the West to colonize and dominate economically, politically and even culturally, the 'primitive' neighbour. Water can give life and yet take life as well.

Chinese artist, Huang Kui, applied highly precise photographs of New York and Shanghai taken by satellites, onto a wall. He then traced the Chinese character 'Dao' (which means streets, roads or the way) in each city, in accordance with the city roads, thereby creating different 'Daos'. Huang's work is charged with a strong influence of Buddhism while he laments the constant addictive tussle between different superpower countries each vying for their own gains. To him, we are merely tiny microbes called mankind that have resided on this planet for only thousands of years. Where are we from? Where are we now? Where are we going?

'Asian Traffic' serves as a focal point for communication and investigations into Asia's conditions and problems. Notions of diaspora and the impact of globalization are reflected not only via the artists' works but also demonstrated through the curatorial concept and method of exhibition. Together, they seek to illustrate the diversity of contemporary Asian culture and thoughts that is in a constant state of evolution. 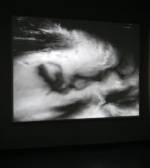 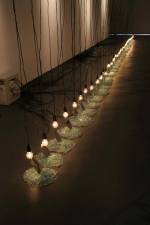