This is another exhibition about the city, but if you think that you will be stepping into a familiar exhibition space, think again. Once inside, you feel like Gulliver travelling in the land of Lilliput, with representations of city skyscrapers as tall as you are. The city itself has been brought into the 4.2 m high, 1,000 sq m1 exhibition space of the Shanghai Gallery of Art, as a 1:50 scale model.

Particleboards measuring 2.4 m high by 1.2 m wide are almost the sole material used in constructing the physical fabric of this model city. Some of the boards that are covered with 5 mm holes are used to erect 2 m high boxes of different shapes and forms, representing densely distributed, 100 m tall skyscrapers. Light rays spilling out from the drilled holes further render a pseudo-realistic image of an inhabited city. Peeping through the canyons between the model skyscrapers, the viewer catches a glimpse of the several overlaying and intersecting bridges in the 'city centre'. Signifying the multi-purpose transport interchange, the bridges cover lakes, farmland, illuminated roads and waterway networks. This 'Infra Jungle' is MVRDV's (Dutch architects Winy Maas, Jacob van Rijs and Nathalie de Vries) master plan for the central station area and new city development in Guangzhou, China. It creates a base for a highly accessible town of 8.9 km1 with one million inhabitants. This master plan model is a unique platform for MVRDV to stage their exhibition, but it can also be read as a symbolic representation of their visions for the future cityscape. Curated by Terrence Reily, Chief Curator of Architecture and Design at the Museum of Modern Art, New York, this exhibition also features MVRDV's five other smaller-scale projects in Liuzhou, Tianjin, Nanjing and Beijing, as part of the giant 'Infra Jungle' model. To position these projects in a global context, they are surrounded by a descriptive 'wallpaper' of 24 other projects by MVRDV that connects the Chinese model with the firm's wider agenda.

MVRDV have always considered architecture and urbanism as something holistic. By negotiating the relationship between individual projects and urban planning, they tackle the issue of the density of future cities without losing sight of local cultural demands. Lamenting the overemphasis on speed and quantity in the development of new cityscapes, especially in Chinese cities, they wonder if there is another model for this urban process:

What is the answer for the overwhelming process of space consumption? What capa-city can 'swallow' this matter, turning it into more compact environments, ones that would enrich this matter with a more 'urban', cultural potential? Can these new cities avoid enormous areas to be colonised and yet leave them for the purposes of agriculture and natural reserve? Can we then enforce densities, that in the end would increase the potential for a country if not the world altogether? ... What form of urbanism will then appear? Can we develop an urbanism that enters the third dimension in a time where urbanism is still dominated by 'zoning', a two-dimensional approach in itself? Can we propose a city that would literally create more public levels that are viable for enlarging urban capacities? Ones that can 'absorb' (entertain) different programs endlessly, and with space for limitless capacities, populations, and possibilities. Beyond scarcity. Beyond separation. Beyond pessimism and protectionism. A city that stretches not only in the front as well as in the back or left and right, but swells above and below. Pure depth. The 3D City.2

The Italian Renaissance architect, Leon Battista Alberti, held the view that everything that was ideal was ideal in all its parts. According to his logic, an ideally conceived city would be constituted of ideal architecture, each detail of which would, in turn, be recognisable as an ideal fragment.2 This ideal world has come under increasing pressure since the Industrial Revolution, when urbanism has been left to its own self-realisation. To date, the tables have not yet been turned. How architecture could constitute something larger than itself is yet unclear, but MVRDV's projects beg to differ. By accepting the whole reality of the contemporary city, they validate the fundamental elements of contemporary life: production, consumption, mobility and materialism. Adopting a critical position and harbouring a relentless interest in the environment and sustainability, their works are based on a new relationship between architecture and urbanism. Contrary to Alberti's vision of creating an ideal city by assembling ideal fragments, their works evolve from a larger vision of the city. They seek to make the city not ideal, but coherent and legible, by giving form to forces that shape the city and letting the architecture develop as an element of the greater vision.

Even as a recognised avant-garde design group in the architecture arena, MVRDV's visualisation and proposal for the 'sky-city' still has its limitations. However, their critical attitude and unrestrained thinking method, their ability to conceptualise laterally and their persistence in getting to the core of the problem, are perhaps the greatest enlightenment that one can get from this exhibition. It is a freefall in endless space.2 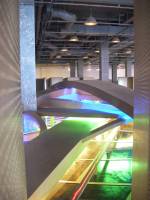 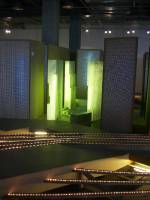