The work of Chinese artist Guan Wei is an important comment on contemporary global culture. Born in Beijing, China in 1957 Guan Wei travelled to Australia in 1989, just three years after graduating from the Department of Fine Arts at Beijing Capital University, to take up an artist-in-residence at the Tasmanian School of Art. He was invited to undertake two further residencies there: one at the Museum of Contemporary Art in Sydney (1992), the other at the Canberra School of Art, Australian National University (1993). Becoming an Australian citizen enabled him to apply for travel grants and residencies abroad, notably the Australia Council’s grant for the Greene Street, New York studio in 2003, and the Cité International des Art Paris in 2007 and Fellowship in 2008–2009. He has exhibited widely (45 solo exhibitions and 65 group shows), including Face Up in Berlin 2004 (reviewed on this website). Guan Wei’s solo exhibition at Shui Mu Art Centre 798 Art Village presents 30 years of his artwork (painting, sculptures, installations) from 1978 to the present. Included are the works created in China from 1978 to 1989, from his 20-year stay in Australia from 1990 to 2008, and most recently since he moved back to Beijing in 2008. For the Shanghai Biennale (2010–2011) he has produced the installation work, Development Zone.

In 2003, Face Up,1 Berlin enabled a European audience to view his challenging works. The series Trepidation Continent (2003) presented military style maps of Australia with arrows to denote military advances. There is the full wartime kit: helicopters, tanks, fighter aircraft, soldiers in action. They constituted a political comment on Australia’s recent hostile and contradictory attitudes to immigration, which have international applications. An artist of our time Guan Wei, “does not seek to educate in a didactic manner, but uses humour and an economy of painterly means to help us see more clearly the folly of our ways and the importance of our common humanity”.2

Guan Wei’s work presents an image of personal and psychological battle; the military maps are also weather maps with high- and low-pressure systems, Aboriginal hunters and native animals, which make reference to historic conflict between white settlers and the Indigenous population. Although Australia fought in the two World Wars and in Vietnam in the face of great protest, no war has been fought on Australian soil. Rather than the politically correct image of Australia as the large, vigorous, multicultural country presented to the world, this is a perception of immigrants who have in fact experienced blatant hostility on arrival. Chinese woodblocks represent the artist’s culture and identity; boat people from Asia are greeted with “Piss Off!” and “Not Welcome!” stamped alongside signs of bureaucracy “Secret document”, “Urgent”, “Confidential”. The applications create a menacing image of Australia, traditionally associated with promise and prosperity. Multiculturalism and its legacy of tolerance have in recent years been compromised. Trepidation Continent seeks to convey, “the general global disquiet of the past several years …[the] unease over migration and an accompanying suspicion of outsiders”.3

Guan Wei’s work in Australia is exemplified by the remarkable project commissioned by the Powerhouse Museum, Sydney (2008): Other Histories, Guan Wei’s Fable for a Contemporary World.  The project is the artist’s own version of Chinese history and Chinese-Australian history, “a gesture of utopianism that allows him to select his own past in reaction to a conflicted present”.4 Other Histories “was based on an imaginary history and the idea of a Ming dynasty admiral’s epic voyages in the early 15th century”.5 The exhibition, Guan Wei hoped, would function as a “floating corridor in which history and memory, fact and fiction are blurred”.6 He also wanted to, “re-examine the function of a museum; break down the barriers of museum exhibitions; re-interpret the museum’s collection; and question mainstream theory about the history of Australia”.7

Comic book style cartoons are also incorporated in to the imagery in many of the works, giving a billboard character; the absorption of mass media techniques of the Western world with the patterning from the Chinese decorative arts. The juxtaposition of Chinese dragons, Australian emus and kangaroos create a world that is at once diagrammatic and evocative of the mystery of folklore or children’s literature. The messages are, however, profound, the finish and majestic scale of the works, exemplary. Installation pieces are combined with works in the museum, a model of Captain Cook’s HM Endeavour, for example, against a map of Australia’s closest Asian neighbours. The political issues and search for identity that Guan Wei sought to address; the maps represent journeys of the mind as well as the physical migration of post Tiananmen Square (1989) Beijing. Guan Wei assumed the role of director, orchestrating different parts of his team, remaining in control of the drawn images within the overall design.

For this year’s Shanghai Biennale Guan Wei has produced the installation Development Zone, which evolved from his 2002 exhibition New Development Zone. Addressing issues arising from economic globalization, Guan Wei identifies the inevitable damage to the environment and cultural homogeneity. He explains:

As city perimeters swell to accommodate increases in the population, land that was once allocated for farming and recreation is reclaimed by the expanding city. This sort of rapid expansion exerts pressure on the city’s resources and inevitably results in an increase in pollution and, ultimately, the environmental balance is destroyed.

Accompanying this first set of issues, a second set (of equal significance) emerges; the levelling of cultural differences that results when traditional cultures, ethnic minorities and aboriginal cultures and dominated and deprived-financially, culturally and environmentally – by the forces of the world marketplace, as exemplified by companies such as McDonald’s and entities such as Hollywood and the Internet.8

He explains the manner in which the installation, based on the painting, New Development Zone (2002) came into being: “I used one horizontal Chinese scroll from the Song dynasty painter Wang Ximeng’s The Grand Territory print, and four vertical Chinese scroll: spring, summer, autumn and winter. I draw towns, banks, theatres, university, office buildings and many other buildings with the architectural drawing method on Wang Ximeng’s The Grand Territory, print. The four vertical Chinese scroll painting: spring, summer, autumn and winter, respectively, transformed into a weather map, seismic test pattern, test pattern and waterlines pollution map. In this installation of Development Zone, I did a mural as the background for the four vertical scrolls. The background mural painting is based on my inspection of the Yangtze River Delta region developments. I created a ‘map’ of this area’s developments for this installation.”9

Another series work Mapocalypse (the map of Apocalypse), made in 1997, which consists of 20 pictures on the file-papers, was also used in Development Zone.

I adopt a new medium – the drab office filing folders. They are made of recycled “useless” materials and yet contain enormous information relating to all kinds of files and documents. I elaborate on their character and “publicize” a cabinet of newly discovered “secret files”, in which unrestricted human destruction and wastes of natural resources are recorded. I attempt to inscribe the warming and punishment from nature. By utilizing such “recycled” materials and turning wastes into treasure, I attempt to address the issues of ecological balance. This work also emphasizes the use of waste materials and renewable principle and the theme of the performance and problems caused by urban development and how to solve these problems, such as environmental destruction, water pollution, the greenhouse effect and so on.10

Specimens collected in the region such as: plants and animals, building materials, soil, rocks, water, are presented in the exhibition space to prompt the viewer to confront the issues central to city developments on such an unprecedented scale as that of modern China. The artist explains the significance of the installation, which itself, is an amalgamation of previous works and ideas in his art practice. For Guan Wei, fusion and collision exist on three levels:

Firstly, the interaction between eastern and western cultures; the mapping of modern buildings over the facsimile (a symbol of eastern culture) is a metaphor for the creeping dominance of modern Western culture. Yet, this sort of interaction can also give rise to new and interesting possibilities. The second collision is the combination of the modern and the ancient, raising questions about how to view the traditional culture and, and in turn how the traditional culture can provide solutions for overcoming difficult modern predicaments? The third and final combination is that of art and science, as the visual language of the traditional scroll is transformed by the modern scientific notations added to the scroll’s surface, it references scientific advances as they influence the human condition and become an integral part of modern existence.11

In the Beijing retrospective, Guan Wei exhibits five small sculptures of clouds. He has long used perfectly rendered clouds in his painting as “very personal visual symbols”. Clouds represent leisure and ease of movement; they are essentially optimistic: “Freedom, like a cloud habitat in the mountains, sea, ground and wind there, clouds on the move to where there is no resistance, nor a struggle – quiet, nothing to achieve, and nothing to lose except to enjoy the presence of inaction, to celebrate the joy of the moment.”12

Li Ao, a philosopher of the Tang Dynasty, admired the eminent Zen-Master Yao Shan for a long time, paying him a visit in the mountains for the meaning of TAO. Master Yaoshan pointed a finger upwards then downwards, and asked: “Got it?” While the Philosopher was totally confused, the Zen Master continued: “Cloud in the sky and water in the bottle.” Cheerily Li Ao agreed with the epiphany.

While the cloud is high and far away, and the water shallow and near, the TAO exists among the nature’s breathing. While few people could catch insight of the TAO-Cultivating and Tao-Seeing, probably not many people could regard the art as Tao-Practicing as Guan Wei does. In Guan Wei’s works, the gorgeousness of art and the silence of Tao-Practicing have achieved a wonderful combination.

Seeing Guan Wei’s works, you might be enchanted right away by the structure and conception. They are huge but delicately painted, reserving the fresco colour. They are brilliant and full of life, instantly resuscitating our imagination.13

As a Chinese artist who has absorbed western ideas and methods from living and travelling in Australia, Europe and the US, Guan Wei’s messages are global in their application. Harmony, tolerance and respect for others and the environment are values of universal import in the early 21st century. The unassuming and witty images and playful language enable his political perspicacity to be accepted and a way forward navigated. As an artist he has the rare gift to highlight problems, defuse conflict and live fully. 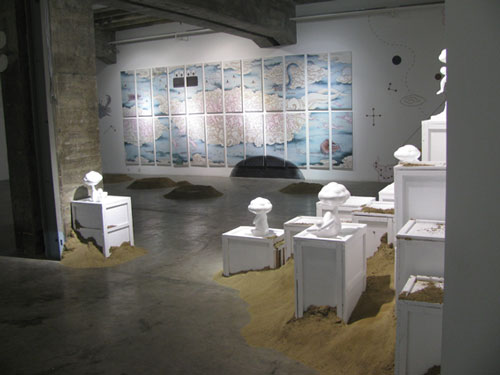 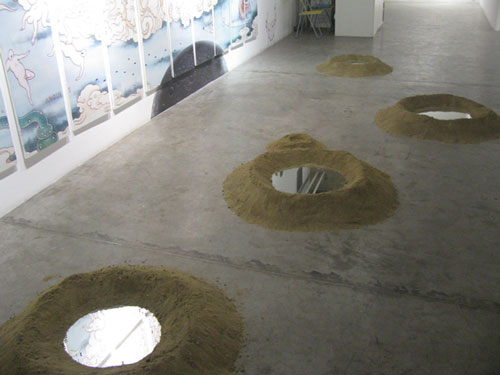 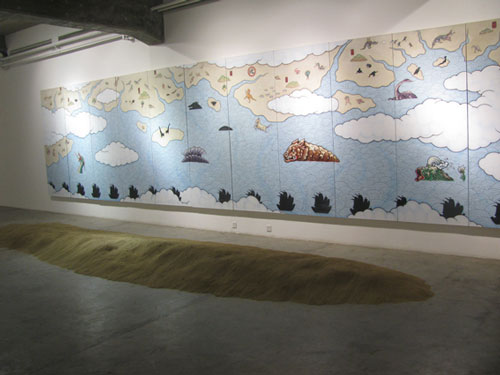 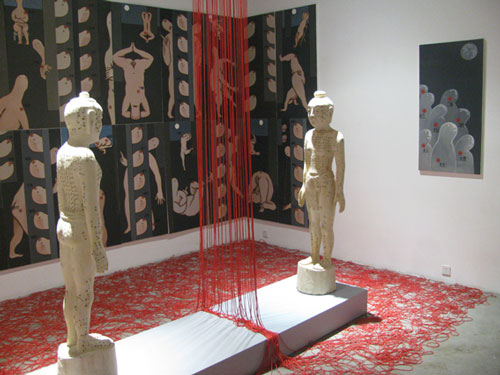 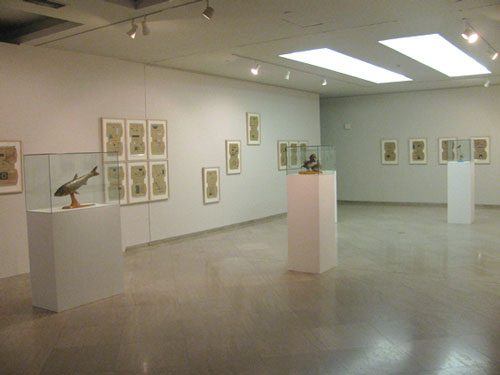