For the second exhibition at his gallery in Vauxhall, Damien Hirst presents more than 30 works by Koons, some of which have never before been shown in the UK 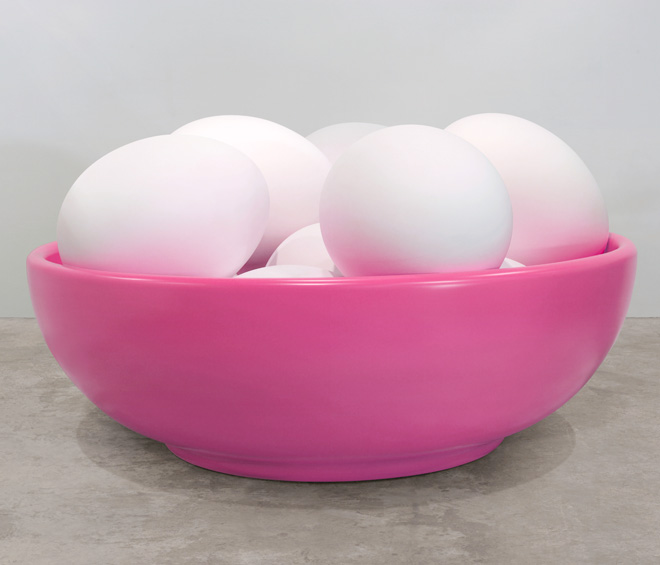 In this, his second exhibition at Newport Street Gallery in Vauxhall, London, Damien Hirst presents a solo exhibition of works by Jeff Koons (b1955). With more than 30 works from Hirst’s collection, some of which have never been shown in the UK, the exhibition covers a range of the major series that have conveniently structured Koons’s career, dating from 1979 to 2014 and making up a neat, albeit condensed, survey of his work.

Koons’s work is the contemporary art equivalent of candyfloss, or blue Slush Puppie; assaulting the visual stimuli and so sweet that it tastes sour. The first room of the exhibition eases the viewer into the experience with some seminal readymades (the readymade is really where Koons’s work begins), opening with one of his earliest works, Inflatable Flowers (Short White, Tall Purple) (1979), a couple of cute blow-up flowers perching on two mirrored tiles on the floor, from the Inflatablesseries. These vinyl plastic toys, sourced cheaply from minimarkets and dollar stores would later open up a whole new set of experiments with surface and material for Koons.

Other readymades in this first room include works from The New series (1980-83), Hoovers bought and kept in pristine condition in plastic display cases, like collectors’ items, or props from American Psycho – the film being rather apt, as it was in 1979 that Koons started working on Wall Street as a commodities broker. The Hoovers are arranged with a neon sign shouting “The New” in red letters, arranged in the same formation as the street-facing window display at the New Museum in 1980 during his solo exhibition there.

On the walls, posters from the Luxury and Degradation series show glossy advertisements for alcohol and cars; Find a Quiet Table (1986) is a reproduction of an ad for the liqueur Frangelico, showing a close-up of the glistening, brown, flowing liquid. Through reproduction of the posters in the setting of the gallery, Koons makes us look twice at the seductive, slick vocabulary of the imagery in a critical way that isn’t possible during the daily commute through life where advertisements have a way of osmosing into our brains without us being aware. Consumerism, be it branding and commerce, or the less conceptual space of the art market, is never far away in a conversation about Koons.

Koons is well known for being one of the most expensive contemporary artists, if not the most expensive. His Balloon Dog (Orange) sold for a record-breaking $58.4m in 2013, which has not yet been topped by a living artist. His Balloon Monkey (Blue) (2006-13) (another animal, another colour, same concept, from the Inflatables series) has its own room in the exhibition, a double-levelled space that feels almost as if the gallery had been custom built for it, fitting in perfectly like one of the Hoovers inside its plastic packaging.

While visiting, a father and daughter kneel down close to the edge of the sculpture, taking selfies in the reflection. She squeals with delight as their faces are stretched and obscured in the shiny, curved surface of the mirror-polished stainless steel with transparent colour coating. A gallery attendant hovers close by. As well as very expensive, bold, colourful and fun, the sculpture is also very adult; the phallic tail of the monkey curves brazenly upwards into air, treading an uneasy line between innocence and awareness.

Upstairs, a whisky decanter in the shape of a train is cast in stainless steel, the only material to preserve alcohol indefinitely. The collectors’ item, which holds 75cl of whisky in each carriage, is titled, Jim Beam – JB Turner Train (1986) and is part of the Luxury and Degradation series. Several other cast stainless steel models, including Italian Woman (1986) and Kiepenkerl (1987), show the beginning of Koons’s interest in progressing the readymade, experimenting with scale and material.

Koons’s deepening fascination with the properties of different materials began to challenge the pure forms of the readymade used in the earlier series. For Three Ball 50/50 Tank (Spalding Dr J Silver Series), part of the Equilibrium series, he sought the advice of Nobel prize-winning physicist Richard P Feynman, who developed a liquid solution of sodium and water that would float a basketball centrally in a tank. The piece requires a climate-controlled environment and must be continually adjusted to assure equilibrium is maintained.

Infamous heavy-hitters from the Popeye and Celebration series show the high point of Koons’s obsession with surface, where materials and techniques were used to scientific degrees of precision to create readymades that were actually illusions. The aluminium inflatables are flawless; part of the Popeye series, Acrobat (2003-9), a lobster balancing on an upturned bin and the back of a chair, looks as light as a blow-up toy. Money, effort and lengthy amounts of time have been required for works in the Popeye and Celebration series in order to create the appearance of a real readymade.

Play-Doh (1994-2014), from the Celebration series, is not only impressive in scale, but also in technique. Koons experimented for several years, trying to find the right material and technique in which to create the best scalable replica of a mound of Play-Doh. The colours are a reflection of the “Play-Doh palette” from 1994, recognising the year that it was initiated – it took 20 years to complete. He settled on an aluminium cast, using the lost wax process to a precision and scale that had not yet been achieved with the technique, showing his ability to persevere to create the exact effect intended, and consequently breaking the limits of what was thought to be achievable with the materials and techniques used. The arrangement of the 27 pieces relies only on weight and gravity, and requires careful installation, with each piece being lowered on the other from above. Leaning close to the Play-Doh, you can almost taste the salty smell of the soft, warm substance.

Koons has developed a complex conversation through his body of work, stirring together ideas and themes into a thick, pale-yellow cake mixture. The crossovers between themes, and the development of technique and material, show Koons’s series as an evolving web of discussions around consumerism, beauty, life, money and society.

While Koons may have an annoyingly prosaic love of the art game, an unhealthy obsession with surface, and an unnerving ability to intensify the everyday with the help of Nobel prize-winners and studios of professional technicians, his success is a reflection of the society we live in today, bouncing back off the shiny surface of a blow-up dolphin. Don’t hate the player – hate the game. 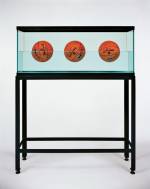