The Royal Academy is currently thronged with jostling human bodies and body parts. These are not, however, composed of the flesh and blood of the great art going public, but are inanimate bits and figures, all in the name of Auguste Rodin, the great French sculptor, who died in 1917.

We cannot cease to be reminded of Rodin, because he seemed to provide the jumping-off point for so many of the leading artists of the remainder of the 20th century. Matisse, for example, had a supposedly formative meeting with Rodin in 1900, in his studio. At that juncture, Rodin's reputation was long formed as the great individual who had given new life to an art form that had actually atrophied. Matisse's curiosity related chiefly to Rodin's sculptural method and practice as such, and less so in terms of his drawing technique. So Matisse's contemporary figure sculpture 'The Serf' (1900-03) was doubtless executed under the particular influence of Rodin, yet it also epitomises Matisse's own determined breach from any attempt to emulate Rodin's practice. While Matisse therefore seemed ultimately to dismiss Rodin's method of disjunctive application of 'bit parts' in his work, Brancusi, who served only a four-week stint in Rodin's studio as one of over 40 at work there, came to accept Rodin's 'cut and paste' practice, the moving and detaching of fragments large and small for the greater good of any particular sculpture in priority over the others. But for Brancusi, such proximity to this gigantic reputation was too close for comfort - he left after four weeks, having absorbed the message.

The exhibition at the Royal Academy, which has just opened, has caught the notorious congestion of the Rodin Museum in Paris, and yet in the aggrandisement and monumentalisation of the figures that are, so to say, whole entities, something of the immediacy of the Rodin Museum is inevitably lost here. The figures themselves are invariably distorted (with the exception of the early work), exaggerated in the awkwardness of their poses. This fragmentation on a massive scale is not alleviated but increased by the wealth of documentation provided: period photographs, images of the great man at work and prints of some of the great 'stuffed-shirt' commemorative banquets laid on in England and France, all go to emphasise the gravitas and greatness of France's pre-eminent sculptor. The ambivalent photographic array of female images, ranging from erotic sepia nudes, from humble but flirtatiously provocative models to taunting, flattering well-corseted grandes dames is, one might say, a useful adjunct to the show. From the sublime (Gwen John in the nude) to the ridiculous (George Bernard Shaw posing nude as 'the Thinker') there is a full exposé.

Is Rodin overwhelming? Or to today's distinctly jaundiced eye - from that of Tracey Emin to Damien Hirst - somewhat underwhelming in the final analysis? Was it all too much? In the show, the total accumulation of 'bits and pieces' somehow diminishes the masterworks. For the 21st century, too, the longer-term critical fallout might seem to be distinctly over extended. The great masters of the 20th century, such as Brancusi, but also Moore, certainly seem to owe less and less to Rodin, except to have escaped to work another day, another mode. Rodin was the master of 'recombinant' sculpture. In connecting and reconnecting different human part sculptures, within reach of his studio, like some atavistic archaeologist, moving from work on one half-finished sculpture to another and back again, Rodin established a fundamental working process for the benefit of all sculptors of the 20th century and beyond. Recombinant - the ability to combine and recombine divergent yet selected elements all the time in an ongoing process - that was Rodin's great innovation. It could be said that Henry Moore, Antony Caro, Bill Tucker, even Alberto Giacometti and Eduardo Paolozzi and not least Antony Gormley, all gained from this process as legitimised by Rodin, to a greater or lesser degree - and it percolated through the schools of sculpture and through the generations. Then each and all got the hell out of it: Rodin was too all embracing, as the multitalented Michael Ayrton was sadly to discover.

Rodin's Balzac must, however, remain one of the great individual 20th century monuments. Likewise, the remarkable group sculpture, 'The Burghers of Calais', stands today as a triumph of figurative art. Here, one is reminded directly of Rodin's very early bronze figure entitled 'The Age of Bronze' (1877). As time went on Rodin became increasingly preoccupied by female models, whom he could draw without ever dropping his penetrating gaze from their beguiling forms. It is ironic, therefore, that Rodin gave street credibility to the plagiarising and appropriation of form taken from the work of other artists, or ancient precedents. Rodin's 'borrowings' seem to be little disguised, and so readily identifiable for the most part. And so perhaps this among other skills is what makes Rodin, essentially 'recombinant' sculptor as he was, a precursor to 21st century art. 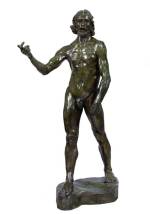 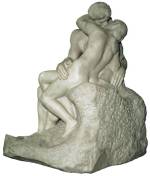 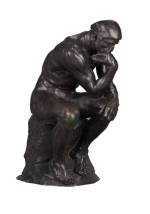