It begins with a car crash. Racing through the night, the vehicle swerves, overturning in a crash of metal and mud, and out of the mangled wreck, FT Marinetti arises to proclaim the tenets of the Futurism Manifesto.

This violent force of immense dynamism, speed and, perhaps, overzealous machismo encapsulates the mystique of Futurism as we usually understand it – a flash-in-the-pan moment, a movement of incredible and even naive energy, whose bellicose fever was tempered by the first world war, which brought along with its destruction the death of Umberto Boccioni and Antonio Sant’Elia, key members of the group. Most previous exhibition have focused on the movement’s “heroic period”, which lasted from 1909 to 1916, but in the current show at the Guggenheim, Italian Futurism is rescued from the confines imposed on it by historicism, revealing a complex and often contradictory group that produced work well into the 40s.

The exhibition begins with sculptures such as Development of a Bottle in Space (1912) and Unique Forms of Continuity in Space (1913) and their accompanying drawings by Boccioni, while an aggressive male voice reads out the first Futurism Manifesto, published in Le Figaro in 1909. Organised chronologically, the show takes Futurism through three different aesthetic phases, roughly aligning with the first decades of the 20th century, from the fractured spaces of the 10s to the mechanical forms of the 20s and the softer, aerial forms of the 30s.

The usual cast of characters make an appearance in the first sections devoted to the “heroic” years: Boccioni’s The City Rises (1910–11), Gino Severini’s Blue Dancer (1912) and Carlo Carrà’s Funeral of the Anarchist Galli (1910-11) capture the frenetic movement of contemporary life from physical labour to the glitter and decadence of a can-can dancer and the mounting political unrest. While the Futurists vocally celebrated the machine, they generally shied away from new mechanical media, however, their rare early forays with photography provide intriguing perspectives. The influence of the scientific documentation of movement in the photographs of Étienne-Jules Marey and the ghostly long exposures of Anton Giulio Bragaglia are wonderfully juxtaposed with Giacomo Balla’s painting The Hand of the Violinist (The Rhythm of the Bow) (1912), giving neat visual evidence of the influence of these experiments on Balla’s evocation of movement.

Futurism was initially a literary movement, a facet that can be hard to convey in an exhibition, partially because of the language barrier for many viewers and the fact that much of the poetic experimentation incorporates phonetic reconstructions and plays on pronunciation that can be conveyed only through live performance: Marinetti’s Zang Tumb Tuuum (1914) has the “modest” ambition of destroying all existing literary conventions in order to give birth to a style more commensurate with the times, for example. The exhibition does succeed in incorporating the profusion of poetry, manifestos and artist books that the Futurist’s produced, and well-incorporated digital elements allow for these to be explored more fully, with tools to scroll through a number of selected volumes, exposing experiments in typography and book design. The use of unconventional materials, such as tin for the leaves of Futurist Olfactory Tactile-Thermal Words-in-Freedom (1932)and The Lyrical Watermelon (Long Passionate Poem) (1934), and large metal bolts for the binding of Futurist Depero (1927), are just three examples of the wonderfully surprising objects on display.

From its beginnings as a literary movement, Futurism quickly expanded to include works in architecture, music and even cuisine. Several histories have credited the movement with the birth of contemporary Performance art, and their early “serate” variety nights – a mix of poetry readings, music and brash vaudeville – are evoked in a short video montage, while their larger theatrical works for “ballets”, such as Balli Plastici (1918), are represented by Fortunato Depero’s designs and marionettes and Balla’s detailed notations for the lighting design for Igor Stravinsky’s Fireworks (realised in 1917).

The first world war changed Futurism; it lost members to the trenches while new figures such as Depero (who features prominently in the current show) brought an infusion of youth. The nascent connection between Futurism and the burgeoning Fascist movement was another product of this period. The idea that major works of modernism might somehow be considered symptomatic of the history of fascism, broadly conceived is rarely countenanced, but the Guggenheim succeeds in examining Futurism’s often-fraught relationship with fascism and its leader Benito Mussolini. Futurists’ politics are confusing, as is the case with so many artistic movements (and artists) at the time; the polar shifts between communism and fascism and even anarchism can be hard to reconcile. In the early 20s, after the fascists rose to power in Italy, Futurism fought with other contemporary movements for political favour. Unlike in Germany, several competing aesthetic styles persisted in Italy throughout the 20s and 30s. Although the machine aesthetic adopted by the Futurists in the 20s is portrayed as a reaction against the classicising trend in art at the time, the influence of the later style is evident in the evocation of national heroes and the depictions of the human figure. The celebration of aviation as a marvel of mechanical progress is readily apparent in the fracturing of space and vertiginous viewpoint adopted by Tullio Crali in Before the Parachute Opens (1939), yet the depiction of the central figure, as the iconic, heroic national figure pushes the painting close to the classicising kitsch of socialist realism. Although these later works do pale in comparison to those from the early period, they are what make this exhibition so much more interesting. 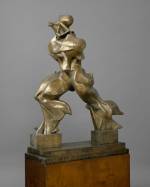 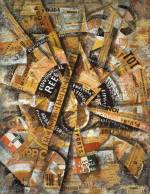 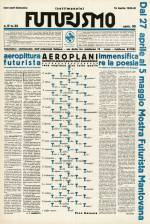