Truth and Memory: British Art of the First World War

Truth and Memory: British Art of the First World War

Truth and Memory at the Imperial War Museum in London is a major retrospective, comprising more than 120 works of British first world war art. Names such as Paul Nash, Stanley Spencer and John Singer Sargent hang in the air while their uncompromising images hang on the walls. For the curators of this exhibition, the challenge has surely been to tell the complex story of art at the dawn of modern warfare. This was a time when despair and disillusionment not only reigned in the hearts of the people, but also on the canvas and the page.

Truth and Memory runs alongside the reopening of the IWM London after its £40m refurbishment, in time to mark the centenary of the start of the first world war. It is a well-rehearsed fact that the outbreak of the “war to end all wars” ushered in a new age of mechanised conflict that would see destruction on a scale never before witnessed. The horseback heroics of the Victorian imagination were quickly forgotten as the inescapable reality of modern combat became all too apparent. The sheer scale of the event meant that a generation of young men from across the globe would be sent to the battlefield. In August 1914, seven million men marched off to war; by the end of the year a million were dead.

Conscription would see a new breed of soldier-artist. Many of the young British artists commissioned by the government’s propaganda machine saw active service. A significant number were public school-educated Slade graduates. They were the radicals of their epoch, who would set about rendering what they witnessed in the trenches in the many languages of modernism, a movement that initially provoked suspicion among those who regarded it as a foreign, corrupting, even pro-German influence.

One of the most zealous exponents of modernism was CRW Nevinson, a keen follower of the Italian futurist Filippo Marinetti. Marinetti announced: “We wish to glorify war – the only hygiene of the world.” But if Nevinson held this sentiment at the outset, he soon abandoned it on arrival in France in November 1914 where he was stationed as a medical orderly. Futurism celebrated speed, technology and violence in the modern world, but the grizzly reality that greeted the young artist was to begin a decline in his zeal for the movement’s ideology. However, the fragmented and energetic abstraction of futurism provided a new way of evoking explosive destruction, devoid of the romantic patriotism that had characterised the war art of the past. In this way, modernism’s diverse chorus of voices were rendering a new truth­, providing a modern art for a modern war.

It is this “truth” that the Imperial War Museum examines in the first half of its extensive exhibition of first world war art, most of which comes from its own collection. “Memory” follows, displaying artworks that sought to commemorate the war and the sacrifices made by an entire generation of men and women. But this division is less clear-cut than it sounds. In war, truth and memory seem inexorably linked. John Nash’s painting Over the Top (1918) depicts a disastrous advance by the Artists Rifles that wiped out all but a few of the company. The reality is clear. There is no glorious charge into battle, but rather the faltering khaki figures of doomed men scrambling into a snowy no man’s land. “I think the vivid memory of the occasion helped me when I painted the picture and provoked whatever intensity of feeling may be found in it,” he said.

John’s brother Paul began his military career in the home service, but in 1917 he was sent to the Western Front. He was injured and ordered home, an act that would save his life as days later the majority of his comrades were killed in action. Nash would return to the frontline, this time in the capacity of an official war artist, but his paintings did little to promote the war effort. One of his most famous pieces, included in this exhibition, displays his poetically bleak take on the conflict. It is a landscape totally devoid of figures. The earth is a sickly green, the hills blood red and there are no signs of life. The trees are dead and truncated, a symbol of young lives cut short. Its sardonic title We are Making a New World (1918) reflects the all-pervading bitterness that consumed those who survived.

The art of the first world war received mixed responses. Paul Nash’s surreal landscapes were met with confusion by some while Nevinson’s shift from the avant-garde language of futurism towards a more sombre realism revealed an uncomfortable truth. His later paintings became less concerned with technology than with the human casualties it caused, breeding contention among censors, who feared that A Group of Soldiers (1917), illustrating an ordinary group of Tommies, would provide proof to the Germans of “British degeneration”. His painting entitled Paths of Glory (1917), which depicts two dead British soldiers lying face down in the mud, suffered similar criticism.

There are too many moving pieces in Truth and Memory to cover here, but it would be an oversight not to mention Eric Kennington’s The Kensingtons at Laventie (1915). Painted in reverse on glass it is a sympathetic portrayal of Platoon No. 7, each weary figure a detailed portrait with a story to tell. Kennington kept a written account of the men featured. On the right stands Corporal Kealey, about to give his orders for the bedraggled company to fall in, while an exhausted underage private lies prostrate in the foreground.1

Truth and Memory painstakingly picks through the changing attitudes and diverse artistic responses arising from the incomparable conditions of the first world war. However, the overarching theme, once all stylistic concerns are put to one side, is that art has a unique and powerful ability to convey suffering and endurance – a point that is well made by the curators of this important exhibition. 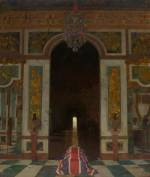 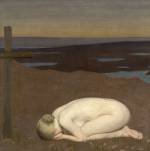