It is uncommon for a single idea to succeed in permeating the creative imaginations of generation upon generation of artists, without the looming threat of that idea’s obsolescence. The art historian, curator or critic able to identify such time-transcending themes is a rare entity, and experience shows that tying contemporary to past thought can leave one open to criticisms of historical insensitivity and sensationalism; of anachronism for anachronism’s sake.

Ruin Lust at Tate Britain runs that risk, but in focusing on our fascination with the destroyed and decayed, it makes its theme one that is unavoidably relevant to every age: cultural attitudes towards time and how its passage is manifested in the physical environment.

Where the word “lust” in the title implies sinful, furtive enjoyment of the destroyed, Ruin Lust encourages us to embrace this guilty pleasure, exploring the various creative approaches that artists have taken towards ruins from the 18th century to today, as well as providing crucial insights into the changing motivations for this. We see a progression, then, from the Romantic and Victorian nostalgia for an unknown classical past, through to the ruination caused by war from the 19th to the 21st centuries, to contemporary reflections on monumentality that conceive of the present as the future’s past.

As Brian Dillon outlines in his series of critical essays that make up the show’s catalogue: “The ruin traffics with more than one timeframe: it arrives from the past, but incomplete; it may well survive us, or slump into vacancy before our eyes; it stands as a warning for our own futures; it leaves room, among its empty vaults and vistas, for the invention of a new future; and most unsettlingly perhaps, it conjures a future past, the memory of what might have been.”1

With chronology laid aside, pairings of works are offered that suggest contiguity between current and past approaches to the ruin. The nostalgia inherent in JMW Turner’s Tintern Abbey: The Crossing and Chancel, Looking Toward the East Window (1794) is reflected in Constable’s Sketch for “Hadleigh Castle” (c1828-29). Although these calmly picturesque scenes are psychologically deeply opposed to John Martin’s The Destruction of Pompeii and Herculaneum (1822), all of these works conceive of the ruin as the indexical trace of a bygone age, its grandeur corroded but still present, with that corrosion lending it an enhanced grandeur. Yet a set of collages by John Stezaker throws a critical light on these nostalgic offerings: sitting next to Turner’s The Temple of Poseidon at Sunium (Cape Colonna) (c1834), Stezaker’s The Oath (1978) offers a courtroom scene over which is pasted a postcard featuring a romanticised set of ruins. Here, the picturesque is brought to trial through the postmodernist technique of appropriation, highlighting that the very root of the idea of the picturesque is not one of origins, but of imitation. A little way along the wall, Patrick Caulfield’s Ruins (1964) presents an equally pejorative take on painting’s preoccupation with the almost-lost: absorbed into Caulfield’s style of bold outlines and brash palette, these ruins seem whole again – structures in their own right, rather than traces of that which is gone.

What distinguishes these approaches seems to be a sense of the loss of the unknown, as seen in the picturesque representations, versus a loss of the known, as seen in the photography, sculpture and painting of ruins post-1850. For Turner and Constable, the past was a foreign country, which, by virtue of having never been experienced firsthand, was to be mourned through idealisation. Yet for Alfred and John Bool, whose photographs of south London were taken in the late-19th century, the dilapidated buildings and rusting signs were remnants of a time still present: not far from the crumbling houses, shops and warehouses in their photographs sat very similar buildings that were still up and running. Similarly, Tacita Dean’s 2006 film Kodak, which records scenes from the final period of production of 16mm film at the Kodak factory in Chalon-sur-Saône, France, charts an overlap between the near-past and the now by sentimentalising the dying days of a once-ubiquitous medium of communication.

Joseph Michael Gandy’s A Bird’s-Eye View of the Bank of England (1830) offers an intersection between these two extremes: Sir John Soane, architect of the Bank, commissioned Gandy to paint the site during its construction, with the intention of revealing to viewers how the Bank might also look once its buildings had risen, prospered, and decayed, many years on from then. Despite visualising the eventual ruination of his own building project, Soane did so with the mindset that the ruin is a positive aesthetic, one essential to the everlasting historical significance of the Bank, in that it placed the building on a par with the Parthenon and the Coliseum. A switch in attitude in the next century is explored in the final room of the show, “Cities in Dust”. Here, Rachel Whiteread’s photographic series Demolished (1996) narrates the complete destruction of two high-rise buildings on a London housing estate. The thrilling effect of these images is possibly derived from the swiftness with which a structure so huge can be razed to the ground – no fragments remain to mourn or idealise. The seemingly oxymoronic expression “controlled explosion” indicates that we live in a time in which depredation is not effected through the slow work of the elements; rather, we are now able to destroy our creations completely, leaving no trace. Not only that, but this obliteration, now that we know ourselves capable of it, is preferred to gradual erosion. With it, our attachment to the idea of the ruin has itself been obliterated, and nostalgia for that idea is all that remains: the ruin is in ruins.

Yet all is not lost: as we saw in Caulfield’s Ruins, something entirely new can be made from the fragmentary, and Paul Nash, whose work features heavily in this show, offers several compelling explorations of this idea. If ruins can become modern monuments, it is through lending those ruins their own integrity as symbols of an event or a time. Nash’s photographs Steps in a Field Near Swanage (c1935) and Monster Field (1938) heroise a truncated stone staircase and a burnt tree as though they had been built from nothing, rather than cut down from something larger than themselves. Even more powerful is the 1935 painting Equivalents for the Megaliths, in which Nash offers a set of minimalist columns, a gridded wall and an architrave as replacements for classical ruins. Are these suggestions for what might remain of our built environment when it falls to depredation? Or are they ideas for “ruined” objects that could be purpose-built to take the place of classical ones, should the latter cease to exist completely and leave unsated our appetite for the guilty enjoyment of a crumbling past?

Ruin Lust, with its network of complex sub-themes, is a challenging exploration of a many-faceted idea. The thematic nuances of the show occasionally outshine the works brought in to represent them, and often the removal of historical boundaries in the name of thematic cohesion means that too few distinctions – only distinct parallels – are drawn between works of different time periods. Yet, unlike many ideas-led exhibitions, Ruin Lust opens up channels of thought as much as it attempts to resolve them: why, for instance, our latent obsession with the dead and its indexical traces? Can we conceive of ruins as mainly physical and spatial constructs, or are they actually primarily temporal and psychological, even sensual? The exhibition taps into the thrill we feel in contemplating our temporal insignificance and our imminent non-existence, meanwhile highlighting that our hope of surviving biologically is subconsciously embedded within our cultural survival. 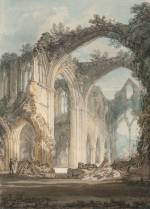