The East London Group and their Contemporaries

The East London Group and their Contemporaries

In the mid-20s, a group of largely working-class men came together in the East End of London and began to paint under the tutelage of John Cooper, finding fame for their realistic depiction of urban life. After 80 years in the wilderness, two exhibitions aim to revive their reputation 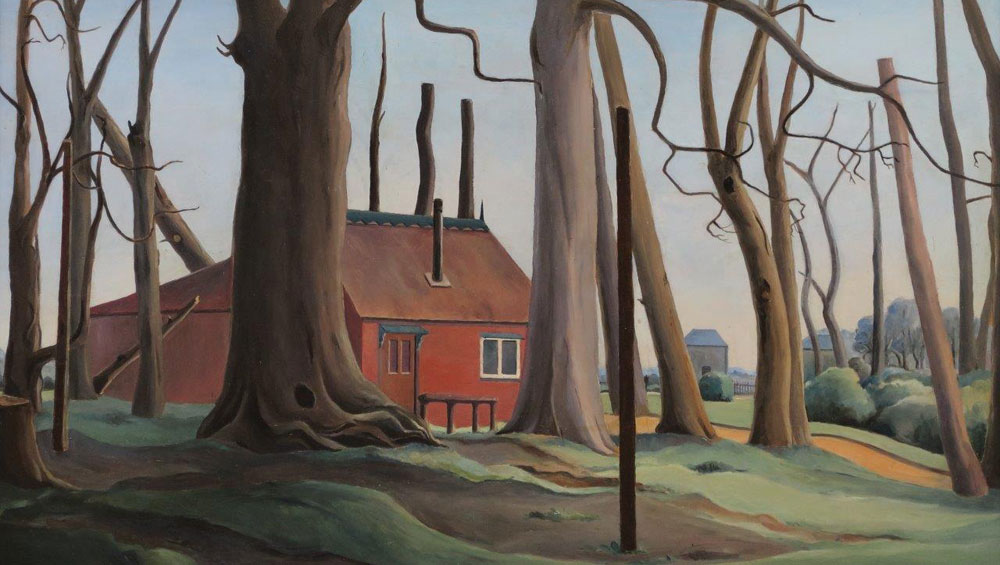 London artists of the early-20th century tend to be considered in geographical waves: the Bloomsbury Group, centred in the lofty streets around the British Museum, who, quipped Dorothy Parker, “lived in squares, loved in circles and painted in triangles”; the Camden Town Group, who congregated in studios in a gritty north London neighbourhood and sought to represent everyday urban life in a new, candid style. Contemporaneous with these famous artists were several painters known in their time as the East London Group; in the 1930s, they shared exhibitions with artists such as Paul Nash, Spencer Gore and Wyndham Lewis, and two of their number even represented Britain at the Venice Biennale of 1936. Languishing in obscurity until a small 2013 exhibition and the publication of a detailed book telling their story (From Bow to Biennale, by David Buckman), this renewed attention continues with the concurrent staging of two strong exhibitions.

The group developed from a series of evening art classes, begun in 1923, which were held first at the Bethnal Green Men’s Institute and then at the Bow and Bromley Evening Institute, and taught by the established and dynamic artist John Cooper. Cooper enlisted his friends Walter Sickert and William Coldstream to help teach the classes, which were attended zealously by working-class labourers who had often had little formal education. 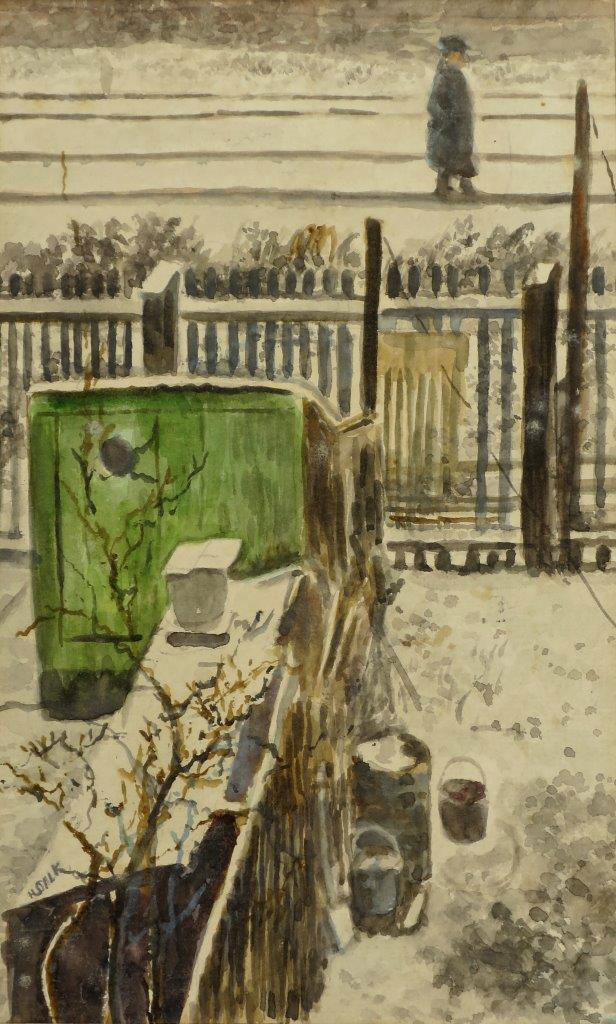 In 1928, thanks to Cooper’s connections and belief in his students’ talent, a series of works by the group – largely muted depictions of London street life – were exhibited at the Whitechapel Art Gallery. The show – supported by prominent art collectors Sir Joseph Duveen and Samuel Courtauld – was described by the influential Studio magazine as “little short of sensational”. 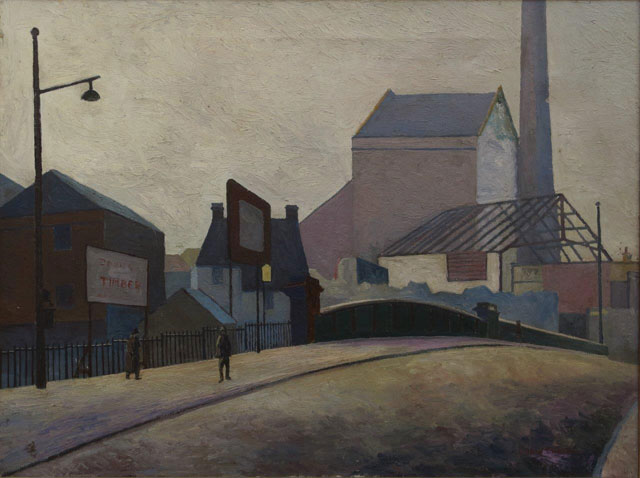 Several paintings were bought on the spot for the national collection by Charles Aitken, director of the Tate Gallery, and subsequently shown at the National Gallery, Millbank (now Tate Britain), as a proud display of “what British artisans can do in their spare time”. In November 1929, completing their symbolic ascendancy from East London to the glamorous West End, works by the group were shown at the prestigious Lefevre Gallery in Mayfair. The show was so popular with critics, high society and the general public that it had to be extended, and the group was given an annual slot in the gallery’s programme, which it filled until 1936. The artists received acclaim across the US and Canada for their apparent realism: “Never has there been so peculiarly English a group in modern art as these young working men,” exclaimed the Boston Evening Transcript.

At Southampton City Art Gallery, a wide-ranging exhibition sets the works of East London Group artists alongside several of their more famous contemporaries, including Sickert, Gore and Grant. There are works on show from a variety of artists: among them are Ruth Collet, Lilian Leahy, Henry Silk, George Board, Cecil Osborne and Grace Oscroft. The stars are a pair of brothers, Walter and Harold Steggles, who worked respectively in a shipping firm and a solicitors’ office. Their streets are often devoid of people or traffic, which imbues each small canvas with a slightly surreal, enigmatic – possibly, sinister – air. Instead, in sombre but delicate hues, they attest to the unseen spaces of everyday life: the backs of houses with dustbins and washing lines and smoking chimneys, street corners, smoggy canals and industrial bridges, rusty iron fences, cranes and bare trees, gasworks and walls and buildings with peeling paint. 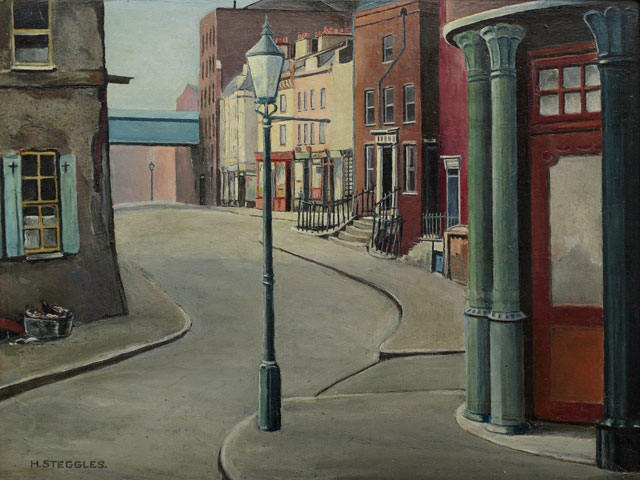 Most scenes are set around Bethnal Green and Bow, with houses silhouetted in neat patches of striking colour, highlighting buildings against the road and the sky. The cumulative effect is atmospheric, and often extremely beautiful, as pinks and blues and purples blend into a faded evocation of an abandoned industrial complex or a suburban bridge. 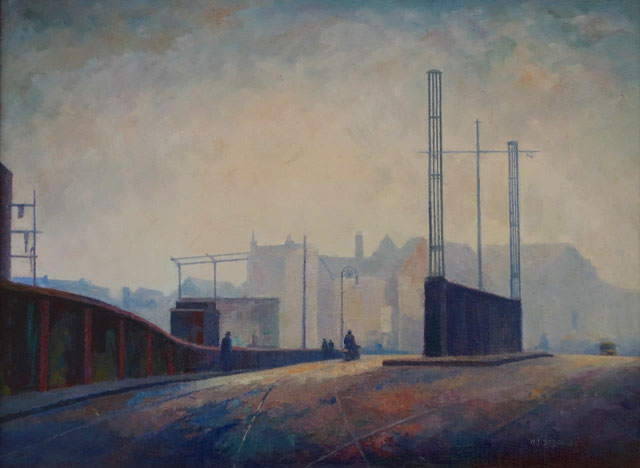 There are also several outstanding works by Elwin Hawthorne, who worked as an errand boy and casual labourer before finding employment as Sickert’s studio assistant. He was one of the group’s most prolific members, and the Lefevre Gallery staged two one-man shows of his work. His 1931 work Demolition of Bow Brewery bathes a skeleton roof and empty billboards in deep mauve, the light illuminating the doomed building and suffusing it with life for a final moment.

Harold Steggles’s painting St Mark’s Church, Victoria Park is a mysterious highlight: the wide street is empty of traffic, there are no signs on the shuttered shops or leaves on the trees, and even the clock face is bare. These works, stark and bleak, yet somehow wistful and intriguing, are akin to the lonely urban scenes of Edward Hopper, or the stark cityscapes of LS Lowry.

“We need painters who can see beauty in the life around them,” said Cooper in 1930. “Grim East End streets are suffused with real beauty. We need to get back to humanity in art.” At this time, the East End was considered a shady and disagreeable part of London, overcrowded and dirty, the antithesis to the fashionable West End where the flamboyant society artists gathered convivially in cafes, restaurants and nightclubs. The influence of Sickert is palpable in the group’s realistic depiction of urban life, and in the few interior still lifes on show. “The more our art is serious, the more will it tend to avoid the drawing room and stick to the kitchen,” said Sickert, and the group followed him in seeking quiet beauty in unassuming places. 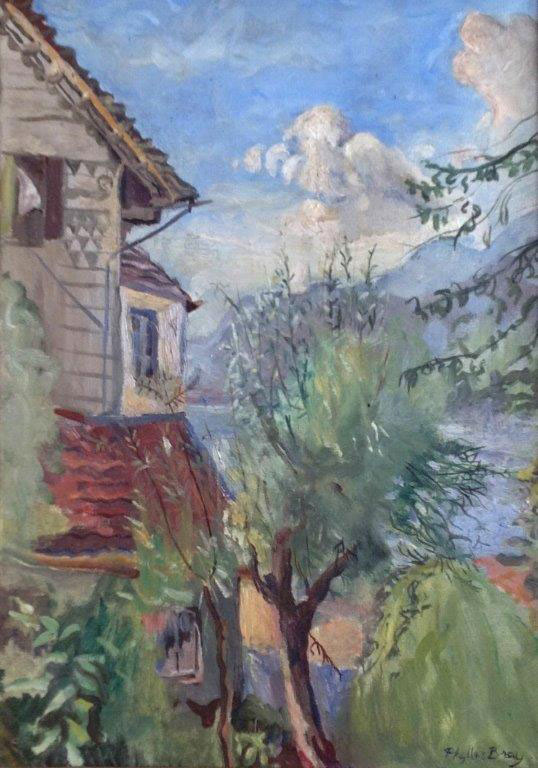 For some, the local area itself became their canvas: Phyllis Bray, an artist who married John Cooper, painted murals at the People’s Palace on Mile End Road, featuring dancers elegantly pirouetting in a parade. Alongside their urban works are various depictions of English landscapes, painted on the artists’ travels, some of which were co-opted by Shell as scenes for advertisements: Eastbourne seafront, Brighton pier, lighthouses, lakes and wild flowers, all conjuring an atmosphere of tentative leisure engendered in the uneasy period between the two world wars.

The Working Artist: The East London Group, at the Nunnery Gallery, a small but vibrant arts space occupying a former convent in Bow, focuses on the work of Albert Turpin, a window cleaner who became, in 1946, mayor of Bethnal Green. Curated by Michael Rosen and Emma-Louise Williams, this compact exhibition is more directed and political than Southampton’s. Turpin wrote of his desire “to show others the beauty in the East End and to record the old streets before they go”, and his urban scenes tell a tale of London’s changing landscape: terraced houses turn to postwar prefabs and then, strikingly, tall estates, while a 1953 painting of Columbia Market is juxtaposed with a work from two years later entitled Pulling Down Columbia Market. 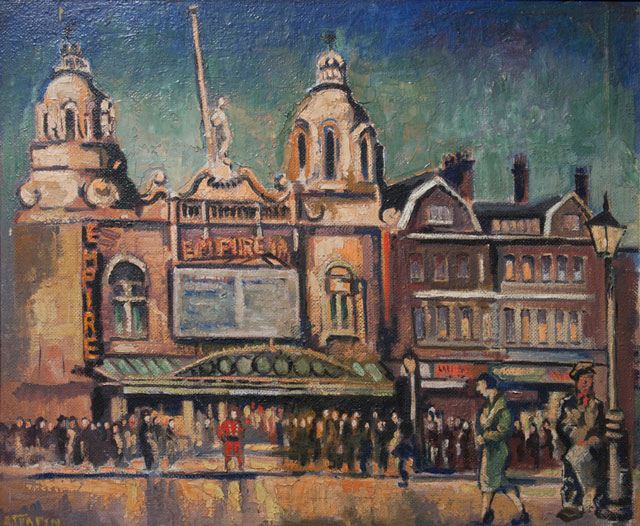 Turpin was born in Bethnal Green and joined the army at 15; after demobilisation, he cleaned windows in the morning and spent his afternoons at his easel. In the 1930s, he became increasingly involved in anti-fascist politics, and played a leading role in the Battle of Cable Street in October 1936, where a march of Oswald Mosley’s Blackshirts was jeered out of East London by local demonstrators. His care and gruff affection for the area where he was brought up is palpable in his attention to familiar local scenes – Bethnal Green tube station, the Queen Eleanor pub, the Sebright Arms, the Jolly Butcher on Brick Lane, the Hackney Empire. 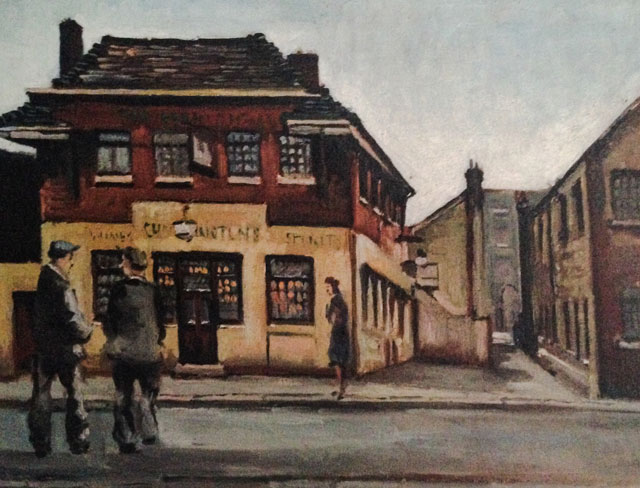 But his London was destined to change. His 1957 painting The Victoria – The Last House on Arline Street has a poignancy akin to that of Rachel Whiteread’s 1993 Turner Prize-winning work House, a plastercast of a Victorian terraced house in Mile End scheduled for demolition, which stood on a street already desecrated by bombing. “Our highest hopes for the future of English painting,” wrote the Sunday Times in 1929, “are centred in the members of the East London Group”. It praised their approach as “simple, direct and sincere”, and finished on a prayer that they wouldn’t leave east London for Paris, but would continue to chronicle the small beauties in their own surroundings. As London’s landscape continues to change beyond recognition, these quiet works offer a poignant reflection on the city’s past. 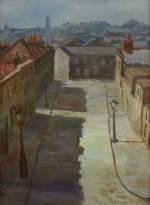 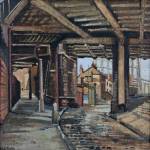 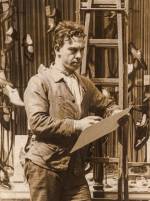