In 1905 Sickert returned triumphantly from Venice ready to take on and lead the new generation of British artists: ‘sent from heaven to finish all your educations’ as he modestly put it.1 The subsequent story of the Camden town pictures and the group that formed around him is now well known, most recently covered in the 2008 Tate Britain exhibition also curated by Robert Upstone.2 The smaller exhibition space at the DPG is well suited to more in depth shows of certain periods of an artist’s work, and rather than focus on these more familiar works this display covers the preceding nine years, examining the pictures Sickert made on his four major trips to Venice (1895–96, 1900, 1901, 1903–4).3 Through a grouping of his Venetian works into three main themes the shift from Impressionist landscape to intimate conversation piece is emphasised, putting forward the proposition that ‘Ultimately, virtually every aspect of Sickert’s later output… was to be adumbrated in his Venetian work.’4

One of Sickert’s earliest artistic acquaintances with the city would have been through his then master Whistler, whose Venetian etchings he helped to print as studio assistant from around 1882. Unlike these quiet and atmospheric scenes of unfamiliar back alleys and canals, however, when Sickert came to paint the city it was to the most familiar of sites that he turned: La Salute, The Rialto Bridge, and perhaps most prolifically, and most memorably, St Mark’s and the surrounding piazza. For many British artists at the time the idea of Venice was coloured not so much by native masters such as Titian, Tiepolo, or Canaletto, but through Ruskin and his followers, and the ‘artistic ethnographic tourism’ of the 1890s.5 Allied as he was to avant-garde continental painting, Sickert tended by contrast to view the conservative elements of British painting with disgust – later moving from an area of Venice because ‘it smells of the British & the Church of England & of Ruskin’.6

For the views of St Mark’s Sickert seems to have taken as a starting point St Mark’s as it Looks in the Early Morning of a Sirocco Day (1877–82) by Ruskin’s follower John Wharleton Bunney: a meticulous view of the cathedral painted over seven years of sessions in situ, during one of which Whistler apparently pinned a note to the painter’s back reading ‘I am totally blind’.7 Sickert’s series attempts to make a mockery of such detailed illusionism, pushing the façade of the building right up against the picture plane to emphasise the thickness, materiality, and ultimate artificiality of the paint surface. As with Monet’s series paintings – which Sickert may well have seen at his 1895 Durand-Ruel exhibition – the motif is repeatedly examined to bring out different plays of light and weather effects. Unlike these however, and unlike Whistler’s ‘Nocturnes’, the architectural details are carefully proportioned and often crisply outlined, an effect that gives the works some resemblance to photographs (perhaps most strikingly in Pax Tibi Marce Evangelista Meus, 1895-96, where the pale lime green and yellow hues makes the painting look uncannily like an old faded colour postcard).

Whether actual photographs were used or not it is certain that a base drawing (such as the large squared up one on display here) was used for the whole series of paintings, resulting in almost uniform proportions despite the very different paint effects,8 and allowing Sickert to fulfil twin aims of experimenting with series painting and of creating a large number of canvases which could be roped up and sent off to Durand-Ruel for sale. This eccentric and very individual way of working is used to particularly strong effect in Santa Maria della Salute (c.1901), where the underlying transfer grid is repeatedly re-painted in red with each new layer, finally left to show through and even in places over-painted in red so that the structure of the painting is held together and openly emphasised by these visible remnants of the working process.

While many of the works suggest such careful planning and measurement, in others the debts to plein-air Impressionism are more direct. Other paintings of the Salute – such as The Dogana and Santa Maria della Salute (c.1896) – seem to carry no such careful framework, and give the sense of having been freely sketched in front of the motif (the scenes made up of dabbed touches of pigment with light represented by thick paint-laden brushstrokes). As for Whistler, the exhibition devotes the second section to Sickert’s ‘Nocturnes’, or night scenes of Venice supposedly inspired by Whistler’s paintings of the same title (and in particular his Nocturne: Blue and Gold – St Mark’s, Venice, 1879-80).

Though there is some sense of atmosphere and mystery in these works, by the late 90s Sickert had quarrelled with Whistler and allied himself to Pissarro and Degas, even writing in 1912 that ‘It is just about a quarter of a century since I ranged myself, to my own satisfaction, definitively against the Whistlerian anti-literary theory of drawing’.9 One wonders if these strange gloomy scenes – with half glimpsed figures and cropped buildings fading into the background – in fact owe more to Degas and the twin currents of Realism and Impressionism. Sickert’s love of the city’s ‘old masters’ also shows through in these works; the palette of brown and glinting gold on black strongly suggesting Veronese, while Tintoretto’s sacred figures are a likely source for the glorious halos of golden yellow light emanating from behind, and almost sanctifying, the buildings in works such as The Rialto Bridge and Palazzo dei Camerlenghi (c.1895–6).

In 1903 Sickert was forced indoors by poor weather, and the final section of the exhibition is devoted to the subsequent ‘Portraits and Figures’. Taking his models from the local Trattorias he pushes the picture plane toward the subject, just as with the St Mark’s pictures, and creates a sense of both immediacy and almost uncomfortable intimacy. The figure group viewed from the waist up is a classic device in Venetian painting, familiar from countless Bellini Madonna and Childs and sacra conversaziones, yet here the free brushwork and knowledge that the figures portrayed are prostitutes gives away the then-shocking modernity of the works.10 While the titles of some works such as Mamma Mia Poveretta (1903–4) still carry associations of nineteenth century ‘problem pictures’, the immediacy and unnatural green and yellow of La Giuseppina: La Callera (1903–04) look remarkably close to Toulouse Lautrec or Picasso’s early blue period works (though Sickert proclaimed a dislike of both). Similarly, the model’s shadowed face in La Giuseppina against a Map of Venice (c.1903–04) is set against a blaze of bold red and yellow brushstrokes, showing the great effects to which the shift from natural to artificial light was put to use.

As Upstone suggests, some of these works certainly seem to be the direct precursors to the Camden Town series: The Siesta (1903–04) and The Yellow Sleeve: La Chiozzotta (1903–04) show his models reclining in the bed, albeit fully clothed; A Marengo (1903–04) and Les Vénitiennes (1903–04) show two models in conversation on a bed, albeit both female. Though it is only a small step to the Camden Town Nudes – and the characteristic scene of the naked female and clothed male on a bed together – the exhibition in fact leaves a number of questions unanswered. Why, for example, did Sickert first use then abandon the stunning colour effects that are such a common theme of his Venetian work? Why did Sickert paint few actual nudes in Venice, and take little interest in such genre scenes there? And why, if he was still so in thrall to Whistler, did he then revert to the ‘literary’ in painting Camden Town scenes? In some ways the show is part of a strange aspect in Sickert scholarship, that of seeing certain of his works only for the sake of what they might anticipate or prefigure.11 Given the quality of the works on display here – and given the quality of the exhibition as a whole – it is perhaps more interesting to look at these works as fascinating in their own right. 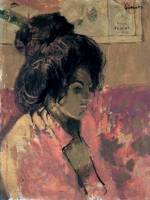 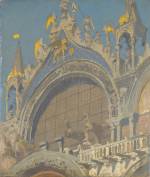 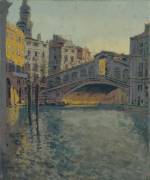