The painter Balthus died aged 93 in February this year. He was born in l908 as Balthasar Klossowski into a noble Polish family. Both his parents were painters and had lived in Paris since l903. He had never in fact visited Poland before receiving an Honorary Doctorate from Wroclaw University in 1998. His life and work is celebrated by the large-scale retrospective held currently at the Palazzo Grassi, Venice. This superb Venetian Palace, converted by Gae Aulenti in the 1980s, has provided a perfect and appropriate setting. 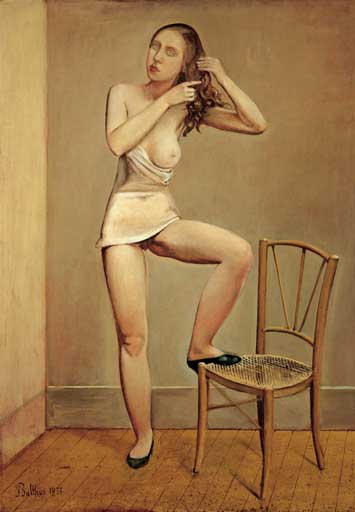 Figurative paintings by Balthus can easily be misinterpreted. They possess a distinct eroticism that had become all too easily regarded as his hallmark. Therefore, they need to be seen alongside those in which he concentrated upon landscape or portraiture and those which constituted his theatre sets and costume designs for opera and theatre, particularly Mozart’s Cosi Fan Tutte in l950 as well as Antonin Artaud’s own production of Shelley’s Les Cenci in l935. There are outstanding landscapes in which there is a discernible Chinese influence, particularly in those he painted from his studio in the Castle of Monte Calvello near Viterbo.

At the Palazzo Grassi in Venice, every aspect of the work of Balthus is thoroughly explored. There are over 200 items in the extensive catalogue. These include many paintings and drawings, which show the virtuoso technical skills he employed to achieve his serious intentions. The devotion that Balthus paid to the business of painting is exemplary.

Among his many achievements clearly observable in the exhibition is that in which he defended the great tradition of painting encapsulated in the fresco painting of Piero Della Francesca. In l926, still in his teens, he took the trouble to travel to Arezzo to paint his versions of Della Francesca’s series inspired by ‘The Legend of the True Cross’.

By doing so, he extolled the virtues of being a self-taught painter, in no way associated with any art school. He trusted the age-old method of studying the Old Masters of the Italian Renaissance.

There is a particularly eye-catching section devoted to the 14 pen and ink drawings that Balthus made while illustrating Emily Bronte’s Wuthering Heights. These were selected by Balthus himself from over 50 studies. In his own words you have a clear description of the mood he wished to evoke, ‘I want to put in them many things, tenderness, childish longing, dreams, love, death, cruelty, crime, violence, cries of hatred, howls and tears’.

These few words encapsulate the nature of the experience awaiting anyone prepared to travel to Venice to see this remarkable exhibition, which has paid proper and timely homage to Balthus in the year of his death as a defender of values increasingly endangered throughout his long lifetime.

In the exhibition, you will see how he took into account that world created by Lewis Carroll in Alice in Wonderland and how, despite the fact that he did not live or work in Poland, there are clear traces of the Polish creative spirit as expressed through the genius of Bruno Schulz, or Tadeusz Kantor, for example. The exhibition poster illustrates a masterpiece which Balthus had painted in l933 and which he chose to entitle enigmatically ‘La Rue’.

Artaud mentioned it in his review of the Balthus exhibition of the Galerie Pierre as ‘a street where dream automates pass by’. According to S W Hayter, the iconography of this painting was drawn from Lewis Carroll, where the young girl appears as a key player, identifiable as Alice, suffering from the aggression of Tweedle Dum. There are many and varied interpretations of this painting. In a typical Parisian street, the painting reveals nine characters in manner reminiscent of those which Tadeusz Kantor had created in his famous Theatre Cricot.

It was somehow appropriate that Balthus – who lived the life he was born to as a true Polish nineteenth-century aristocrat – should have been appointed Director of the French Academy by André Malraux. Balthus’ mission then was to undertake the restoration of the villa, which housed the Academy, and to open it to researchers, restorers and students. The Academy stands accordingly today as a testimony to Balthus’ preparedness always to defend the inherent orthodoxy which remains at the heart of a true European culture. 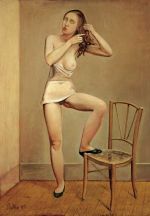