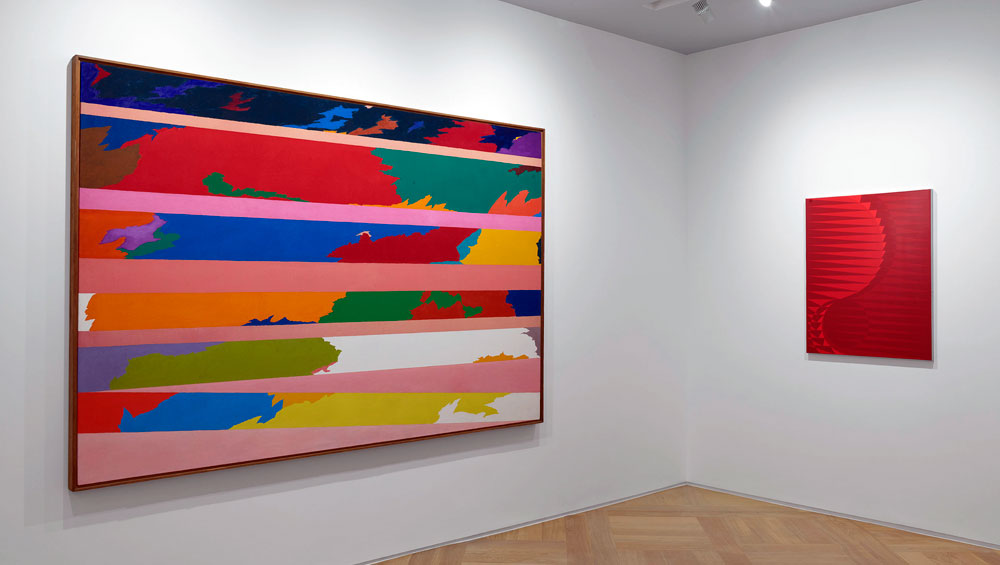 Abstraction in Italy developed out of the pioneering experiments of futurist artists such as Giacomo Balla (1871-1958). Futurist art has inevitably been tainted by the histrionic bluster of Filippo Tommaso Marinetti (1876-1944), the movement’s brazenly pro-fascist ringmaster. Marinetti, perhaps surprisingly, was described as “the only real revolutionary mind of his times” by the Marxist theorist Antonio Gramsci; he was also documented as one of the most connected protagonists of 20th-century abstraction in MoMA’s diagram tracing modernism’s artistic relationships.

Beyond polemic, the Guggenheim’s 2014 epic overview of futurism served as a reminder of its impressively multidisciplinary artistic accomplishments. But within the persistent cult of originality, a recurring criticism levelled at futurist painting in formal terms is its assemblage of coeval avant-garde idioms. As Lucio Fontana wrote in his White Manifesto, futurists were “subordinated to sensation”, and motion was futurism’s “solitary goal and objective”, and he later singled out Balla’s studies of movement as among the most modern artworks of the time. What was less clear was how the desired depiction of motion was to be achieved in stylistic terms. The founding futurist manifesto provided no artistic prescription, Marinetti being too caught up in his bombastic posturing while, in the second manifesto, Umberto Boccioni argued that painting “cannot exist without divisionism”. Several artists of futurism’s first wave used this existing style, while also adopting a largely cubist lexicon, a “souped-up cubified realism”, according to the New York Times.1 Balla had exploited the divisionist technique earlier in his career to great effect in works such as Bankruptcy (1902), a quietly devastating description of the graffitied door of a failed business. But Balla is usually – and rightly – seen as the most successful of the group in conveying movement, and in this respect he had been affected by the groundbreaking photographic studies of the dynamics of motion by Anton Giulio Bragaglia (1890-1960) and Étienne-Jules Marey (1830-1904). 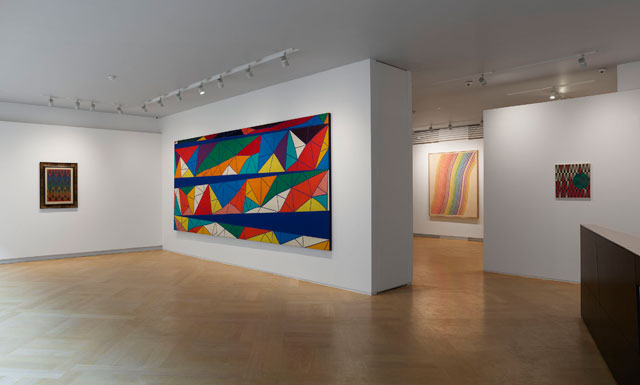 Balla’s assertive portrayals of movement were sometimes centred on the so-called heroism of machines – one of Marinetti’s obsessions – but also on the flight of swallows or the comic trot of a dachshund in Dynamism of a Dog on a Leash (1912), an attempt to apprehend successive stages of motion in closeup. But it was in his Iridescent Interpenetration series that he would produce his purest instances of abstraction. These are among the earliest geometric abstractions in 20th-century art, let alone in futurism, anticipating later movements such as op art, and even affecting the prismatic postwar fashion designs of Emilio Pucci.2  The radiating triangular and lozenge-shaped colour bands are present here in two startlingly different chromatic schemes, but all seek to convey the optical experience of light in motion and imply an extension of the picture surface into the environment.

That Balla sought to blur the division between the picture and its surrounding space is also suggested in later works present here, the Linee Forza di Mare series (c1919), in which he extended the undulating forms on the picture plane on to the curvilinear frames, an integral part of the whole. Futurism was the most long-lived of the avant-garde currents and this, too, is also illustrated in the presence of paintings dating from the late 20s, the artist still styling himself “Futur Balla”. A singular aspect of these works is their placement, virtually flush with the ceiling, just as Balla displayed paintings in his futurist apartment, a flamboyant Gesamtkunstwerk in the uber-staid Rome district of Prati.

It was in the kitchen of that apartment that Piero Dorazio (1927-2005) would come across Balla’s futurist paintings unceremoniously rolled up on a mezzanine. Through a serendipitous introduction on a park bench in 1950, the young Dorazio “discovered” a forgotten, octogenarian Balla, whose geometric studies provided an Italian lineage for postwar abstraction.

Dorazio had already co-founded the group Forma, intent on promoting abstraction with socialist leanings. In his 1955 book, The Fantasy of Art in Modern Life, Dorazio maintained that abstraction could change the world, its universal visual language fostering a “universal civilisation” reconciling formalism and Marxism. This ambitiously optimistic stance naturally seems dated, but the physical presence of Dorazio’s charged abstractions does not. His assured, all-over meshes of lines and ribbons, some curved, some rectilinear, convey the visual dynamism of Balla’s motion studies while having their own distinct stamp. Intense colour is vital throughout, imagined as a compositional device and not for its expressive potential, Dorazio having forthrightly declared: “I am not colour, and I do not personify it as Pollock did,” although he was affected by the transcendent bent of Wassily Kandinsky.

Dorazio’s nexus of artistic friendships is also worth considering when looking at these works, its international cast particularly telling given that he bemoaned the petty provincialism of Italian culture. Among these friends was Balla, of course, but also Kandinsky’s widow Nina, Gino Severini, the abstract expressionists Barnett Newman and Willem de Kooning, their doctrinaire champion Clement Greenberg, and, perhaps unexpectedly, the sorcerer of assemblage Joseph Cornell.

Before the polychromatic works of the 60s, the period that predominates in this installation, Dorazio produced densely molten near-monochromes, of which there is an example here, Incomunicando IX. The grid that articulates most works, with varying tautness, also constitutes the heart of the painting of Gianfranco Zappettini (b1939). The grid is deemed one of the defining emblems of 20th-century western art, the “protectiveness of its mesh”, according to art critic Rosalind Krauss, functioning as a barrier against all intrusions from the outside world.3 By the mid-60s onwards, that autonomy seemed distinctly less modern, as did an adherence to painting, by then on its post-painterly last legs. Nonetheless, in a 1976 interview with Studio International, Zappettini declared a commitment to renewing the medium: “It is possible at the moment to rebuild in painting an autonomous language not derived from other disciplines, which can have its own terms of reference”, a statement that could have come straight out of Greenberg, almost 10 years after John Latham had chewed up and spat out the critic’s book Art and Culture. Zappettini’s resolute nonconformity seems all the more striking in an issue – devoted to Italian art – that otherwise focused exclusively on arte povera and performance art.

The most represented works at Mazzoleni are the Strutture, rhythmic, monochromatic sequences, some singularly sheathed in plastic. Visually, these instantly evoke Balla’s Iridescent Interpenetration series but, beyond the aesthetic outcome, the proponents of Pittura Analitica ascribed equal importance to analysing the medium’s processes and materials, whether through the use of industrial paints and rollers, or the tactile acknowledgment of the painting as an object, emphasised here by the plastic wrapping.

Group shows run the risk of diluting the identity of the individual, but visual correspondences are compellingly performed here, to the advantage of all three artists, each exploiting the distilled arrangement of colour and geometric form to effect the illusion of movement. The pioneering status of Balla in manipulating painting’s optical and kinetic potential is also reinforced, as are Italy’s contributions to 20th-century abstraction, the aura of Manzoni and Fontana always lingering within the manifold permutations of postwar art. Accompanying the exhibition is a strikingly designed, bilingual catalogue with instructive contributions from the three curators, Elena Gigli, Mirta d’Argenzio and Alberto Rigoni, albeit marred by a subpar English translation.