In 1947, Italian photographer Giuseppe Cavalli (1904–61) co-founded the group La Bussola (The Compass), which, as part of its mission to “establish a valid aesthetic credo for photographers,” asserted: “We believe in photography as art. […] It is equally possible to be poets with the lens as with the brush, the chisel or the pen.” Certainly, the selection of Cavalli’s works currently on show at the Estorick Collection confirm this statement. Muted and monochromatic, yet exploiting myriad shades of white, his bleak, unpopulated land- and beachscapes, are prematurely postmodern, reflecting a further axiom of the group that “in art the subject has no importance at all”.

The aptly named Encounter (1957), for example, is wistfully lyrical, looking up to the sky, where the branches of two trees, fecund with leaves so bright as to be almost translucent, reach in from opposite corners to meet one another at the midpoint.

In Boats in the Harbour (not dated), the peculiar choice of perspective immerses the viewer in a vast foregrounded expanse of dark, non-reflecting water, whilst, in the upper half of the composition, the ripples abound with the reflection of the sun. Similarly, in Shadows on the Beach (1947), the undulating sand, abandoned by the ebbing tide, captures glints of the sky in the shallow pools that remain.

Cavalli’s work spans a variety of genres, and, besides these sun-bleached southern Italian landscapes, he also produced a number of highly posed still lives and portraits. In these too, light remains the key protagonist. Bottles, pipes, padlocks and draped towels bask in the Mediterranean heat, and a young boy is seen from behind as he leans over a white painted roof terrace wall. All the while, however, Cavalli’s tonal contrasts remain nuanced to the extreme. His work is characterised by his use of bright, even lighting, which has an overall bleaching effect, reducing shadows to mere ghosts. The inclusion of works by his students and associates only highlights this further, since, whilst many of them tackle similar compositions, their blacks really are black, not grey, and the vanishing points of their horizons are clear to make out. Cavalli’s works are unique in their simultaneous haziness and clarity, and a subtlety of shading which serves only to underscore the barren solitude he seeks to depict. 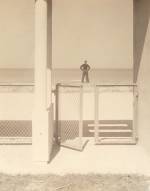 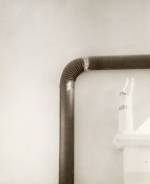 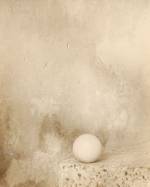