Nottingham Contemporary takes a richly rewarding descent into the art of the underground: a place for ritual, transformation and storage depots 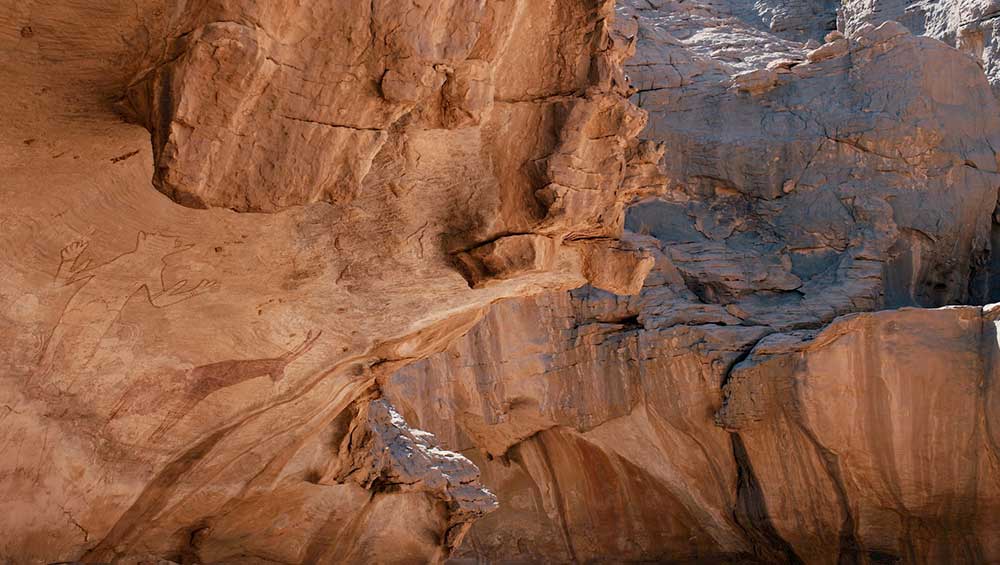 Tassili n’Ajjer, a national park in south-eastern Algeria, is home to rock paintings and engravings dating back thousands of years. They feature humans, demons, ostriches, antelopes and, in possibly the first known depiction of a psychedelic ritual, a bee-headed shaman whose body appears to be sprouting mushrooms. Early this year, the Algerian artist Lydia Ourahmane travelled to the park with a band of collaborators. Her video work Tassili (2022) takes us deep into its crags and caverns. Scored by four musicians, it turns the caves into a sensational experience for us to ingest from afar, itself a sort of trip.

Yet there are hidden stories behind Ourahmane’s film. The region in which Tassili n’Ajjer lies is politically and physically virtually inaccessible. Close to the Libyan border, it remains an unmanaged territory. Westerners – such as the galleries that commissioned this film – are seldom allowed to enter. The water sources that make travel to the park possible are rapidly drying up: when Ourahmane first visited there were three, now there is only one. Tassili n’Ajjer is already testament to a long-lost civilisation; soon, it may be cut off for ever, becoming a ruin of our own environmentally destructive society. 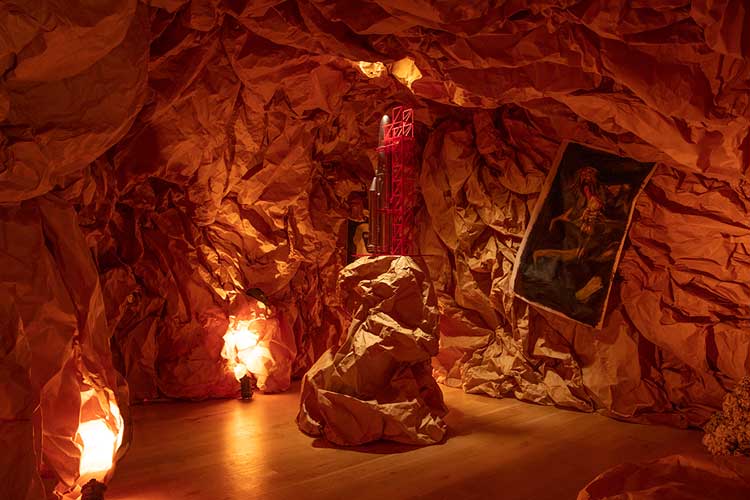 As well as a record and warning, though, Tassili is also an enchantment. The film’s overwhelming effect is to conjure the natural sublime. In this, Ourahmane joins a long, disparate lineage of artists attracted to the majesty of caves. Joseph Wright of Derby’s beautiful A Grotto in the Gulf of Salerno (1780) shows the milky, moonlit sea through a passage of rock. Caragh Thuring’s Inferno (2018) depicts a group dressed like those on a Regency-era Grand Tour dwarfed by a flaming volcanic cavern. Ben Rivers’ Look Then Below (2019) turns the netherworld of the Wookey Hole caves in Somerset into the luminescent home of a future humankind. And the Egyptian artist Hamed Abdalla was so fascinated with grottoes that he began to see painting as a sort of sedimentation. His Convulsions (1977) series appears to be photorealistic images of rock formations, but is actually paper sprayed with acrylic, crumpled and flattened out again. 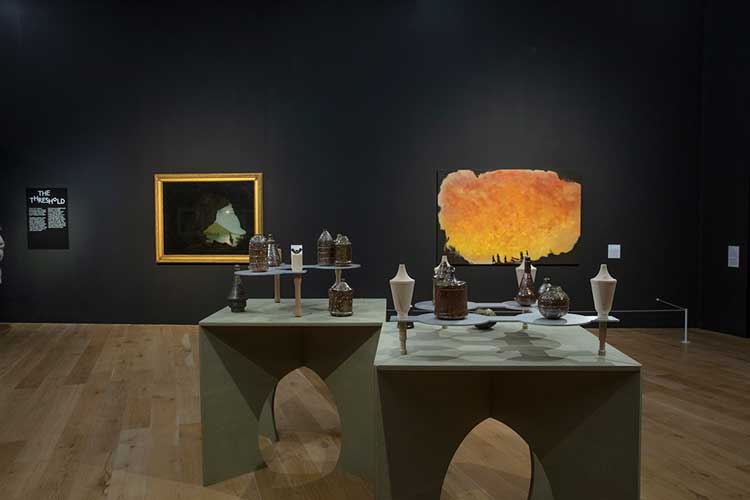 All these works feature in Hollow Earth: Art, Caves & the Subterranean Imaginary, a themed exhibition at Nottingham Contemporary. Its location is appropriate: Nottingham is home to Britain’s largest network of man-made caves. The city centre squats on soft, easy-to-cut sandstone hills that have been burrowed into for centuries. More than 800 caves and tunnels have been discovered. They have been used as secret passages, storerooms, tanneries, prisons, breweries, malt kilns, pubs and, latterly, dumping grounds. Caruso St John’s RIBA Award-winning home for the art centre itself has cave-like qualities, successive layers sinking down deeper into the hill face.

The Hollow Earth was curated by Sam Thorne, Nottingham Contemporary’s outgoing director. “Caves,” Thorne writes, “resist being understood. Perhaps this is why artists return to them. When we cross the threshold to a cave, what we think we know recedes from view.” Caves have long been a subject of curiosity. A page from the German polymath Athanasius Kircher’s Mundus Subterraneus (1665) shows the interior of the Earth filled with interconnecting paths of fire. “The whole Earth,” he wrote, “is not solid but everywhere gaping and hollowed with empty rooms and spaces, and hidden burrows.” 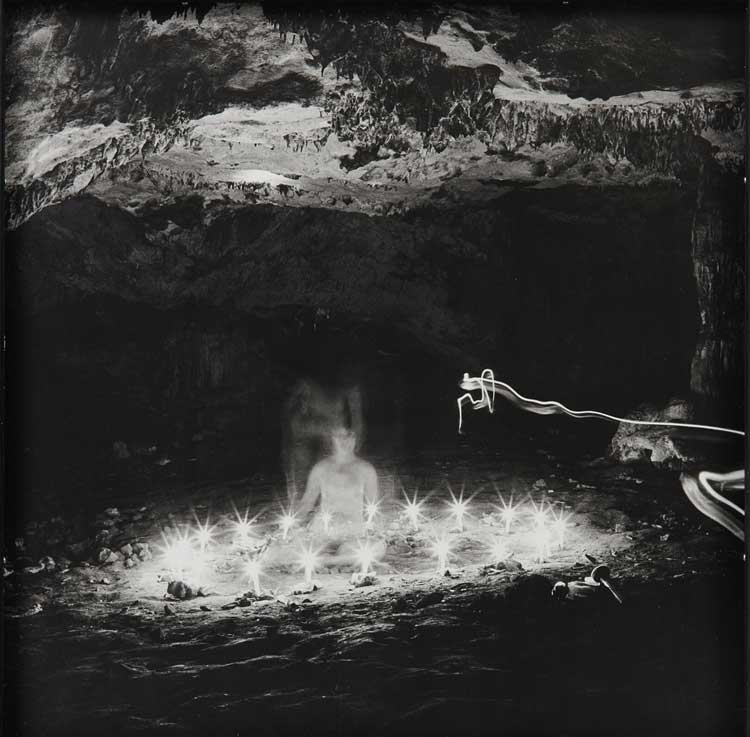 Kircher was wrong on this, as he was on much else. But the sense that caves contain secrets has persisted through societies. Since the amateur archaeologist Marcelino de Sautuola’s eight-year-old daughter María discovered painted bison in the caves of Altamira in northern Spain in 1879, caves have become associated with our prehistoric past. They have also often been associated with passing into another state, from the Tassili Mushroom Man to Aeneas’s descent into the underworld. The American artist Mary Beth Edelson staged candlelit ceremonies in a cavern in what was then Yugoslavia, as recorded in her Grapceva Neolithic Cave Series (1977). In Santu Mofokeng’s Chasing Shadows (1996-2014) series, the photographer captures people engaging in animist rituals in the caves of central South Africa.

Arguably the most significant change of state a human can undergo is the passage from life to death, and caves have long been associated with the afterlife. More mundanely, the underground world is cold, sealable and out-of-the-way, providing perfect conditions for the storage of the dead. A 1963 photograph of the Capuchin Catacombs of Palermo by Peter Hujar, lined with skeletons dressed in their finest coats, captures a sort of burlesque of the living world. Probably the most famous underground ossuaries of all are the Paris Catacombs, created in the 18th century within tunnels built for the city’s ancient limestone mines. They contain the remains of more than 6 million Parisians. At Nottingham, we see the photographic pioneer Félix Nadar’s ghoulish 1862 depiction of the piled-up skulls and bones. The catacombs were, said Nadar, “one of those places everyone wants to see, and no one wants to see again”. His shot has been credited with kickstarting the site’s continuing tourism. 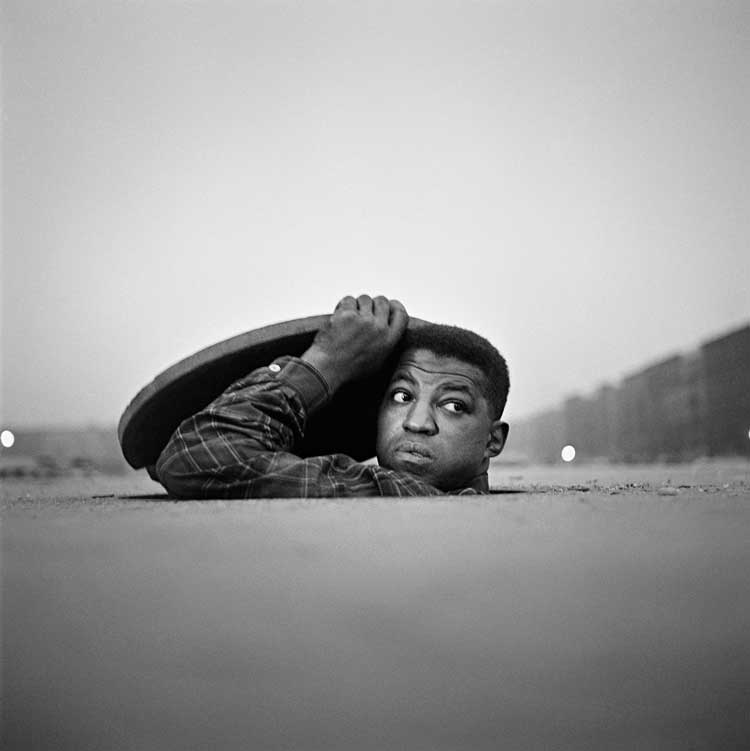 More than a century later, Gordon Matta-Clark journeyed down himself. His Super 8 video Sous-sols de Paris (1977) wanders through the French capital’s extraordinary network of underground spaces, from crypts to car parks. Some of the most interesting work in the exhibition captures the more mundane uses to which caves have been put. The Hollowed Earth (2017) series of photographs by the Center for Land Use Interpretation capture America’s underground office, storage and logistics facilities. One image shows a flag-covered lobby, another a bathroom, both burrowed into the aged walls of an old limestone mine. Building underground can be both spatially convenient and secure: a section of the exhibition themed The City includes a proposal from the architects Hans Hollein and Walter Pichler, in 1964, for an underground city, a place of refuge from nuclear fallout. 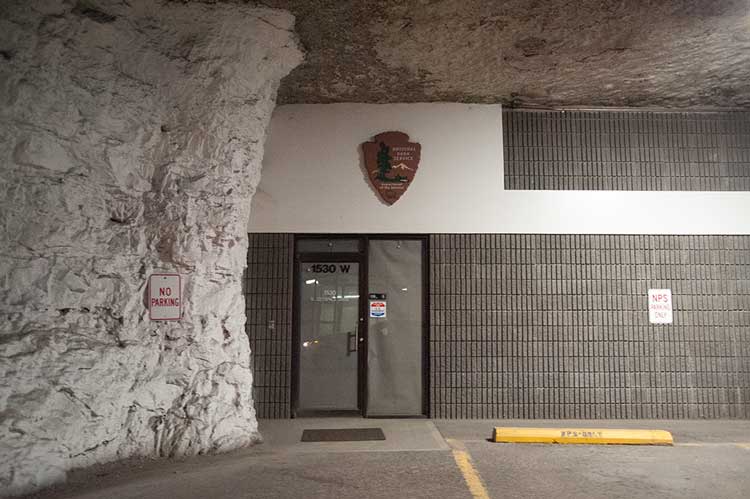 The Hollow Earth abounds with such fascinating exhibitions and artworks. Thorne and his team have been unafraid to push the limits of their topic. Barry Flanagan’s A Hole in the Sea (1969) saw him bury a plastic drum in the sand on a Dutch beach and film it from above as the tide came in. A trio of etchings taken from photographs show this strange circular form in the sea. Although seemingly far from cave systems and underground chambers, this strange artwork surmises a lot that makes the subterranean so interesting: it is both a space and a void, a presence and a hollowing out.