Marking the 50th anniversary of Flanagan’s first solo show, this exhibition affords visitors a glimpse into the huge range of his work – work that has influenced a generation

Animal, Vegetable, Mineral marks the 50th anniversary of Barry Flanagan’s first solo show in 1966, but this is not a survey of his life work, as the timing might suggest. Instead, this exhibition acknowledges the huge range of materials that he used, from collage and sculpture to video and land art.

Flanagan (1941-2009) was a poetic sculptor par excellence. The Welsh-born artist made regular appearances on the pages of Studio International in the 60s and 70s, contributing a page of prose in 1967 that contained the statement: “One merely causes things to reveal themselves to the sculptural awareness. It is the awareness that develops, not the agents of the sculptural phenomena.” These oft-cited lines reveal a great deal about Flanagan’s process, but, to my mind, a sentence further down the page reveals as much: “The sculpture seems to have a life of its own, precocious, like the child we realise has a way its own – precocious.” If Flanagan’s sculpture took on a childlike life of its own, that was surely in part due to his own guileless enthusiasm for the materials he used and their properties.

Flanagan is perhaps best known for his iconic bronze hares, but these trademark pieces seem out of place in the avant-garde context of his early work. Nonetheless, this animal took hold of the artist’s imagination. He reported that his fascination with them started when he saw one running on the Sussex Downs in the late 70s, and they became a recurring theme for the rest of his life, so much so that they took on an almost talisman-like significance in his art. At times nonchalant, often mischievous and always playful, Flanagan’s hares embody the energetic spirit of an animal that holds a special significance in many cultures. But in Britain – where its mysticism has endured since the bronze age – this animal occupies an especially powerful place in the imagination. For many centuries it was believed that witches could turn themselves into hares and it was therefore considered bad luck if one crossed your path. It seems fitting, then, that Flanagan anthropomorphised his bronze versions of this allusive creature by making them dance, giving them drums and mounting them on horses.

This exhibition contains a typical Flanagan hare, standing alert and vigilant on its hind legs atop a stone base carved into a claw holding a ball (Ball and Claw, 1981). This is not a fluffy, sentimental representation of a hare; in fact, it looks sinewy as though it has been skinned. Its direct, blank stare gives it the air of a statue of Anubis, and it is beyond doubt that the ancient world directly inspired Flanagan. Among annotated Polaroids and sketches displayed in the vitrines in the first room of the galley is a telling note written in the artist’s hand: “Janus double faced early Roman god knew about present and future god of the doorway protector of all entrances.”

The timeless monumentality of his bronze hares sits in contrast to the more temporary materials that Flanagan uses in much of his other work, which became linked with the embryotic land art movement of the 60s. As the names suggests, land art sought to use natural materials in the outdoor environment to produce artworks that were largely transient in nature. But Flanagan also brought the outdoors into the gallery space. Hessian sacks, soil, rope and sand are lifted from their external contexts and placed inside. His One Ton Corner Piece (1967) is simply a pile of sand in the corner of the room, which sits on a piece of canvas. It seems like an early prototype of Olafur Eliasson’s Riverbed (2014-15), a large-scale project that brought more 180 tonnes of Icelandic rock indoors.

The unapologetically named Her Warm Tit Rolls (1981) resembles a marble snail’s shell. Partly rough-hewn and partly polished to a smooth finish, it gives the impression of an emergent form, reminiscent of an Auguste Rodin sculpture (Flanagan gave several of his hares titles that were variations on “The Thinker.”) Many of of his stone works crease and fold in on themselves, giving the impression of soft, oddly shaped pillows or vaguely recognisable (and personal) body parts. This gentle eroticism is more explicitly played out in his video piece Sand Girl (1970). For 17 minutes, the camera moves in and pans across the naked body of woman, pausing on her hips, genitals and breasts while sand is poured on to her bare skin. She becomes a living landscape, her undulating contours resembling sand dunes or the rolling Welsh hills. Her face is never revealed, so her body remains impersonal, an abstract symbol for womanhood and sexuality, like Gustave Courbet’s L’origine du Monde.

Displayed in the same room is Heap 3 (1967), a pile of green, purple and yellow “sausages”. These coloured tubes, which are made from dyed hessian filled with sand, preempts the aesthetics – if not the ideology of – Sarah Lucas. In fact, the more you learn of Flanagan’s work, the more you see it in the artists who followed him. In that way, Flanagan was an artist who looked back and forward at the same time, borrowing from the ancient, while anticipating the future. In this, Flanagan was himself, an artistic Janus. 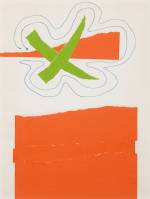 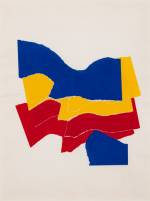