Two of the 14 original sculptures are accompanied by other work from that time, alongside maquettes and models, and documentation from a special edition of Studio International produced to accompany the 1972 project 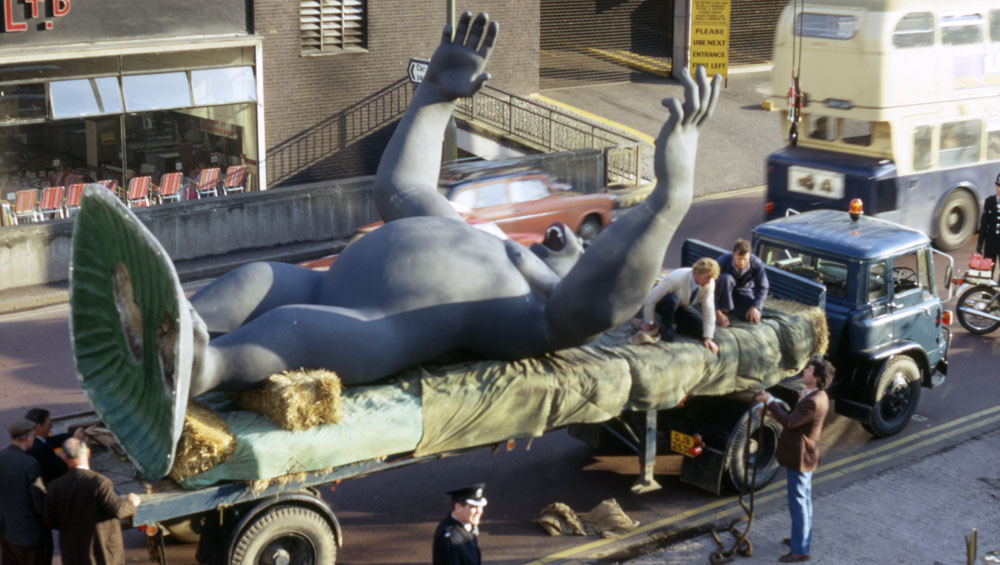 City Sculpture Projects, which has just opened at the Henry Moore Institute in Leeds, revisits the Peter Stuyvesant Foundation’s City Sculpture Project of 1972, which was an ambitious attempt to introduce a broad public to the latest developments in modern sculpture. It resulted in the temporary siting of 14 sculptures in Newcastle, Liverpool, Sheffield, Birmingham, Cambridge, Cardiff, Southampton and Plymouth. The sculptures were all offered for purchase to the cities they were shown in, but not one took up the offer. Some were damaged by vandalism at the time, some destroyed afterwards, others found their way to school playing fields, museums or private collections.

Helpfully for art historians of the period, or those interested in the broader history of public sculpture, an accompanying publication by the Henry Moore Institute (HMI) introduces the project, documenting rejected or unrealised proposals and the basic facts of the sculptures’ commissioning and afterlives. The HMI exhibition itself includes two sculptures out of the original 14, William Turnbull’s Angle and Nicholas Monro’s King Kong, as well as other works made in or around 1972 by some of the other sculptors, alongside maquettes and models, some original and some specially remade, and photographic and other forms of documentation.

The 1972 exhibition was accompanied by a special edition of Studio International, in its original paper format. As well as essays on the history of public sculpture, the magazine provided extensive, if occasionally misleading, documentation of the City Sculpture Project. Photographs of different proposals, including some of those that were not realised, were accompanied by commentary – by no means always positive – from the artists involved.

The voice of the public whom the exhibition hoped to edify and educate was also present in the publication, in the form of a selection of local newspaper clippings, and in notes made by some of the artists. A vicar in Cambridge appealed for someone to blow up the – already much-vandalised – contribution from Barry Flanagan (1941-2009), while Turnbull’s six-part, stainless-steel sculpture led “Liverpool expert” (and local sculptor) Arthur Dooley to proclaim: “The kids will eat this one.” Garth Evans (b1934) recorded the citizens of Cardiff talking in the vicinity of his sculpture, including the excerpt quoted above. The recording is playing in one of the HMI galleries. Transcripts have recently been published in a small book, while they are in the process of being made into a play due to open in New York next year.

As Jon Wood, the curator of the HMI exhibition, notes in his introductory essay, it is likely that no one apart from the organisers saw all the sculptures that comprised the City Sculpture Project. This meant that, from the outset, the Studio International publication stood in for the project as a whole. The HMI’s revisitation expands on, and in places corrects, the documentation Studio International provided. It seems unlikely the project would have been revisited without the publication to return to, and, in a way, it is as much the object of the HMI’s attention as the exhibition considered as an array of 14 sculptures temporarily located across Britain in “concrete shopping centres, underpasses and pedestrian thoroughfares”.2

Monro’s King Kong was used on the cover of the Studio International special, and its maquette appears on the cover of the current HMI publication. This prominence is continued in the exhibition. Situated outside the HMI, on the night of the opening, King Kong loomed, smooth and sexless, over the stalls of a winter market, illuminated, appropriately enough, by the flashing lights of two child-sized fairground rides. The maquette is then the first sculpture to greet the visitor on entering the galleries themselves. Despite its five-and-a-half-metre height, and the slightly confusing intervention of the diminutive rides, the full-sized King Kong was somewhat smaller and less imposing than I had imagined. On the Studio International cover, it was dramatically photographed from below against a featureless sky, while the photograph used in the HMI publicity material shows with it with small children huddled around its ankles. Perhaps my confusion was due to the fact that the sculpture seems almost entirely reliant on size for its effect.

The sculpture was originally sited outside the Bull Ring in Birmingham. Amusingly, Monro (b1936) chose the subject because, where the project as a whole was “city-orientated”, it was “city disorientated”. Wood suggests an ironic and quietly critical relation to the “socialist realist statuary of the 1930s, with its celebration of the power of political leaders”.3 Although I don’t know enough about Monro’s work to judge the plausibility of this connection, I suspect that it would have been lost on most of the onlookers. A newspaper clipping at the HMI tells the story of a lollipop lady who was the only contributor to a fund to raise money to keep the sculpture in Birmingham. “The statue gives me a sense of security,” she said. I suppose this was one aim of socialist realism? Fragments of local colour are one of the main pleasures of the HMI exhibition.

Despite its prominence, King Kong is the odd gorilla out in the original exhibition and the HMI’s revisitation. All the other works were, and are, abstract. The 60s had been a great period for abstract sculpture in Britain, one which – apart from some of the individuals involved – has been unfairly neglected since. A huge quantity of sculpture was produced at this time. Characteristic work of the period drew on recent developments in painting, was brightly coloured and made of rigid industrial materials, mainly steel and plastic. Though distinctly urban in feel, particularly in comparison to the sculpture of Henry Moore, this was art made for a gallery setting, and only really comfortable there. The City Sculpture Project, and the number of similar, if less ambitious, exhibitions across Britain at this time, can be seen as attempts to move sculpture back into the public realm, where it had previously flourished in the guise of statues of royalty, generals and local philanthropists.

In a public setting, a sculpture of Queen Victoria or King Kong has the advantage that it is immediately comprehensible to passersby, who may not give it more than a moment’s thought. Even if seen briefly out of the corner of an eye, it imposes its meaning – or at least its identity – on the viewer. There is Victoria, there is King Kong. Conversely, one of the advantages of abstract sculpture is that it does not impose itself in this way: it demands and rewards a different, more considered, more open-ended form of contemplation (an exception to this is the vertical monolith, one of most venerable forms of abstract sculpture and seen in City Sculpture Project in the work of Peter Hide (b1944), Bernard Schottlander (1924-99), Kenneth Martin (1905-84) and Liliane Lijn (b1939)).

The committee who selected the sculptures for 1972 exhibition were keen for sculptures to respond to their sites. Artists such as William Tucker (b1935) and Turnbull (1922-2012) seemed to have considered this very little: in fact, both were actively hostile to the idea of doing so. In others, it prompted reconsiderations of their work. Previously artists who made sculpture for gallery spaces, Tim Scott’s (b1937) and John Panting’s (1940-74) proposals (Scott’s was not realised) functioned architecturally, were to be moved through as much as looked at. The piece for Birmingham by Robert Carruthers (1925-2009) could also be moved through and across. Nigel Hall’s (b1943) proposal for seven light beams to shoot through the night sky across Sheffield was a clear development of his dematerialised linear sculpture, but was also not realised.

If the main aim of the City Sculpture Project was to bring abstract sculpture out into the wider world, the beautifully installed main gallery at the HMI brings it back home to the rarefied atmosphere of the white cube. Reductive sculptures by Turnbull, Hall, Bryan Kneale and Tucker give us a tantalising glimpse of how developments in Britain met both European constructivist and American minimalism. The juxtaposition of Hall’s delicate hanging piece with the assertiveness of Turnbull’s Angle is particularly striking. The mood is quiet and austere, far from the spaces the project originally occupied. While King Kong greets visitors outside, these sculptures seem to ignore both their surrounds and any potential visitor.

This turning away is arguably central to modernist sculpture, part of the freedom it offers the viewer. Here it is perhaps over-exaggerated by the positioning of Tucker’s Beulah (1972) on a grey plinth and near a wall. Probably down to the requirements of the lender, this creates a striking silhouette but completely isolates the sculpture from the physical world. The haptic sensations Tucker hoped to provoke are dampened in favour of optical effect. The HMI’s central display suggests the potential for another exhibition, one that is not restricted to a single project, however ambitious, and which displays more completely a moment when abstract sculpture in Britain was realigning itself after the advances and bright colour of the 60s.

The problem the City Sculpture Project faced was a difficult one – how to present in public an art form whose recent development was largely tied to its abandonment of a public role. Despite the successes of some of the individual sculptures themselves, it is hard to say that the project entirely succeeded in surmounting this difficulty, as the failure to get any city to permanently take on a sculpture shows. The HMI’s rewarding exhibition well illustrates the dilemma and provides an interesting cross-section across sculpture in Britain in the early 70s, even if this is largely provided by photography, models and maquettes. Perhaps the current exhibition introduces tensions of its own – between an archival and a direct presentation of sculpture; and between an approach to a period that returns to the inevitably contingent and particular choices of a single exhibition, and one that attempts to draw out qualities of works of art that contemporary exhibitions may have missed. City Sculpture Projects illuminates the structures that sculpture had to move through to exist in the world. But to what extent can such an approach illuminate the sculpture itself? 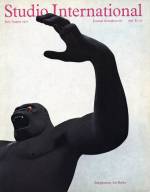 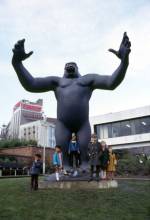 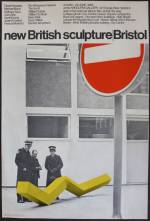 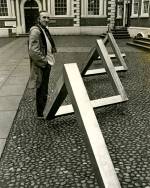 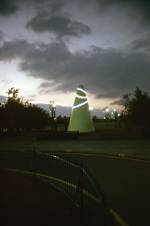 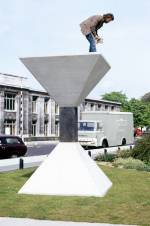 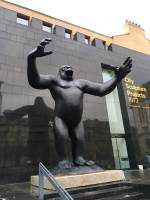