The late, much lamented Paris-based English sculptor Raymond Mason was an established raconteur. In 1954 Moore had invited him when in London to visit his studio. Moore had told Mason, patting the head a large reclining figure, “I am the one who invented the hole”. This may have been said partly in jest, but Mason said this was a remark worthy of Punch. He reminded himself, while doing his best not to denigrate Moore, that Archipenko, Zadkine and Brancusi had been there before. Mason had a tendency to get caught in the crossfire with a measure of canny innocence about him.1 On another occasion, Francis Bacon, within earshot of the British Council Paris representative, opined to Mason at a reception for Moore’s work, “Its so b-a-d: If ever I see his King and Queen once more, I’ll throw up”.2 Moore and Bacon did represent two diametrical approaches in their work.

The current Tate Britain exhibition does much to reposition Moore after the past two decades of equilibrium, on a rising trajectory again, and it must be said to be both a timely and valiant tribute. Most significantly it gives special prominence to the superb and evocative Shelter Drawings, a moving tribute by Moore to the trials and tribulations experienced by the London East End population during the Blitz. Moore had, by chance during an air raid, been trapped underground for a considerable period in the Tilbury tube tunnel, close to Dockland, and had the presence of mind to pull out his sketchbook and record the recumbent exhausted or sleeping figures en masse and individually or in groups as they lay in blankets along the tube tunnels. Moore listed the subjects drawn heads, bodies in silhouette, mostly reclining, many of whom were breathing with difficulty. Although the later German holocaust images had still not yet hit the world, Moore’s long serried lines of threatened, sheltering humanity have an equal impact, of man’s inhumanity to man.

A sound curatorial decision was taken by Tate Britain and the Henry Moore Foundation not to cover Moore’s work beyond the 1950s. The motivation was to reconnect Moore necessarily with the 1930s dynamism, of Surrealism, and artists such as Picasso and Brancusi. The touch of an English, palliative strain was often present in Moore’s work, in the immediate post-war years, although tougher images such as the Atom Head followed later on. This tendency to a softer content combined with a powerful materality still had to be played down in the wider world, if Moore was not ever to be deemed provincial, in the way that his contemporary Ben Nicolson was. At this point of reappraisal the Shelter Drawings raise a new significance to a key hardening in Moore’s approach, especially as kicked in by his own first war experience and now the Blitz. English art has always by tradition been haunted by the shadow of parochialism. Moore avoided this tipping point succinctly, but those responsible for maintaining his reputation including from post-war days the British Council, have to remain vigilant. Henry Moore was a great European sculptor, a master of materiality and form, as the sequence of reclining figures convincingly affirm, Even in the Shelter Drawings, the redemptive figure of the Unesco Reclining Figure can be traced in the blanket clad refugees. The world will still ask why the tortured figures developed by Francis Bacon, including such as the Pope paintings need no such fostering. By contrast they most truly represent the anxieties and distressed decadence of the post-war 20th century. 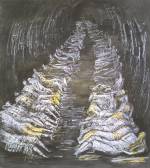