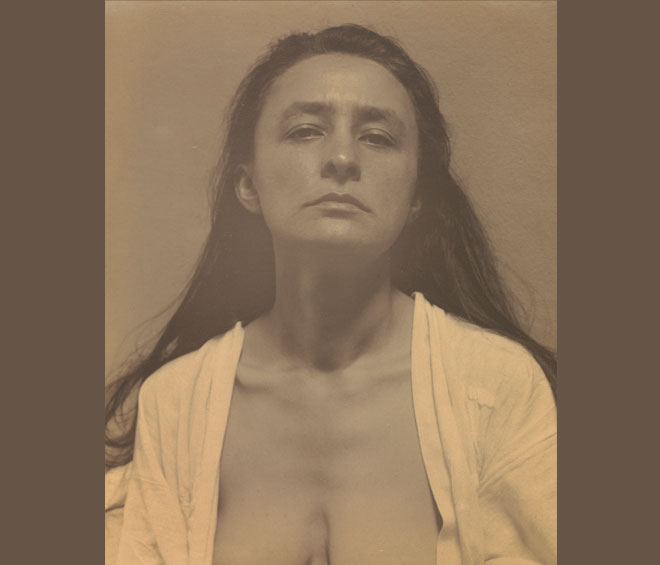 When one thinks of Georgia O’Keeffe (1887-1986), one inevitably pictures her enormous flower paintings, cropped close and magnified large, so that, as one might well think next, if familiar with the legend, that they look like female genitalia. Judy Chicago and Miriam Schapiro certainly perpetuated the idea of a “female iconography”, writing about O’Keeffe’s work in the 70s, but, already at the time, the photographer Alfred Stieglitz (1864-1946), also O’Keeffe’s husband, was propounding this interpretation, hinting at erotic content and offering psychoanalytic readings of her paintings. It is unavoidable, then, in writing about O’Keeffe, that the topic of female sexuality should be touched on, but it ought not to be dwelled on, since, take it or leave it as one possible interpretation of her work, it is but that. Certainly many of her paintings do evoke sexual imagery, but as Roxana Robinson points out in her biography of O’Keeffe: “The vulval imagery in O’Keeffe’s flowers […] is something for which botany should take the responsibility. Flowers do bear structural similarities to human reproductive organs, and this has more to do with the process of reproduction, both horticultural and human, than with the suppressed or expressed sexuality of an artist who paints the image of a flower.”1 O’Keeffe herself also always remained adamant: “When people read erotic symbols into my paintings, they’re really talking about their own affairs.” So, not only is this legend a myth, but there is so much more to her life’s work than just these particular paintings.

O’Keeffe was interested in form. The one consistent thing in her work – aside from her affinity with colour – is her preoccupation with shape and form. “It’s as if my mind creates shapes that I don’t know about,”2 she said. “The subject matter of a painting should never obscure its form and colour, which are its real thematic contents.”

The radical cropping, and the use of fore- and background, but less so of a middle-ground, is clearly influenced by photography – in particular the work of her friend Paul Strand (1890-1976) – but it is disingenuous to suggest that her painting is just like photography, or that photography captures the scenery better (as has been said about some of the works in this exhibition) – since her painterly quality, despite the flatness of the surface, creates a vast sense of space in the composition, reflecting the monumentality of the landscape and a true sense of the expansive horizon. Her landscapes pulsate and, unlike photography, which captures one decisive moment, they are living and breathing. The colours she chooses reflect the atmosphere of the place – particularly the heat of the New Mexico desert – and it is this affinity to a place, this experience of a landscape, that O’Keeffe paints best.

O’Keeffe was born on a farm in Wisconsin. Her studying and teaching took her to Chicago, New York, Texas and Virginia. In 1918, she moved to New York, where her debut exhibition had been held at Stieglitz’s gallery, 291, two years previously. In 1924, following his divorce, she married Stieglitz, and went on to split her year between the city and Lake George, where his family had a house. It was with the discovery of New Mexico, however, in 1929, that O’Keeffe finally found her place. “As soon as I saw it, that was my country,” she said.3 In 1940, she bought a house at Ghost Ranch and went on to split her years between here – and later the nearby small town of Abiquiú – and New York, until Stieglitz’s death in 1946, whereupon, after she finished settling his estate in 1949, she moved to New Mexico permanently.

Much is made in this exhibition of O’Keeffe’s relationship to Stieglitz. Certainly, their styles and work did cross-fertilise during their years together in New York, as, for example, can be seen in the coupling of her early cloud painting, A Celebration (1924), with his cloud photographs, called Equivalents. But the exhibition also contains a number of his nude photographs of O’Keeffe, which position her as the passive model, and I am doubtful as to how helpful or appropriate it is to give so much space to the man who, yes, may have given her her first exhibiting opportunities, but who equally is responsible for the myths about, and misinterpretations of, her work.

In a letter to a friend in the summer of 1929, O’Keeffe wrote: “I think I would never have minded Stieglitz being anything he happened to be if he hadn’t kept me so persistently off my track.”4 Moreover, in her 90s, O’Keeffe commanded a writer not to mention either her marriage or her husband in an essay on her work.5 Is it therefore correct that the first major exhibition of O’Keeffe’s work in the UK in 20 years – marking the centenary of her 1916 debut exhibition at 291 – should portray her as half of a co-dependent artistic duo? Of the 221 works in the show, from 71 lenders, only 115 are major O’Keeffes. The rest comprise works by Stieglitz, Strand, Ansel Adams (1902-84), and others – all men – from the sphere in which she was working. What male artist of this calibre would have nearly half the items in his major retrospective made up of works by women who had been working around him? O’Keeffe may have achieved the highest ever price at auction of any female artist (note: the highest price of any female artist, which, at $44,405,000 at Sotheby’s American Art sale on 20 November 2014, for Jimson Weed/White Flower No 1 (1932) – being shown here for the first time in the UK in more than 20 years – is still significantly lower than the $179.4m achieved by Picasso’s Les Femmes d’Alger (Version O, 1955) in May 2015 at Christie’s, but she is not in the Tate collection and it is hard to believe she would not have achieved significantly more success and recognition, had she been a man producing work of equal (or, indeed, lesser) strength.

When her works began to be talked about as capturing femininity in the 20s, O’Keeffe shifted her subject matter to the city and cubism. Despite New York typically being gendered as male, O’Keeffe embraced it, continuing her exploration of form. Even her more realist cityscapes are broken down geometrically. Influenced by Wassily Kandinsky’s book, Concerning the Spiritual in Art (1910), O’Keeffe was interested in both synaesthesia and chromesthesia – “the idea that music could be translated into something for the eye”. She often repeated Arthur Wesley Dow’s motto that the essence of composition was to “fill a space in a beautiful way”. After destroying much of her early work, she restricted herself to using only black and white chalks until she felt she could say no more without using colour. The first room showcases her earliest extant mature works, made while she was working as a teacher in Virginia and Texas, largely charcoals, before she returned to colour, noting: “I paint because colour is a significant language to me.”

O’Keeffe was a prolific hiker, and the landscape remained her most persistent source of inspiration. She is often described as the pioneer of American modernism – taking the genre out of the city and away from its east coast locus. She painted figurative works and abstractions, although it might be said that even the figurative works are, to some degree, abstracted. Her initial representational painting would be done from life, out in the open air, then she would take the canvas home to her studio and work over it so that it took on an emotional resonance – something she described as: “that memory or dream thing I do that for me comes nearer reality than my objective kind of work”.6 She painted on canvas with a very fine weave and coated it with a special primer to make the surface extremely smooth, blending one colour into the next, making sure that the brushstrokes were invisible. Her colours remain rich and bright to this day – O’Keeffe was a painter who knew what she was doing on every level.

In New Mexico, O’Keeffe was intrigued by the different cultural influences. Again, the churches offered her intriguing forms to work with and she described the Taos Mountains as “a beautiful shape”. In Black Cross with Stars and Blue (1929), the Penitente cross was, in reality, not set exactly against the mountain, but O’Keeffe painted it thus, composing the two images into one in her mind’s eye, creating a portrait – or experience – of a place. She reduced the world around her to essential lines, citing a calligraphic influence, having studied Japanese printmaking, and acknowledging an interest in Chinese paintings, which would manipulate scale and perspective according to decorative demands. She wrote of Ghost Ranch: “I wish you could see what I see out the windows – the earth pink, and yellow cliffs to the north – the full pale moon about to go down in an early morning lavender sky behind a very long beautiful tree-covered mesa to the west – pink and purple hills in front and the scrubby fine full green cedars – and a feeling of much space – It is a very beautiful world.”7 It is clear from her paintings that she saw nature with wide eyes – unfiltered – taking in its true colours – the pale, dry tones of the Ranchos Church, the earthy red of the rocks, the chromatic yellows and oranges, and the undisturbed blue of the vast sky – representing things not as we are taught to colour them as children, but as they are.

Her progressively abstracted series focusing on the The Black Place (soft mounds of deep-grey gypsum around 150 miles from Ghost Ranch) and the White Place (a 60m-year-old formation of white volcanic ash, eroded by wind and water) are two of her most expressive, composed from memory, but highly evocative of an emotional response to the New Mexico landscape she had fallen in love with. “Such a beautiful, untouched lonely-feeling place – part of what I call the Far Away,”8 she wrote. This loneliness, and the central fissure, appearing like a lightning bolt and ricocheting down the centre of the compositions, echoing the central cleft in her skull paintings as well as in her early pink and blue music and leaf paintings, speaks loud about the dichotomies with which O’Keeffe had to live: loving Stieglitz, but needing to be away from him; feeling lonely, but shunning company and seeking self-imposed solitude; splitting her time and location for much of her life; and, despite being such a strong character, struggling to live fully as her whole self. When she is still being described as “perhaps the most inspiring woman artist ever”9 and is being shown as dependent on and part of a larger, male-dominated artistic group, this is no wonder. O’Keeffe ought more properly to be described as “perhaps the most inspiring artist ever”. 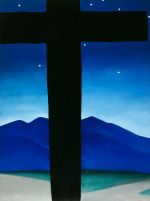 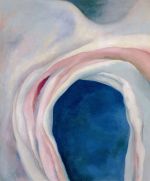