Georgia O’Keeffe (1887-1986) is one of America’s thumbtack artists, those whose posters are pinned to college dorm walls and whose work you will recognise even if standing on your head.

Well-schooled but, although said to have pioneered American Modernism, belonging to no school, immersed in the ideas formed around her, yet sui generis, O’Keeffe came to her technique early, stayed with it and perfected it through seven productive decades. Taken up by the photographer Alfred Stieglitz (one might say “discovered” but that the discovery was mutual – they lived together from the moment he took her out of Wisconsin, and were married soon after), she remains with us as vividly in his intimate portraits of her hands, belly and breasts as she does through her full-blown renderings of flowers, skulls, hills and canyons. Her profile, in particular, is as closely sculpted on our memory as those of Mount Rushmore.

Familiarity has bred content; the world of O’Keeffe is like a cup of warm tea. What then explains the tingling thrill of this show? On the surface, it is a scholarly overview of the formative body of work she undertook in upstate New York, comprising more than 200 paintings, pastels and sketches culled from private and museum collections across America. The exhibition was organised by the Hyde Collection in association with the Georgia O’Keeffe Foundation, and showed in both venues before travelling here. The casual viewer expected to be rewarded with joy: the thrill has been one of revelation. Portraits of the shimmering lake, anchoring rolling hills, jagged cliffs, knotted trees, bursting blooms, flamed leaves and shadowed barns disclose that O’Keeffe’s visceral involvement with nature and signature vocabulary of representative abstraction was formed not, as popularly held, in the New Mexico landscape that, freed to return to by Stieglitz’s death in 1946, she was most closely identified with, but during the long months between 1918 and 1934 that she had spent on the 36-acre Stieglitz family estate at Lake George.

A first look at these lush landscapes of the well-watered Adirondack’s longest days, wiped clean of steamboats and people, confirms an accustomed sense of order and calm and a quiet delight in well-handled form and design that is notched up several levels by vibrant colour and sure line. Now, read the captions and go back. The second run-through is the eye-opener. “Sometimes I want to tear it all to pieces – it’s all so perfect,” O’Keeffe wrote to her friend Sherwood Anderson about the mountains, lake, trees and superfluity of green. And tear it to pieces she did – rocks, bark, blossoms – ripping them out of context with bold washes of colour into a maturing vocabulary of erotic abstraction.

The still waters of O’Keeffe’s subtle artistry ran deeper than taught. Her mastery of watercolour (look in vain for a brushstroke) fed her sensuality. Flowers chic as a Dior dress read as vulva: a branch blown into a crevasse reads as intercourse. That the press, primed by Stieglitz’s intimate portraits of her, got it right away – “penile”, “ovoid”, “pelvic”, drove the glowing reviews – enraged her. It’s unlikely, however, that O’Keeffe was surprised; purportedly, Stieglitz had doubted she would “get away with anything like that – you aren’t planning to show them are you?” Her fascination with fauna bisexuality was avowed. Nor could her frontal treatment of petals, stamens and fissures have been naively subconscious. Rather, her resentment was kindled by the invasion of her privacy, much like when, as a nubile girl, she had blithely bathed topless on the beach, but felt violated by an accidental entry into her cabin as she was changing.

The eroticism of O’Keeffe’s early work is well known: what the Lake George paintings reveal is how it served her as process, as a way in to abstraction. Absorbing, then moving beyond the oblique projections of Japanese art, photography’s shallow depth of field and Mondrian’s spatial complexity, she engaged sexuality to bend nature to her purpose. Dissociating herself from the Hudson River School, she showed no interest in plein-air painting. Her Lake George was filtered though memory and the occasional photograph. Curvilinear lines stretched the placid mountains into long backs. Barn doors, bare walls and stone paths were fleshed into organic geometries. Night-for-day effects of misted twilight and dawn produced spatial ambiguity. The virginal pastels of spring morning, the clashing reds of late autumn, the deep purples and greens of that famed Jack-in-the Pulpit unleashed the power of colour. The lowering clouds that hung over the slumbering lake informed post-Monet water lily abstractions of white dots.

And all this 100 years ago. A full generation before abstract expressionism hit the world stage; decades before op art, and a century before the angled, twisted, vibrant landscapes that David Hockney wrested from decades of optical investigation with holograms, Xeroxes, camera obscura and iPhones, and that (wondrously for the student of art) just happened to precede this show. Astounding that, reviewing Modern Nature for the San Francisco Chronicle, Kenneth Baker called it “pleasing, but hardly stirring” and dismissed the curators for “playing it safe”. He must not have made that illuminating second run-through.

The moment you get it – this path into abstraction through fullness of form and saturation of colour – you understand the New Mexico material, not as the complete break from Stieglitz, his influence and sponsorship, as is generally understood, but as the ultimate step of a deliberate process. The petunias and hollyhocks O’Keeffe had carried in memory from Lake George served as just that – scorching memory. The bleaching of colour and stripping of cover mandated by the dessert’s desiccation; the parched cactus, porous animal bones – most notably her signature skull of a steer with twin dreamscapes of death-by-eternity telescoped through its eyeholes – gain new meaning if read as leached, over decades of living deep in nature, from the fullness of youth’s blossoming, as experienced at Lake George.

More than a postscript, the accompanying film of the artist in varying phases of observation and reflection is so compelling that, the day I was there, a four-year-old brought her teddy bear up to the screen to be kissed. 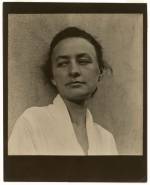 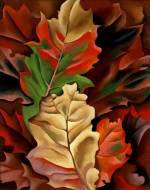 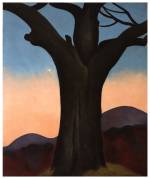 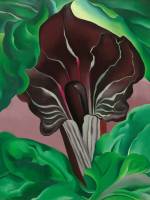 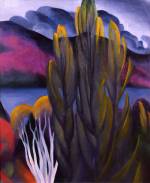