As the US charged headlong into the 20th century, as its cities grew skywards and consumerism began to bubble up like the champagne at Jay Gatsby’s parties, some of modernism’s biggest names stood back and took stock. And the world they depicted was a surprisingly silent one 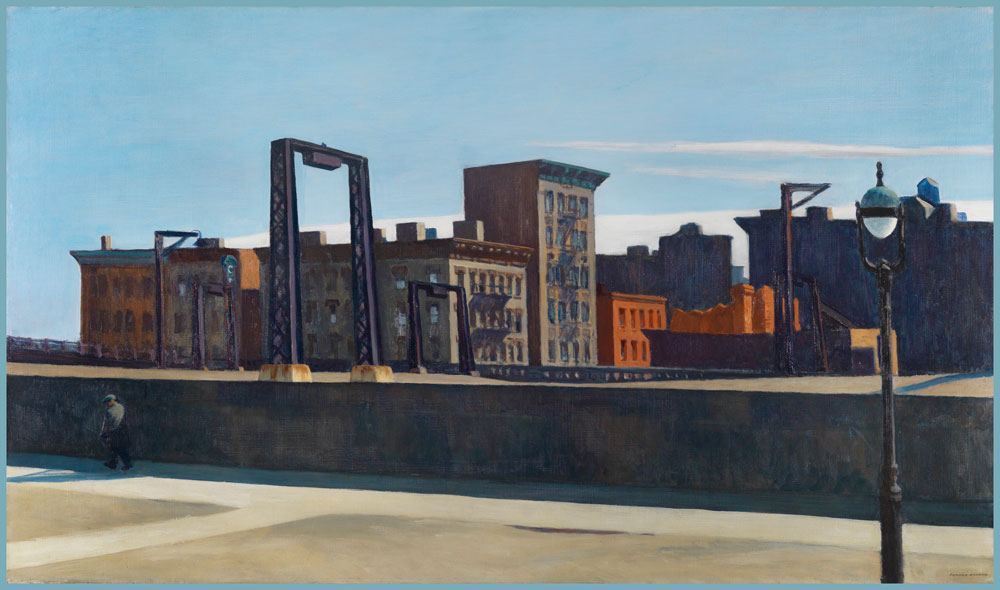 In the last room of America’s Cool Modernism, in a corner filled with the works of Edward Hopper, is an etching by an Australian-born artist called Martin Lewis. It would be easy to mistake the small print for one of Hopper’s – the mood is not dissimilar. A car, typical of the 1930s, pulls up at a T-junction on a cold, clear night. Its engine idles as the driver decides whether to turn left or right. The headlights illuminate the snow-covered telegraph pole in front of them, and behind that, in the darkness, sits a farmstead, with three invitingly lit windows. Above the scene, the Big Dipper (or the Plough, depending on which side of the Atlantic you hail from), points towards the horizon. The car is facing north and its occupants must decide whether to head east or west.

I keep returning to this image, not least because of the technical skill involved in such an intricate etching, but also because it is so evocative. We are told that Which Way? (1932) may be a metaphor for a country in crisis, reflecting the anxieties and confusion felt during the Great Depression. It is also a filmic snapshot of an untold story, and it fits in so well with Hopper’s images because it is also a lonely image, one of uneasy quietness and unanswered questions. This unassuming picture gets to the very heart of the US in the 20s and 30s as fortunes shifted and the identity of this powerhouse nation galvanised into that of a modern but troubled country, a country with many faces. But this exhibition starts with more tentative explorations, introducing us to an America in search, not of the answers to great socio-political questions, but one groping for an independent artistic voice, distinct from that of Europe.

The poet EE Cummings gets us started with an optimistic canvas of flat painted shapes, arranged like paper cut-outs, one of several similar images, which are playful but largely unoriginal. And there are names that are less familiar to audiences east of the Atlantic. Here, we are introduced to Helen Torr. Her work was exhibited at an all-female show organised by Georgia O’Keeffe in 1927 and the two were friends, but Torr’s was a much earthier palette. Houses on a Barge (1929) has a folksy, naive feel to it. It is a dreamlike, surreal image of precariously balanced buildings lined up on what looks like a biblical arc. The sky is orange and grey – there is no hint of blue – and even the water is brown. While O’Keeffe’s paintings are all lightness, with colours seemingly transposed from air, Torr’s are firmly earth-bound.

The room that bridges these tentative steps towards a distinctive painting and the all-American figurative work of Hopper focuses on the cityscape. This was the preferred domain of the precisionists, whose tightly painted factories – while speaking to an industrial boom – are eerily devoid of people. The attitude of these artists to the changing times is ambiguous. Charles Sheeler’s images of modernity are all sterile, concrete edges. Water (1945) represents not a single drop of the eponymous substance, but instead celebrates man’s ability to contain nature on an industrial scale. Squint and it could almost be a cubist image, such is the flatness of neatly painted structure. 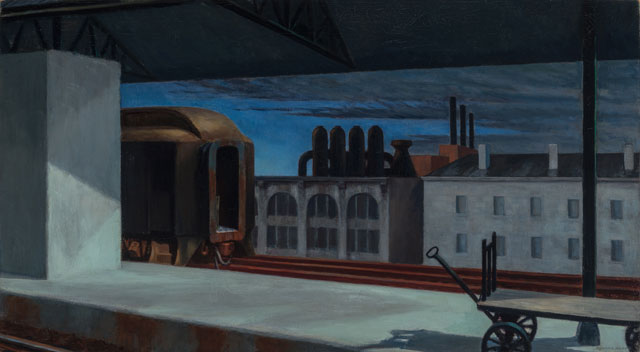 George Ault’s paintings are more atmospheric in their detailing of the urban.  New York Night No 2 (1921) is a foggy street with a non-descript commercial building and a sign that is black and illegible. This is an anonymous street – it could be almost anywhere – and, again, there is not a soul in sight. Only a couple of illuminated windows hint at life, which serves to intensify the loneliness we feel from our empty, street-bound perspective. Hoboken Factory (1932) has the same feeling to it, illuminated and billowing black smoke into the darkening sky, but devoid of human life. It is as though modernity has swallowed all of the people, as if humanity has been subsumed by industry. These buildings might have sprung up spontaneously, such is their disconnectedness from the hubbub of daily life.

But it is not all pseudo dystopian gloom. In Charles Demuth’s I Saw the Figure 5 in Gold (1928), there is a glimpse of the energy and colour we associate with the more glamorous side of the era. Demuth was inspired by his friend William Carlos Williamson’s poem The Great Figure, which was written about a speeding fire truck on the streets of Manhattan. The painting is almost a freeze frame of a filmic montage of street signs and windows. The number five seems to rush towards us, the solid streams of light a nod to futurism. You can almost hear the clanging bells as the engine roars past. This is the charge of progress, of urban living, of hustle and bustle and shiny excitement. It is also a glimpse of the aesthetic future – a precursor to pop art.

There are interiors here, too. Jacob Lawrence, who was the first black artist to be represented in a New York Gallery, painted a series of 60 small images with captions that charted the migration of African Americans from the rural south to the urban north. Two are on display here. One, a series of simply painted windows in Harlem, where his family settled in 1930, the other an empty room with a bare wooden floor that lists unnaturally upwards. It is a painting of muddled perspectives, disorienting and stark, as though the world has shifted and everything seems off balance. 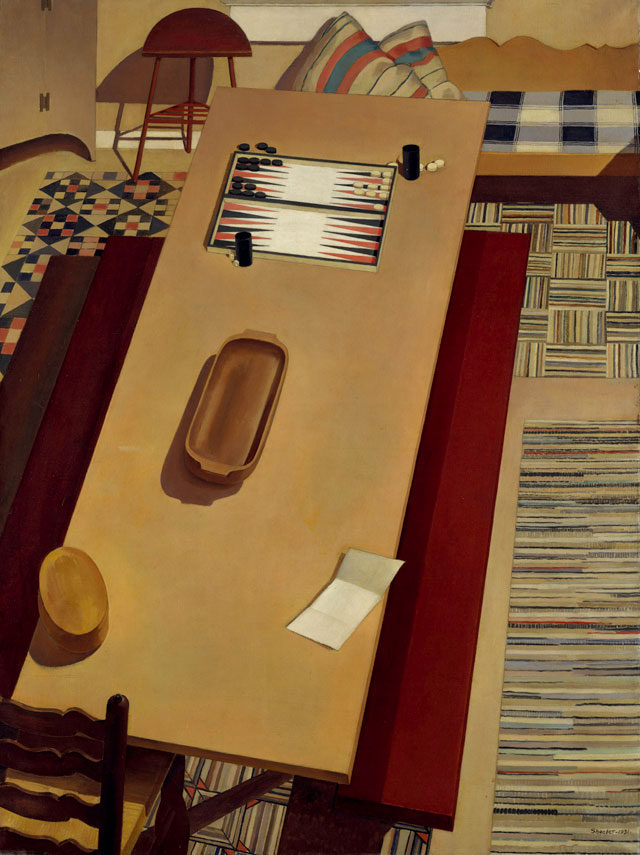 Another oddly angled interior, Sheeler’s Americana (1931), celebrates simple craftsmanship and homely comforts, but is also empty of figures. A game is in progress, but the players are absent, and a folded piece of paper that sits on the edge of a table is blank. Is this just an exercise in patterns and polished edges, or is it a painting about something more, an exploration of a modern American identity, perhaps? For all its realism and warm tones, it shares Lawrence’s tilted Cézanne-like perspective and uneasy emptiness.

This room brings us to Hopper, the artist who defined an era of American cityscapes. While ambiguity and ambivalence permeate many of the works on display here, we are left in no doubt as to Hopper’s feelings. His buildings are not cold and smooth, but textured and drenched in soft light. They are characters that dwarf the human figures, those quiet isolated souls who stare into their coffee cups or down at their feet. Hopper paints light and silence, isolation and reflection. And, although it wouldn’t have had quite the same pull, this exhibition could just as easily have been called America’s Quiet Modernism. 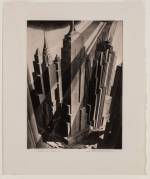