Greek artist Sofia Stevi’s paintings ooze confidence, sensuality and an improvisational spontaneity. Yet her flair and inventiveness with a paintbrush are something of a recent discovery – to Stevi as well as to the rest of us 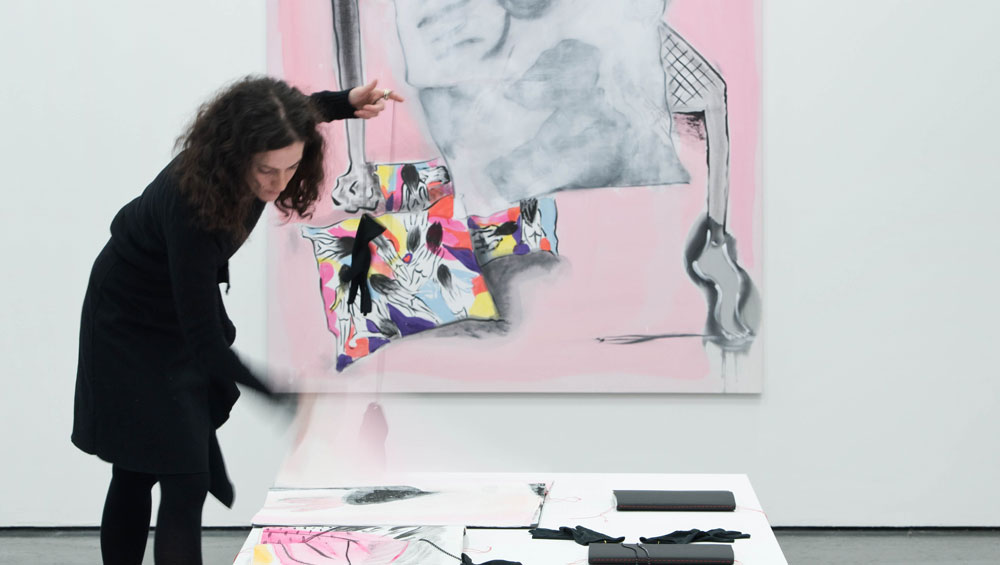 Sofia Stevi was born in Athens in 1982 and studied at the Vakalo School of Art and Design in Athens and Central Saint Martins in London. She studied graphic design and then bookbinding before – seemingly by accident – she realised quite how satisfying painting directly on to untreated cotton can be. Just a small sample of the exuberant outpouring of work that has followed on from that first experiment, in 2014, is now splashed across the large ground-floor gallery of Newcastle’s Baltic Centre for Contemporary Art, in what is Stevi’s first solo presentation in a public gallery; her first solo show was just over a year ago, in Athens, at The Breeder Gallery, which represents her. She is also represented by Alma Zevi in Venice and in Celerina, Switzerland. 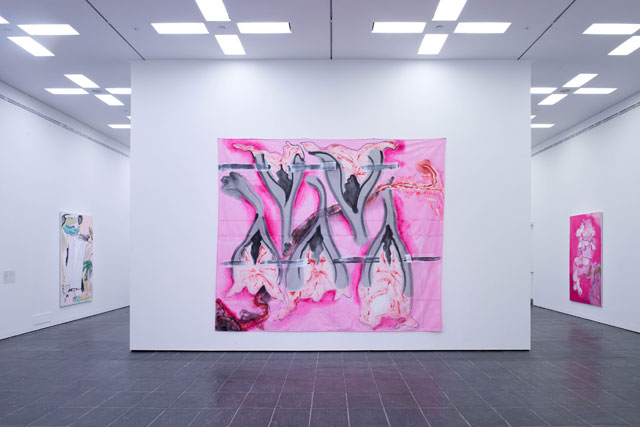 Sofia Stevi. Are We Ever Really In Control?, 2017, installation view, turning forty winks into a decade, Baltic Centre for Contemporary Art, 2017.

Voluptuous and fleshy forms are conjured by her black, fluid, occasionally cartoonish lines – she uses Japanese ink for extra intensity - dancing across big, untreated cotton expanses, in surreal landscapes of fleshy or neon pinks and greys. At the entrance to the exhibition, we are greeted by the pulsing pink of Are we ever really in control? (2017). Inspired by a close encounter with some fish, these soft-fleshed creatures march rhythmically across the fabric. Against a neon pink background, their cavities and corpses suggest things sexual and botanical, more than piscine, with a strong nod to Georgia O’Keeffe’s sensuous floral compositions. 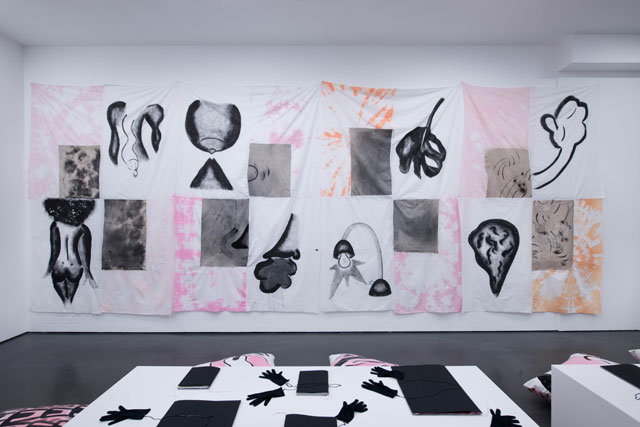 The untreated, loosely hung cotton on which she usually paints adds to the sense of vigour and informality. She is said to take no more than a day to create her works, and this performative aspect gives them a real freshness and immediacy. Her skill as a graphic designer is evident in the intense character and energy of every line, squiggle or flick, mining her scenarios (inspired by poetry, people, situations and the surreal landscapes and juxtapositions of her dreams) for both comedy and empathy.

Dinner in vienna I (2016) was triggered by an actual meal, although here it has been leached of all its colour. And yet, the comical exuberance of its components transcends the dull palette of grey, black and white: a fiercely phallic Viennese sausage looms off the plate, while vaguely testicular onions nestle near its base surrounded by tiny white squirls, which could be grated parmesan, or could be pubic hair; Stevi likes to keep us guessing. Wherever you look, there are strange “willy/boob” appendages (according to my Baltic Crew guide, this combination arose when her mother idly remarked that some of the boobs she painted looked more like willies, an ambiguity she has clearly embraced).

The surreal sensualities of Stevi’s work are mostly funny and friendly, and only occasionally disturbing. She likes to play with expectations, as well as perspectives. The lake (2017) is a work dominated by rudimentary layers of grey, rippling water. What is interesting is that ragged white “holes” have been torn from its liquid surface, while flames flicker – perversely - downward from the top right-hand corner.

True to the impulsive nature demonstrated by these rapid-fire works, she is open to the disposable allure of social media, sometimes using images she finds on Instagram for her compositions. Just like honey (2016) was inspired by an Instagrammed photo of a hand wearing a ring. But she has chosen to disrupt the sense of self-glorification and status that the original Instagrammer must have intended: the hand dangles limply; an explosion (fart or ejaculation, who can say?) appears to have caused puffs and smears of honey-coloured stuff to erupt from either side of it, while three glittering rings emanate, in plump, fleshy sacks, from its forefinger. 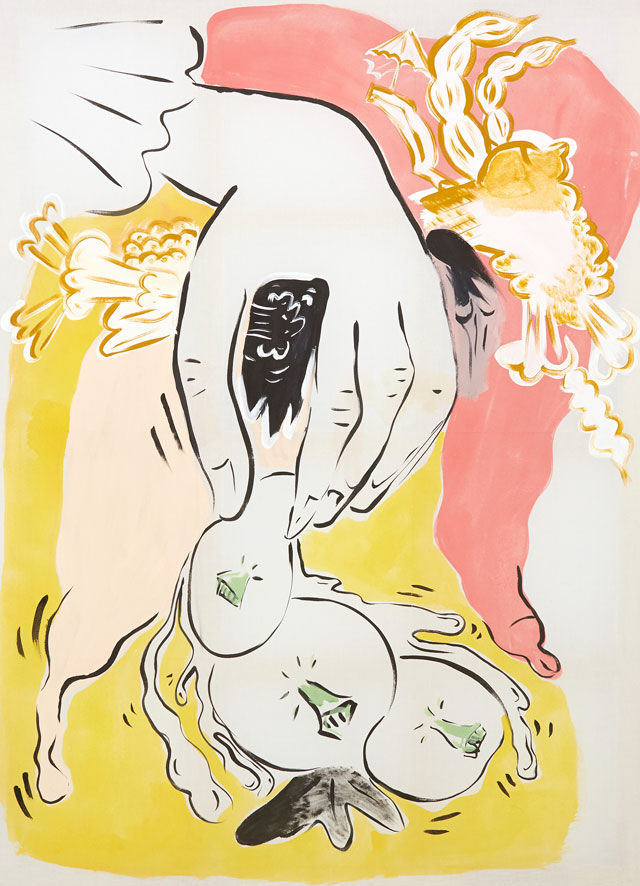 “The work is very much about her experience as a woman,” says curator Emma Dean. “It’s about her positioning of herself in the world in that way – the good and the bad, both familial relationships and romantic.”

Louise Bourgeois is an inspiration, says Dean, and you can see that in the graphic, interrogative, quality of her work, as well as the use of textiles, although the women in Stevi’s family have a long history of textile artistry, too.

To the rear of this gallery is the largest and titular piece, Turning forty winks into a decade (2017), which delves deep into her own dreamscapes. Created in two huge fabric squares, two characters sit at a table to the right, on chairs with webbed, duck-like feet. The eyes are drawn to one character’s chest, which is adorned with a whole cluster of fleshy boob/willy appendages. But the diptych is dominated by a large, organic, sprawling cell shape on the left, its inflated, microscopic form seemingly about to engulf the aforementioned table and its occupants, in a classic surrealist reversal of real-world perspectives. This piece lurches from the illustrative to the expressionistic in a manner both compelling and vertigo-inducing. 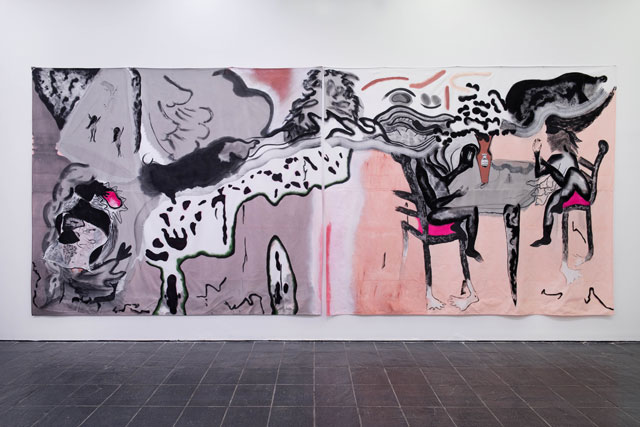 On the facing, dividing wall, Stevi has pinned up a number of loose works, in what she calls a “collage” arrangement, which emphasises their improvisatory qualities. Some of them, such as A burning sensation (2015), seem like little more than doodles, while others transcend their cursory, cartoonish components to conjure entire universes. Proud male figure (2016), for example, summons a pumped-up male chest evoked with just a gesture in pink, along with one toned arm and a bulging shoulder, while a thick aura of dashes articulates his radiant self-satisfaction. Even better is My non-purity as a white flag (2016), where disembodied fleshy, female body parts – a leg, nipple, boobs – are reduced to their essential, dancing elements, choreographed with all the vivacity of a Matisse cutout. 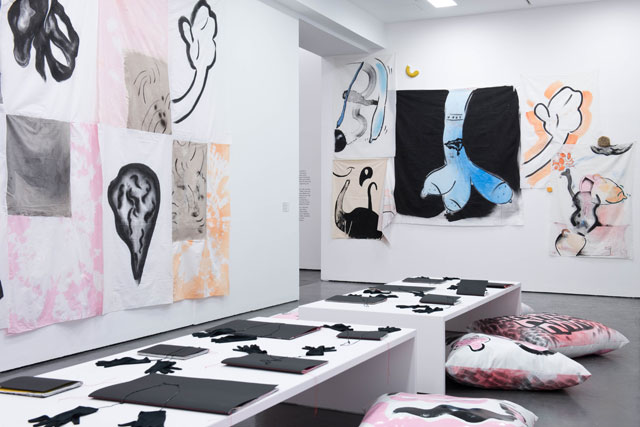 
Interspersed among this collaged cotton, Stevi has added cast versions of objects she likes. For example, in Hormonal (2016), above the writhing, puckered forms, she has placed a yellow cast of what could be pasta, could be wire cables, coiling tightly with an energy that echoes the contortions in the painting. It would be interesting to see her expand her rich vocabulary of material/poetic associations in more ambitious multimedia installations.

There is an interesting dialogue in Stevi’s work between resolved and unresolved, which is emphasised by having some of her works stretched on to frames. Dean agrees: “The stretched work does seem resolved, and maybe that’s purely about their presentation.”

But rather than move further in that direction - towards a more orthodox, painterly presentation - Dean feels that Stevi is going the opposite way, towards immersive installations. “The layering of unstretched works is pushing her more in that way, her paintings become more like murals.” 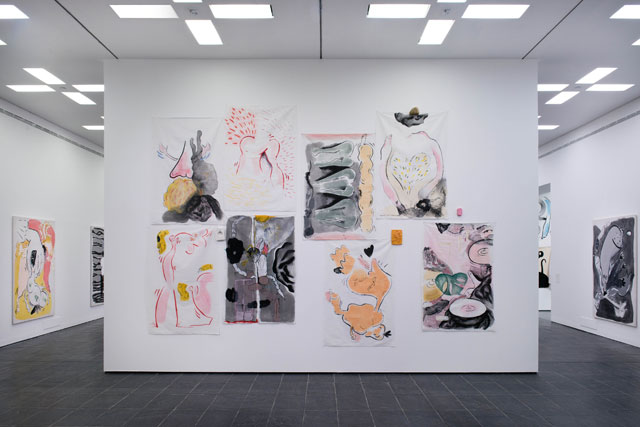 This immersive sensibility is very much present in the adjacent room, which Stevi has unofficially dubbed an “archive”. Here she has splashed her favourite graphic motifs on collaged paintings across two walls, and on to cushions, which are strewn around two low, white tables; she has daubed the cushions with gloss paint, which gleams with a sweaty, plastic sheen, adding to the cushions’ tactility. On top of the tables, Stevi has placed a number of stitched fabric “books” of her sliced-up works, adding to each a pair of black “archivist” gloves.

“This studio space is conceived almost as a Japanese tea ceremony,” says Dean. “There is a ritualistic opening of the books using the gloves. We wanted to give room for the books to have weight. They are an archive of past work. She has chopped up past paintings and bound them together. Cutting up a painting is quite violent – it’s a deliberate, strong act, which really intrigued me.” By this act, and this installation, Stevi plays with the usual pomp and formality around questions of what is art, what is an artist and what you are allowed to do with an artwork. 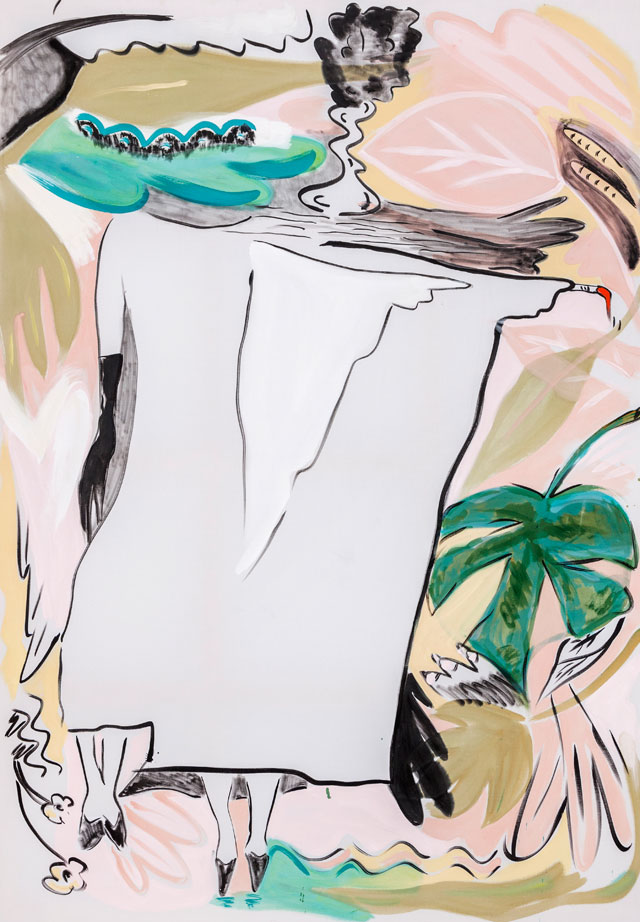 Her intentions for the room are perhaps stated most clearly by the placement of her work Set for play II (2017), on the far wall, at the head of the table. It has gone down especially well with visitors, says Dean. “People are really enjoying being able to interact; in the museum and gallery world you can’t touch anything, you aren’t supposed to sit on things. Here, you become part of the installation.”

Stevi would be pleased to hear it. A natural collaborator, she has founded both a poetry publishing house, Friary Road House, in London, and an artist-run space, Fokidos, in Athens, where she curates and hosts exhibitions and residencies encouraging other artists. But judging by the fertile ideas and vitality expressed in her work at the Baltic, she is clearly as happy in the spotlight as she is directing it. I suspect the spotlight is something she will have to get used to a whole lot more of. 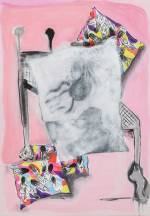 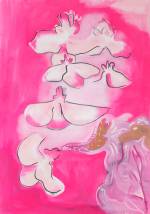 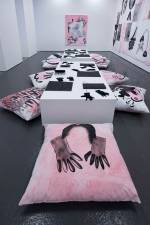