Beginning in 1918, Georgia O’Keeffe spent part of each year until the early 30s at photographer Alfred Stieglitz’s 36-acre family home located on the western shore of Lake George in the Adirondack Mountains. Two years earlier, when these two 20th-century masters met, O’Keeffe was a mere 28 years old and just starting out, while Stieglitz, at 52, was at the height of his career. By 1924, they were married, with Lake George Village serving as a backdrop to their lives and her art. Organised by the Hyde Collection, located in nearby Glens Falls, New York, Modern Nature: Georgia O’Keeffe and Lake George gathers about a quarter of the more than 200 paintings, sketches and pastels she made there to demonstrate how the landscape and architecture of the region reverberates in her later work. 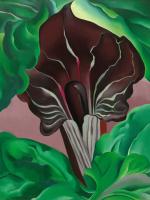