Costume is usually viewed through a frame of fashion: a piece of clothing is set against its context in chronology, trend and social ambience under normal circumstances of speculation. The Cooper-Hewitt National Design Museum breaks that pattern, however, and arranges its exhibition of haute couture by displaying them according to their colour, disregarding all other contextual definitions in an exhibition of clothes that span centuries and styles of designers, such as Balenciaga, Chanel, Vionnet, Dior, Gaultier, Galliano and various royal couturiers.

Like a child in her or his mother’s wardrobe, the exhibition pulls out the clothes and rearranges them for an innocent, curious gaze, untainted by the decrees of social convention. It sees clothes without fashion, singularly and without distractions, and, therefore, shows with clarity what it is about clothes that preoccupies and affects people.

Fashion may influence people in the wearing of clothes but, more often than not, other characteristics inform choice. Fashion is cyclical and simply presents the same tricks under new guises that subtly change in connotation as years pass. But the tricks remain the same. People have always commented, with a weary sigh or magical intoxication, that the fashion world, and the high society it dresses, is a circus. And so it is: fashion, its designers and socialites are the clowns - things such as colour, line and texture remain the tricks with which they play.

As with all major areas of design, colour is intrinsic in the creation of something beautiful and, as this exhibition reveals, functionary.

Where a building houses people and a teapot pours tea, clothes assist in the most theatrical, entertaining and often devious human preoccupations. Their function is often seduction, deceit, allure, and camouflage. Colours express character and mood. And that is why fashion is so transient: 'Women are as fickle as running water', according to Verdi’s Rigoletto. Clothes are an opera of dramatic colour and fabrication; they clothe fickle characters who change their dress, and thus fashion, according to whim.

These clothes, and their colours, are the reflections of a rainbow in running water; the colours of a person, most often a woman, whose song is inspired from the rainbows of tears, the reflections caught and expressed in dress.

The curators at Cooper-Hewitt, in dividing clothes by colour, examine the human emotions they represent. They reveal obvious parallels between, for example, seduction and the colour red, placidity and blue, and display them in rooms lit accordingly. But these clear assumptions take a new intensity, and the extent to which the colour one dresses in influences subconscious social perception is suddenly fascinating.

The insightful curators at Cooper-Hewitt show that clothes are not simply wings for social butterflies, but part of the great opera of high society, where the rainbows inspired by tears of despair and joy pigment the costumes and play along with the song. They reveal clothes to be part of art, and celebrate that beauty of which they are part. 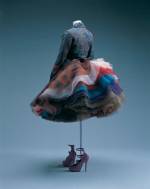 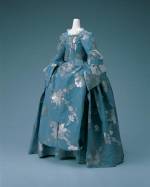 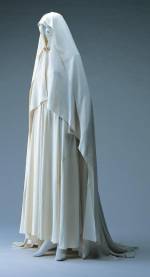