Eva Langret: ‘As more and more exhibitions are produced in Africa, by African curators, the need for the rest of the world to “get it right” will become redundant’

Eva Langret: ‘As more and more exhibitions are produced in Africa, by African curators, the need for the rest of the world to “get it right” will become redundant’

Eva Langret, head of exhibitions for London’s Tiwani Contemporary gallery, discusses the current surge of interest in Africa’s contemporary artists and calls for an end to reductive, pan-African exhibition frameworks and more recognition of the individual artist

Tiwani Contemporary was founded in 2011 to represent international emerging and established artists, focusing on Africa and its diaspora. In addition to its commercial activities, the gallery runs a public programme, Art Connect, supported by the AG Leventis Foundation, to provide a platform for discussing contemporary artistic practice.

Veronica Simpson: There is a real wave of interest in African contemporary art at the moment. What do you think have been the key drivers for this?

Eva Langret: It’s a combination of factors. First, there’s the globalisation of the art world and the growing interest in global perspectives on contemporary art - for once. Favourable economic conditions in several African nations and the development of an infrastructure for producing and exhibiting contemporary art across the continent has made a difference, with art centres (such as the Centre for Contemporary Art in Lagos), biennales (in Bamako and Dakar, for instance), publications, artists’ collectives and associations, festivals, fairs and soon a new museum of contemporary art (Zeitz Museum of Contemporary Art Africa in Cape Town). But it’s also thanks to the work of a number of historians, researchers and curators, who have been tirelessly creating platforms to discuss and showcase artistic practices from the continent.

Another factor is the growing interest of a number of museums and institutions in the west, with exhibitions such as Ibrahim El-Salahi at Tate Modern, Pascale Marthine Tayou at the Serpentine Gallery and Figures & Fictions at the Victoria and Albert Museum.

And in the midst of all this is the recognition, at last, of some of the continent’s most established artists, who are finally given due credit for their contribution to the art world.

But it is a common misconception that contemporary art from Africa is new, emerging. It is not. What is new is the relatively recent interest it has gained in Europe, within wider audiences. There is a well-documented, but often overlooked, history of exchange and influences between European, American and African artists that spans much of 20th-century art history.

VS: I recently visited the Vitra Design Museum’s exhibition, Making Africa: a Continent of Contemporary Design, at the Guggenheim Bilbao. One of the problems, for me, of this exhibition is that it devotes a lot of time and space to clarifying or exploring how the west views Africa, and vice versa, when it could have found more useful thematic devices for simply celebrating the work.

EL: There is a fraught history of exhibiting art from Africa in the west, and, still today, too many exhibitions are underpinned by barely concealed essentialist tendencies – the main argument being that an artist is worthy of attention because they come from such-and-such a place, as opposed to the ideas they engage with in their work. As much as I commend every initiative that brings to the table anyone who is not white, the monolithic approach of these projects can be problematic in some cases. It creates superficial platforms with perverse side-effects for artists: they are damned if they partake and they are damned if they don’t. European artists do not have to deal with this – it’s a given that their work is rewarded on intellectual merit.  That’s why it is difficult for an exhibition today to just “celebrate the work” as you mention – because so many exhibitions, to this day, have precisely not “just celebrated the work”, and instead created alienating frameworks that artists are still fighting against.

Then there is the question of expertise. On the one hand, we have a number of extremely knowledgable experts – many of whom are operating on the continent but also internationally. On the other hand, we have self-appointed saviour-curators, who attempt to tackle the artistic production at the scale of an entire continent with only limited research, with the view to curate a definitive exhibitions on what African art is and what it isn’t. This is bound to create some tensions and a gap between what is going on locally, and the discourse that is produced there, and the exhibitions we see in Europe. I say this working for a London-based gallery that focuses on artists from Africa, so I’m aware of my role in this process. I think the solution is self-determination in curatorial practices: as more and more exhibitions are produced in Africa, by African curators, the need for the rest of the world to “get it right” will become redundant. But until we get there, there is still work to do.

VS: Nigeria seems to have an incredibly strong presence globally across the visual arts. Is the strength of its economy a major factor here?

EL: The growth of a local market for contemporary art in Nigeria is due to the strength of its economy, and the advent of a local collectors’ base, but there was a vibrant and long-established history of Nigerian contemporary art prior to this. This history is rooted in movements such as natural synthesis and the legacy of Zaria Art School, but also Yaba School, Nsukka School and with leading figures such as Aina Onabolu, Yusuf Grillo, Ben Enwonwu, Uche Okeke or Bruce Onobrakpeya. Now there is a new generation of artists emerging, many of whom we work with at the gallery: ruby onyinyechi amanze, Abraham Oghobase and Andrew Esiebo and many, many more.

VS: Which other regions do you feel are producing particularly interesting work?

EL: It’s difficult to think about some regions being more interesting than others – our approach is individualist - but some regions may benefit from specific conditions that can be conducive to a healthy contemporary art scene, and the art educational system is often its spinal cord. We’ve started working with several artists from Angola this year – Délio Jasse and Francisco Vidal, who both feed a great deal on the recent phenomenal changes in Luanda. We also work with two artists from Zimbabwe, both of whom studied and worked in Harare at the same time: Gareth Nyandoro and Virginia Chihota. They have greatly benefited from rigorous artistic training in Zimbabwe, which has definitely influenced their practices.

VS: What role do you feel that really high-profile curators – such as Okwui Enwezor, who advised on the Making Africa show - have played in driving this new wave of interest in African art?

EL: A huge role: if it was not for the pioneering work of people such as Enwezor, Bisi Silva, Simon Njami and Koyo Kouoh, many of the artists now exhibiting on an international platform might not have had that opportunity. There is also a new generation of young writers and curators – many of whom have contributed to our programme at the gallery - who are expanding the conversation in new, exciting directions: Zoe Whitley, Osei Bonsu, Christine Eyene, Julia Grosse, Yvette Mutumba, Elvira Dyangani Ose, Yasmina Reggad, Louisa Babari, Pascale Obolo, Élise Atangana, Yves Chatap … I’m forgetting a million people, but what is exciting is this plurality of perspectives. There are more and more critical voices in the field, and that is a healthy development.

VS: In Making Africa, the resourcefulness in the use of materials – all materials, including those normally regarded as refuse and waste – was exhilarating, especially from a design and architectural perspective. Yet Enwezor makes it very clear that he wants to move on from this story of waste and recycling.

EL: That’s another European obsession with African art: the recycling trope, the artist-maker-designer. I think there’s been a disproportionate representation of such practices in European exhibitions. As much as it is true to say that boundaries between art, craft and design are much more fluid in Africa (and I can see much potential in extending this idea to the fields of design and architecture here), I think this trope plays into the stereotype of the self-taught artist who has a quasi-mystical connection with materials. It disturbs me. At the gallery, we are interested in supporting other ideas.

VS: Would you say that the work emerging from Africa now, as the market takes off, is perhaps fresher, thanks to having flourished for decades outside the toxic atmosphere of art-world hype and inflationary pricing?

EL: If anything, we’re right in the middle of the hype. I find that the market is taking on a disproportionate role in the African art scene, with galleries and auction-type exhibitions proliferating at quite a fast pace compared with non-commercial forums. That’s a worry. We cannot let the market be the main force shaping the scene, and more critical, non-commercial forums are actively needed.

VS: With more major exhibitions focusing on art from Africa looming, such as the Armory Show’s Focus in New York (3-6 March 2016), how would you like to see the curatorial or critical approach evolve in the next 12 months?

EL: I’d like to see more international exhibitions including artists from Africa without necessarily having to be about Africa or African art. We need more global exhibitions that tie meaningful, conceptual links between the artistic production in Africa and elsewhere. More south-to-south exhibitions would be interesting, without always having to involve European or American partners.

VS: In terms of Tiwani Contemporary’s own programme, what exhibitions, artists and events are you hoping will evolve the conversations around art from Africa and its diaspora in 2016?

EL: The gallery is growing fast and several new artists have joined our books in the past few months, so 2016 will be mostly dedicated to them, with first UK solo exhibitions for Robel Temesgen, Gareth Nyandoro, Pamela Phatsimo Sunstrum and Dawit L Petros in the first half of the year. And we will continue to run our public programme of talks and publications that provide much needed context and critical thinking for the work that we and our artists do. 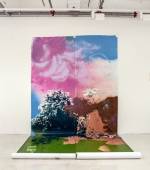