Lisa Corinne Davis talks to Lilly Wei about her multilayered, map-like paintings, the complex relationship between race, culture and history, and her hope that her work will challenge preconceived notions of identity

Lisa Corinne Davis is a New York-based artist best known for paintings and works on paper that resemble multilayered maps with encoded narratives. Her “inventive geography” prompts a wide range of interpretations, its open-endedness a stance she actively cultivates. Her work derives from autobiographical sources but also refers to social and cultural issues, both historical and contemporary. The resultant mix of eclectic form and content is surprising as well as stimulating. Davis, who is African American, says her practice explores the complex relationship between “race, culture and history” and, with it, ideas about classification and contingency, the rational and irrational, chaos and order.

Her painting has become increasingly responsive to the processes of paint and its materiality, the colours richer and more nuanced, her depicted “environments” not quite natural, but also not digital. Viewers have difficulty in determining whether Davis’s constructions are handmade or not, real or fictive spaces, figurative or abstract, microcosm or macrocosm. Davis, who has taught at Yale University School of Art and is currently a professor at Hunter College, the City University of New York, has exhibited regularly since the 80s, mostly in the US, her works found in many public and private collections. Her latest exhibition is at Galerie Gris in Hudson, New York.

Davis talked to Lilly Wei about her recent work and the personal reflections that have shaped it.

Lilly Wei: Do you think it’s true that African-American artists have usually been expected to deal with race in their works instead of their individual identity and passions?

Lisa Corinne Davis: It is certainly something I have thought about. I feel that I’ve always been implicated in whatever people around me understood African-American culture to be. I wasn’t trying to make a statement about being black, or about race relations. It was more a personal search to figure out what the importance of race was and what constituted notions of race for me. When asked, when I said that I was African American, I saw that a whole set of assumptions about my identity and history came with my response – even if none of it applied to me. It made me think about the fluidity of culture and one’s location within it as an individual. Mapping was a metaphor for that.

In my earlier works, I often used things such as art-historical artefacts that were clearly culturally oriented. It was a desire for security because it made things simple, not because it had anything to do with my background. I realised that people who asked me about my race brought their own perspectives, biases and knowledge with them, and these attitudes were integral to the relationship between us. I think when people look at abstract painting, the approach is parallel; a set of assumptions determine what they see or don’t see, what they want to see and don’t want to see, whether what they see is rational or crazy. I play with the unfixed nature of what one brings to a painting and how that shifts over time, changing how you connect to it.

LW: Do you think that preconceived notions of race and identity cling more closely to African-American artists?

LCD: I realised that preconceived notions are pervasive. When we go on the internet, say, we go with a question – we have a notion of something, but this becomes more complicated since nothing is fixed. Everything’s contingent and I’m interested in having a dialogue about flexibility, about contingency and duration.

LW: Does this relate to today’s sense of multi-consciousness, of multiple personas instead of a fixed identity? Is it part of a post-racial conversation?

LCD: Yes, neither race nor gender is fixed and notions of hybridity prevail. Perhaps a painting shouldn’t be called a painting either. I don’t want it to be fixed, to be only one thing.

LW: Do you think categories are necessary?

LCD: There is in postmodernism and its open-endedness something that makes us want more categories, whether racial or national, social, geographical or gender, but it’s complex, filtered through a personal assessment since there isn’t a common culture any more, at least in the industrialised west.

LW: So the increasing abstraction in your work is part of this fluidity?

LCD: Yes, it is an opening up. I’m letting the paint do more of the work, as a way to keep it fluid. And instead of walking up to the work and saying, it’s a map, it’s much more interesting to say, what is this?

LW: Would you talk about the imagery in your painting?

LCD: At first they were drawings of myself covered in black graphite with coloured pencil drawings on top. Then they became more archaeological, like objects sitting on a wall, but they were still about images of me and the iconography of a culture. I was trying to relate to straightforward, representational objects, but I slowly shifted to more and more abstract work to be more expansive, navigating between what was rational and irrational, trustworthy and untrustworthy.

LW: It interests me that you frame process in those terms, that you personify it.

LCD: The reason we want to categorise people and put certain labels on them is because it gives us a secure and rational way to deal with them. It’s not very realistic, but we trust categories when it comes to dealing with people and it keeps things ordered. It scares people when that order is disrupted and becomes individualised. They don’t know what to do with that information. In the language of art, we have certain kinds of mark-making and forms that we trust because they are less flexible as far as interpretation is concerned. For example, a ruled line, a grid, is clean, hard-edged: we trust it as a kind of measuring device that we don’t have doubts about. It goes into a category. A line, a mark, that isn’t hard-edged, that comes from a bodily movement such as a gesture, is personalised: it’s a felt, psychological experience. The line and mark represent two kinds of abstract language – the outward, the mathematical, which is geometric abstraction, and the inward, which is abstract expressionism.

LW: How do you use that language?

LCD: I want to fuse them so they are a hybrid in which truth and fiction can’t be separated, so that it’s a less secure narrative moving away from categorisation and things we trust as facts. I play with that as line, as shape, as border, and then as gesture, movement, colour, point of view and spatial relationships. I try never to let any of them stay in a single place. I want to force them to fall apart or go into another reading, into the viewer’s own interpretation.

LW: Would you discuss one work specifically, maybe Capricious Circuitry (2014)?

LCD: The orange shapes you see on the surface were made by spilling ink on to paper. I then cut out the paper and traced the spill on to the painting. It’s still a map, but more complicated. You are aware that the orange patterns originated in a human gesture but they have been routed through a mapping technique.

LW: And why do you prefer to mediate the spill?

LCD: I really believe that how a painting is made should be revealed to the viewer, so it’s just another translation. If I did it directly on to the painting, that would relate directly to the action of the spill. But by spilling in on to the paper and cutting it out and tracing it, I’ve moved you another step away from the initial, human gesture. The stencil refers to that spill, but isn’t that spill any more. I’m interested in how to take a mark or shape and move it between the more pragmatic, truth-telling way of using it and the psychological and gestural. Tracing is believable; I’ve taken an actual thing and given you traced evidence of it. That’s very different from the gesture of spilling, which is about the body, time, impulse – those are all subjective. By tracing, I move the viewer from subjectivity to objectivity.

LW: Trustworthy or not trustworthy seem to be such wary terms …

LCD: Perhaps the more polite way is to say subjective and objective. I guess I say trustworthy or not because it is steeped in personal experience. A friend of mine, many friends of mine, when I was growing up, would inevitably ask me: “Are you half black?” I wondered why a friend would ask me that since we already had a relationship based on subjective attributes. Why would a friend ask me about an objective attribute? With my response, they would assume that certain cliches applied to me. And when the cliches didn’t, it caused more confusion in their understanding of me as a human being, as the subjective person they had connected to. So that’s why I started to think in art, in visual language, that there are things that people trust as truth and there are things they see as subjective, as not universal truth.

LW: You said that labels are limiting and you rebel against them, no matter what they are, because they tell you nothing about the complexity of the individual, about specificity?

LCD: I only think that’s important because all my work is driven by my experience of being a light-skinned, African American who grew up in an Orthodox Jewish neighbourhood and went to a Quaker school. It’s important because I don’t think the average white person is categorised so often. In this country, categories start early when you’re not white. But whatever those categories were, they didn’t apply to me.

LW: But it’s not all about injustice and discrimination, is it?

LCD: There’s none of that in my work. I don’t feel put upon at all. I’m interested in the language of abstract painting and what it can and cannot do. I want that language to describe the complex state of contemporary culture. I’m interested in a non-conclusive discussion of complex concepts and codes of information. That idea came from my own experience, not the experience of African Americans as a people – I’m not talking about a people. I don’t think my work is political; it’s more a reflection of the complexity of contemporary culture. I methodically make a painting and put the elements together to pull at each other as much as they can and expand the space they occupy to make it more objective and subjective. I want to find the space in the middle by manipulation, and hope that it looks like a construction, like a kind of place or world. I want them to be meticulous, although I want the meaning to be freewheeling.

LW: How would you like your viewers to respond?

LCD: I want them to ask: “What am I looking at? What is this about? Where am I located in terms of this?” And slowly, very slowly, I want them to begin to answer those questions for themselves – and to change their minds, to not come to a conclusion. 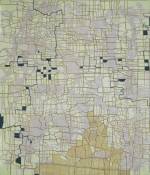 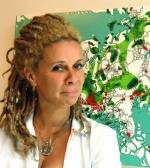