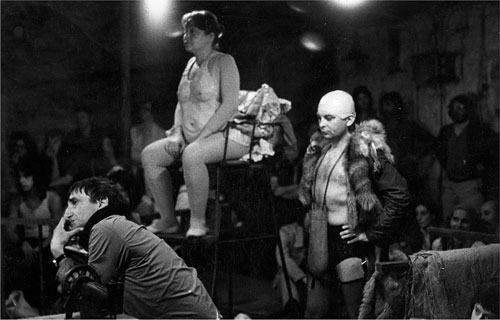 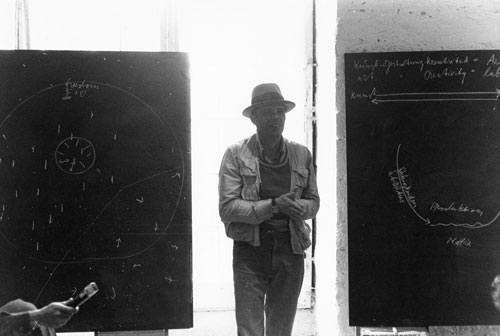 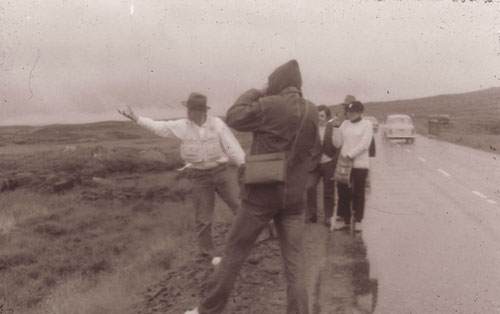 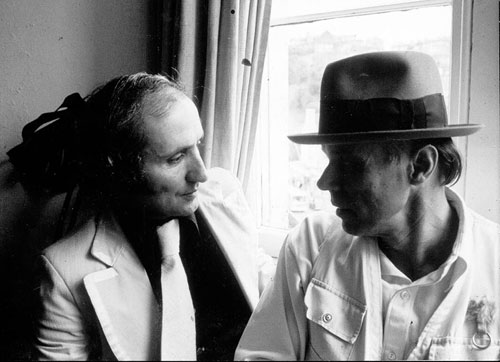 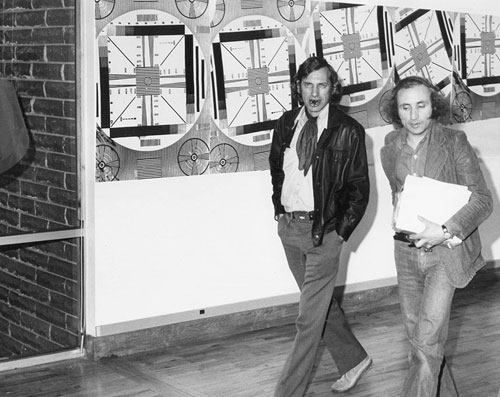 Richard Demarco interview: ‘The art world, like the Edinburgh festival itself, is in danger of being identified with the world of entertainment and leisure’

Richard Demarco has organised exhibitions and theatre events for the Edinburgh festival since 1963. He talks about his memories of the very first festival in 1947, bringing Joseph Beuys to Scotland, his own work as an artist and the Demarco Archive

Janet McKenzie: It is more than 60 years since the first Edinburgh international festival was established in 1947 in a postwar effort to “provide a platform for the flowering of the human spirit”. Can you recall for Studio International the mood and significance of the first festival?

Richard Demarco: Sadly, I can remember all too well the mood and significance of the first Edinburgh festival. Sadly, because it had the virtue of being small and the Festival fringe represented no more than eight productions: it now bears no resemblance to the gigantic nature of the festival, official and fringe programmes representing more than 3,000 events. I was 17 and still a schoolboy at Edinburgh’s Holy Cross Academy. It was through my school that I was introduced to the glory of European culture with the majestic sound of the Vienna Philharmonic Orchestra playing German music under the baton of the great German conductor Bruno Walter. Rudolph Bing, a Berliner born in Austria, was given the task of reviving the musical life of Britain. Actually, it was a self-appointed task. He strongly believed that the language of all the arts could “heal the wounds of war”. He had discovered Edinburgh in 1939 when he was directing a Glyndebourne opera season and, walking down Princes Street and seeing Edinburgh Castle, he likened Edinburgh to Salzburg, which was, in the prewar period, renowned for its musical festival. Holy Cross Academy also introduced me to [the playwright] Molière and what amounted to the National Theatre of France in the form of La Comédie-Française, under the direction of the outstanding French actor Louis Jouvet. The sun shone every day for three weeks; that helped to develop a festive spirit.

JMcK: You have organised exhibitions and theatre events since 1963. What, in your view, has the Edinburgh festival contributed to the cultural persona of Scotland?

RD: The Edinburgh festival’s spirit of internationalism has, even today, had difficulty in taking root in Scotland’s cultural life. I cannot ever forget the sadness I felt when I knew “the festival circus had left town” and that I would have to wait for the 49 long weeks for it to be established once again.

JMcK: Is it possible for you to cite, say, three of the most significant exhibitions or performances that you brought to the festival from your long association and with the festival’s long history?

RD: The three most significant exhibitions that I have the responsibility for presenting on the official festival were Strategy: Get Arts in 1970, which introduced the avant-garde spirit from Düsseldorf as a European capital of culture capable of making New York’s art world look parochial. The second exhibition was that of Romanian contemporary art in 1971. If Joseph Beuys was regarded as the most outstanding German artist in 1970, Paul Neagu had to be considered the outstanding Romanian artist in 1971. In 1972, there was the Polish avant-garde, led by the genius of Tadeusz Kantor, supported by all his artist-colleagues and two of the great gallery directors in Europe, Ryszard Stanislawski, director of the Muzeum Sztuki in Lodz, and Wieslaw Borowski, director of the Foksal Gallery in Warsaw.

JMcK: What is the significance of The Road to Meikle Seggie?

RD: The Road to Meikle Seggie is a road both in reality, defined by the history of Scotland, and also in the world of mythology, associated with such legendary figures as Fingal and his son, Ossian, and Thomas The Rhymer. Meikle Seggie is now regarded as a farm. In English it means “small grassy bank”. It is the road that leads to Meikle Seggie Farm, but it once led to the Meikle Seggie hamlet on the drovers’ road from Milnathort to Dunning, crossing the boundary between Kinross-shire and Perthshire. It is the road that takes you resolutely away from the urban space where you will find modern art galleries and museums. It is the road offering adventure and risk-taking. It eventually joins the mystical “Road to the Isles” as it crosses Rannoch Moor and heads for the Hebridean islands and shorelines. Meikle Seggie is actually the title of all my drawings, prints and watercolours. It defines the man-made presence in landscape and the journeys of medieval scholars and missionaries, Roman legionaries and cattle drovers, as well as those who have been defined as “travelling folk”. This is the road that Beuys was prepared to take, leading in his mind to Fingal’s Cave and The Giant’s Causeway on the rocky shoreline of Antrim. Beuys was inspired by the landscape and seascape of Argyll and it was there that he experienced the land of the Druids and the importance of the oak tree as a symbol of Druidic and Celtic culture, and the passage of time over a period of 700 years in relation to mankind’s allotted time on earth, limited to 70 years.

JMcK: You invited Beuys to Scotland and he made a further seven visits. What was it that he identified here that inspired him so greatly?

RD: I invited Beuys to Scotland over a period from 1970 to 1981. His eight visits caused him to create 11 master works. Sadly, only one can be found in Scotland. One of his last great works of art was that which he did for the Documenta exhibition entitled 7,000 Eiche [7,000 oaks]. He caused me to consider the need to plant another version of this masterpiece, and I can see no better place in Europe than in Argyll, which, in ancient times, was known, as Dalriada.

JMcK: Your exhibition 10 Dialogues at the Royal Scottish Academy, which I reviewed for Studio International, showed the remarkable range of avant-garde artists you brought to Scotland, and without whom it is difficult to imagine the fertile creative climate there today.

RD: All 10 artists were selected by Arthur Watson, the secretary of The Royal Scottish Academy, for inclusion in the exhibition, which celebrated the spirit of the true avant garde. It embodied what Beuys, Kantor and Neagu regarded as the “true avant garde” as opposed to the “false avant garde” propagated by contemporary artists seeking fame and fortune in the art world of today.

JMcK: What do you believe would be the effect on culture in Scotland of a yes vote for Scottish independence in the referendum?

RD: Whether the people of Scotland vote yes or no, I can see that the vote will not represent a definite majority. I would regret seeing a Scotland divided into two opposing political views. I pray that, whatever happens, there will be a period of unified endeavour, fully prepared to face the terrifying challenges identified with the tensions between Russia and Ukraine and generally between the age-old tensions existing between the worlds of Islam and the Christo-Judaic Greco-Roman cultural heritage.

JMcK: The Demarco Archive is currently housed in Edinburgh’s Summerhall. What is its value to students and scholars, and as a resource for the arts?

RD: At Summerhall, it represents a very small part of its entirety. The point is that it is not an archive – it is an artwork, a Gesamtkunstwerk, to be likened in importance to what is to be found at Ian Hamilton Finlay’s Little Sparta [garden]. Hamilton Finlay made Little Sparta as a unique work of art, collaborating with countless artists over many decades, from the 1960s until the beginning of the 21st century. Like Little Sparta, the Demarco Archive is the result of collaboration between many artists, all invited to take into account a particular part of Europe linking Scotland with the civilisations of the European continent over many millennia, beginning with the worlds identified with classical Greek and Roman culture. Everyone must know, and hope, that Little Sparta will still exist in perpetuity for countless generations of art experts, students and those who delight in the concept of a philosopher’s garden. The Demarco Archive is a work of art, but it is also valuable as an academic resource.

On 12th September, Europe will see a magnificent example of a building dedicated to housing the archives of Kantor. The building is sited on the banks of the Vistula River in Krakow. It is a €45m euro state of the art model for the way in which 21st-century archives are taken seriously. I intend to use my title European Citizen of the Year 2013 to reconnect with the politicians I met in the European parliament in Brussels. The Demarco Archive is essentially a European archive, of value to everyone who takes contemporary art seriously throughout the 20th- and 21st-century art world. Under the aegis of the office of the Scottish parliament’s minister of culture, a team of experts has been busily employed in considering the nature of the Demarco Archive. Their work gives me hope that, in the near future, it will be possible to exhibit and make the best possible use of the archive’s reality, linking the past, present and future for students at primary, secondary and tertiary levels.

JMcK: All of your activity in the arts stems from being a practising artist, as your exhibition at Tatha Gallery in Newport-on-Tay last month revealed. What have you sought to achieve as an artist yourself?

RD: My activity in the arts stems from the fact that I am an artist and, at the same time, an art teacher. Indeed, my only qualifications are those of a schoolteacher of primary and secondary levels. The subject matter of all my watercolours on exhibition at the Tatha Gallery reveals aspects of the Road to Meikle Seggie in a Scottish world that has inspired me since my childhood. I sought to use the pen, the pencil, the brush and the camera as means of expression defining, not only physical aspects of the road, but all those who have accompanied me on that road in the spirit of artists-explorers.

Most recently, I have expressed The Road to Meikle Seggie as part of the reality that the great Russian poet Mikhail Lermontov would have discovered if he had indeed fulfilled his life-long desire to live in the world of his Scottish ancestors, particularly the world of Sir Thomas Learmonth, who as the legendary Thomas The Rhymer, Lermontov, used the language of the poet to express the mystery of life. I consider all artistic activity on the highest levels as an expression of human desire, which always ascends to the condition of prayer, uniting the souls of the living and the dead with the souls of the yet unborn.

JMcK: What advice would you give to a young artist today?

RD: My advice to any young artist today would be that, if you are serious, you could remain an artist into old age so you develop the attributes of the long-distance runner. At the end of your days, you would probably feel a sense of inadequacy that you have not managed to achieve what you had set out to do. All artistic endeavours lead to the experience of failure and risk-taking. Therefore, my advice to a young artist would be to avoid at all costs the temptation to use art to achieve fame and success. The art world, like the Edinburgh festival itself, is in danger of being identified with the world of entertainment and leisure. The language of art is the most important language that a human being can use. Therefore, using it for the wrong reasons can become a form of pollution, providing false truths, concepts and ideas. The life of Beuys, like that of Neagu, Kantor and Hamilton Finlay, should be seriously studied and taken into account. It bears resemblance to the life of Leonardo da Vinci or Kazimir Malevich or Eva Hesse. Take them seriously and you will find yourself in their company.