Inside the Ordinary-Fantastic World of a Pop Artist

Inside the Ordinary-Fantastic World of a Pop Artist

This is a time, I think, for big and absolute acts, acts that affect people, and I have the feeling that this is very central to my thinking: I think art should be literally made of the ordinary world; the space should be our space, its time our time, its objects our ordinary objects; the reality of art will replace reality.1

In Writing to Learn, William Zinsser, author of the classic guide On Writing Well, describes writing as a tool for articulating, clarifying, and refining thought.2 His premise – that writing can be used to develop ideas and deepen understanding in any field – is one that Pop artist Claes Oldenburg has embraced since he began making art.

A new book published by the Museum of Modern Art (MoMA) in New York, Claes Oldenburg: Writing on the Side 1956–1969, collects a portion of Oldenburg’s thousands of pages of writings but fully demonstrates that writing was an essential part of his practice from the start. The previously unpublished material includes diary entries (facts), “notes” (ideas), facsimiles of sketches, essays, scripts for “Happenings” (performance), and poetry.3

In summer 2012, a travelling exhibition, Claes Oldenburg: The Sixties, began its tour. It opened at MoMA in April and has been refocused as Claes Oldenburg: The Street and The Store, and Claes Oldenburg: Mouse Museum/Ray Gun Wing.4 Read along with the more traditional exhibition catalogue published in 2012 by Prestel, Writing on the Side offers a holistic view of Oldenburg’s vision, intellect, and psychology. These volumes highlight recurring themes like alter egos Ray Gun and Geometric Mouse and follow a trajectory that leads, ultimately, to his later Proposed Colossal Monuments and giant public works. Together, they pinpoint Oldenburg’s revolutionary expression of the life force – the art – in mundane objects, a quality that often seems absent from paintings displayed on walls and sculpture set in museum corners.

One of the editors on the project is Maartje Oldenburg, daughter of the artist and his second wife, Coosje van Bruggen, with whom he collaborated from 1976 until her death in 2009. Maartje was joined in the book project by Achim Hochdörfer of Museum moderner Kunst Stiftung Ludwig Wien (MUMOK); MoMA’s Ann Temkin; and art historian Barbara Schröder. In her afterword, Maartje defines the fragmentary nature of her father’s writings and charts the ways in which they change, like his art, over time. Positioning his writing and art-making as parallel pursuits, she says that her father moved fluidity from one discipline to the other, keeping an antique typewriter “raised on a makeshift stand so that he could readily walk over and type a few lines during studio activities.”

Divided into six chapters corresponding, Maartje says, to six “stylistic interruptions,” the book is built on the bedrock of Oldenburg’s daily routine: diary entries and notes.5 The diary begins at the end of May 1956, when he left Chicago for New York City, and concludes at the end of 1969, when he moved to New Haven, Connecticut. The entries bring Oldenburg close to home; like many readers, he is affected by weather and mood changes; struggles to find balance between his passion (art-making) and day job; expends time and energy on feeding and clothing himself; all the while cultivating a social life and a romantic relationship. In the first chapter, we learn that he reads Freud and Blake; eats hot dogs and drinks beer; and battles inertia and nightmares. In the notes, he asks, “An artist who is not an idealist – what is that?” and observes, “In NY, some idealism still lives.”

The diary and notes reveal Oldenburg to be a “habitual editor,” in his daughter’s words, who obsessively “selected” and organised, sometimes destroying work he felt no longer represented his decisions (ie, to make soft sculpture, or to sculpt rather than paint).

In one chapter, we get a taste of Oldenburg’s travel writing, a record of living as colorful and fast-paced as in New York: “Get up early – at 7 am it is raining a little. Take wash to cleaners. I meet Herman. Wait in St. Barnabas Square thinking of pigeons. Pick up films. Return to dress and take vaporetto to Lido and then bus to meet Sidney in cabana at Excelsior…”

While the diary and notes are anchored in thinking and doing and making, the poems are freewheeling leaps of imagination:

The precise, offbeat imagery of the poems is characteristic of the scripts, essays, statements, “afterthoughts,” and other formats he used for verbal self-expression.

Born in Stockholm, Sweden, in 1929, Oldenburg grew up in Chicago, where his father was stationed as Consul General of Sweden. He studied literature and art at Yale University, receiving a BA in 1950. Back in Chicago, he took classes at the Art Institute and worked as a newspaper reporter. Relocation to New York in 1956 was a critical turning point in his career, another being his marriage to van Bruggen in 1977 and their subsequent collaboration. Barely supporting himself with a part-time job at the Cooper Union Museum, he plunged into the street life of the city’s East Village, discovering the initial sources and materials for his inventive art.

Like other Pop artists who emerged from the mid 1950s into the 1960s – Jim Dine, Andy Warhol, Roy Lichtenstein, James Rosenquist, et al. – Oldenburg challenged the fundamentals of art, thereby transforming the experience of it: What is an appropriate subject and where might art be seen? Oldenburg’s first solo show was held in a church basement gallery. Another early milestone, “The Store,” consists of sculptures modelled on the commodities of daily life, initially presented in December 1961 in a storefront on the Lower East Side.

Art historians link Pop Art to Marcel Duchamp’s “readymades” and “Fountain,” a porcelain urinal that caused quite a stir when it appeared in 1917. In the 1960s, when Pop Art was causing its own stir, Duchamp commissioned replicas of the urinal, some eventually purchased by major museums. Certainly, Oldenburg’s sculptures of toilets, light switches, food, and furniture become surreal in altered scale and context (“ordinary-fantastic”), but Duchamp’s audience was firmly fixed in the avant-garde. By contrast, Oldenburg’s sculptures – witty, playful and often ironic/symbolic takes on popular culture – point to a humanist behind the scenes. In his hands, exaggeration, a primary tactic of the satirist, elicits a warm, appreciative response.

The chronology in Writing on the Side conveys the sense of an artist moving from strength to strength, capturing the attention of both the establishment and the renegades. Yet Oldenburg’s writings tell of continual self-examination, with doubts and false starts alternating with breakthroughs and successes; from “Fine weather but I wake up tired + depressed” to “a week of good ideas – waking up with them”.

Art critic John Russell comments on the payback when artists in any age go out on a limb to tread new ground, risking the scorn of peers, the public, critics, and collectors:

When art is made new, we are made new with it. We have a sense of solidarity with our own time, and of psychic energies shared and redoubled, which is just about the most satisfying thing that life has to offer.6

In Oldenburg’s ordinary-fantastic world the payback from viewing his 1962 “Floor-burger” might be as satisfying – in resonance – as consuming the tastier fast food which inspired the sculpture.7 As a writer, his self-searching and lack of pretension suggest a reason for such resonance: He has been able to reflect real life back to his audiences because he is fully immersed in his own. He felt the pulse of the new and channelled its energy into the parallel disciplines of art and writing.

4. Co-organised by MUMOK, Vienna, and the Guggenheim Museum Bilbao, Spain, “Claes Oldenburg: The Sixties” is curated by MUMOK’s Achim Hochdörfer. The show debuted at the Ludwig Museum in Cologne, Germany (22 June–30 September 2012) and travelled to the Guggenheim Museum Bilbao (30 October 2012–17 February 2013) before arriving at MoMA (14 April–5 August 2013). The final venue is the Walker Art Center in Minneapolis, Minnesota (13 September 2013–12 January 2014).

7. In 1962, the Art Gallery of Ontario (AGO) purchased “Floor-burger,” Oldenburg’s first soft sculpture, from the Sidney Janus Gallery. AGO’s Shiralee Hudson Hill relates the controversy surrounding the purchase at: http://artmatters.ca/wp/2012/10/ago-history-the-controversial-arrival-of-claes-oldenburgs-floor-burger/ 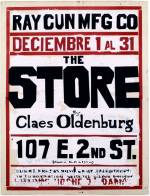 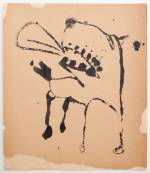 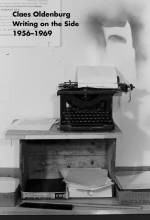