Burtynsky’s photographs capture the drama of a planet in flux, combining technical virtuosity with a powerful message about climate change and our role in destroying the Earth 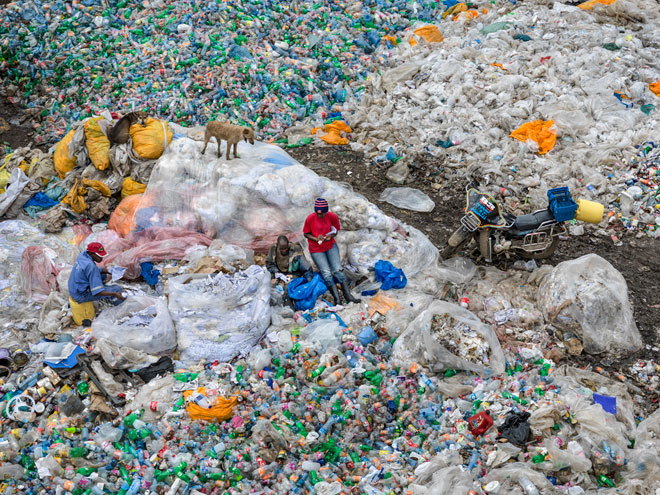 In July 2017, construction workers were digging the foundations for a new fire and police station in the town of Thornton, Colorado, when they uncovered something unexpected: the fossilised remains of a triceratops dating back 66m years. “A lot of times these will be ploughed up and they won’t be recognised,” the curator of a local natural history museum said. Humans have been manipulating the natural world since the dawn of civilisation, but the past 100 years has seen an exponential and uncontrolled increase in disruption and destruction of delicately balanced ecosystems and geologies previously undisturbed for millions of years. We are all-too familiar with the consequences: crumbling ice caps, bleached coral reefs and rising sea levels threatening to engulf our settlements with acidified water.

In the mid-20th century, hundreds of atmospheric nuclear weapons tests were conducted, coating the Earth in a thin layer of radioactive particles. Many scientists are proposing using this layer of toxic dust as the indelible signature of a new geological age, the Anthropocene, an era defined by the impact of humanity on the Earth’s ecology. Canadian photographer Edward Burtynsky (b1955) has long been preoccupied with the troubled intersection of human industry and natural ecosystems, and his most recent output, The Human Signature, on show at the Flowers Gallery, London, is part of his recently launched Anthropocene Project, which explores the various manifestations of human mark-making on our planet.

Burtynsky has built a reputation for dramatic, large-scale artworks that urgently question the sustainability of modern life: he has travelled around the world, from oil fields in Nigeria to potash mines in Russia, to capture the drama of a planet in flux. With the new photographs on show at the Flowers Gallery, Burtynsky continues with his characteristic style, while experimenting with more abstracted points of view, enabled and mediated by innovations in photographic technology.

People rarely feature in Burtynsky’s work: it is what they leave behind en masse that matters to the artist. Throughout his career, Burtynsky has contrasted natural and irregular patterns with the rigid rational geometries of man-made landscapes: a lurid green river snaking through rectangular irrigated fields, Carrara marble hewn into rectangular blocks in an isometric lattice. Burtynsky’s photographs often seem aloof and depersonalised, taken from a raised vantage point, flattening foreground and background into one wide-angle view. The viewer does not know where to look first, the eye skittering across the surface of blasted landscapes that, for all their degradation, are also vistas of devastating beauty.

Phosphor Tailings Pond #4, Near Lakeland, Florida (2012) shows a smooth bank of white phosphorus disturbed by great thrusts of a bulldozer, with unsuspecting alligators basking on a nearby shore. Three works taken at a Russian potash mine show elegant swirls of sunset-coloured rock smashed by drills into perfectly circular cones reminiscent of craters or crop circles. Burtynsky often remarks on the influence of abstract expressionism on his work, and it is easy to see in these pictures: Jackson Pollock is not far away from these chaotic potpourris of shapes and colours, the broad harsh streaks of man-made interventions reminiscent of the brash violence of a Franz Kline monochrome. Burtynsky has evidently found these artists instructive in teasing out emotional messages from what, at first, appear to be stark, sterile or inaccessible shapes and patterns.

Burtynsky is often compared to contemporaries such as Andreas Gursky and David Maisel, who also explore similar anthropological themes, and all three have embraced the rapid progress of digital photography and ancillary technology with open arms. Burtynsky makes frequent use of colour correction, as well as stitching multiple photographs together to create ultra-high-resolution prints that are mind-boggling in scale. In recent years, he has experimented with drone photography and augmented reality (AR) technologies such as photogrammetry to unlock new perspectives and create three-dimensional images. The results are often astounding, vast compositions rich in detail, structured around dramatic contrasts of geometry and lurid, saturated colours.

Burtynsky’s works are so successful because they combine this technical virtuosity with a powerfully emotive message. The brilliant colours and fractal shapes of Pengah Wall #2, Komodo National Park, Indonesia (2017), a work made up of many different photographs stitched together digitally, stand as a stark reminder of continuing environmental destruction. The sharp pinpricks of colour are echoed in Dandora Landfill #3, Plastics Recycling, Nairobi, Kenya (2016), a dune of plastic bottles presented with its own kind of uncanny beauty. Burtynsky’s work thrives on this tension between beauty and corruption – the pictures inspire emotions of rapture, wonderment and awe at the ingenuity and sheer brute force of human industry, yet intermingled with these are feelings of despair, loss, guilt and complicity.

This mixture of emotional cues can be a weakness as well as a strength: while the artworks may be thought provoking, instruments for political change they are not. Burtynsky seems restless, anxious to situate his art within a wider framework of environmental activism. His Anthropocene Project is a collaborative multimedia campaign in pursuit of a far wider audience than the typical art enthusiast, spanning Burtynsky’s photographs as well as an eponymous documentary film, and larger exhibitions at the Art Gallery of Ontario in Toronto, and the National Gallery of Canada. Burtynsky is an effective marketer as well as photographer, and it is hard not to appreciate the work he is doing to animate the debate around climate change and our proper place in the natural world. The recent scientific paper laying out the grim consequences of a 2C rise in temperatures, although informative, bypasses many people, while Burtynsky’s works speak with an urgency and directness that is impossible to ignore.