The ancient Greeks are held up as the epitome of reason and measured beauty. But, as the British Museum’s current exhibition demonstrates, you don’t need to look far beyond the rationality and philosophical musings to reveal chaos and hidden passions

When you think of Greek statues, what comes to mind? Gleaming white marble? Rippling torsos? Or the imposing grandeur of impassive faces looking down from high pedestals? Popular ideas about ancient history are nearly always informed by the centuries that followed. From the Romans to the Renaissance, from neoclassicism to modernism, Greek art has been stripped down, sanitised and buffed to a cold sheen that reflects the desires of those gazing at its gleaming marble. We have moulded this ancient civilisation into a cultural and intellectual utopia, an ideal to aspire to, creating a visual template that permeates public life.

In Europe and the English speaking world, the columns, pediments, steps and cornices of Greek architecture form the model for banks and civil buildings, and the stoic expressions on our monuments reflect those calm faces of classical antiquity. But do not be deceived, for drama was not contained solely within Greek plays and prose. Works of art also speak of political and intellectual battles, not to mention wars, forbidden desires, death, the afterlife, lust, tragedy, excess and debauchery. Look closely enough and all of life is represented in ancient marble and terracotta.

Defining beauty starts by lulling visitors into a false sense of security. A dimly lit room introduces us to some familiar faces and one remarkable discovery. The curvaceous back of a crouching Venus at her bath, a second century AD Roman copy of a Greek original, greets us at the start of this artistic odyssey. She has not travelled far. Her permanent home is just a few rooms away. Here, also, is the Discus Thrower, perhaps the most well-known classical statue. He is another Roman copy after the lost original. In fact, most sculptures that we know so well as Greek are later copies. A great many of the originals were cast from bronze and subsequently melted down in late antiquity, as the metal became more valuable than the art. This is why an original bronze wrestler, raised in 1999 from the seabed off the coast of Croatia, is so remarkable. He stands proudly in this first room, spotlit in front of a red curtain like a celebrity at a film premier.

There is some discussion in this room about the Greek idea of the perfect male form. Pythagoras believed that numbers could reveal the hidden order of the world, and philosophers and artists competed to form treatises about what they believed the ideal body should look like and how it should be represented in art. In classical antiquity it was thought the best way to achieve this was to compile a composite, piecing together the best bits from living examples to create an ideal figure, perfectly proportioned and beautifully balanced, the product of ratios and reason. Ultimately, this idealised nude became a symbol of both physical and moral excellence.

So far, so classical. But if you think this is the whole story, the next room will come as something of a shock. The true nature of the ancient Greeks is revealed like a slap in the face, beginning with a glimmering gilded statue of Athena, goddess of war and protector of Athens. This is a reconstruction of an original that once stood on the Acropolis, again based on various Roman copies, but it gives a vivid example of the Greek interpretation of the divine. The gods, it was believed, were too beautiful to gaze upon, their divine perfection unbearable to human eyes. Shining under the Mediterranean sun, however, this statue must have been blinding, and perhaps the closest thing the Athenians had to looking upon the gods themselves. Another reconstruction of Athena shows just how intricately such figures could be painted. Her magical cloak, a present from Zeus, is edged with rearing green snakes and painted with more than a thousand multicoloured scales. Skin tones were also used, as were additions such as bronze weapons and even lead tresses of hair. It has been discovered, relatively recently, that a great many, if not all, statues were brightly painted.

Just as the art of the classical world has been appropriated by countless cultures and generations since, the Greeks too drew ideas and inspiration from outside influences, ranging from nearby Egypt to as far afield as India. One room of this exhibition is dedicated to the quest for realism and assimilation of foreign ideas. But just as interesting are the many tiny statuettes that give insights into the daily lives of everyday people. Three small terracotta figures demonstrate the lengths to which well-to-do housewives were encouraged to go to preserve their modesty and keep the sun off their skin, as a fair complexion was considered desirable in women. All are depicted draped in swathes of fabric and one sports an unusual hat that resembles an upside-down spinning top. Once married, the life of a Greek woman was limited to domestic management and religious festivals, and she was certainly not permitted to vote.

Greek vases also reveal much about the private lives of those who used them. An erotic scene lines the base of one of the drinking cups displayed here, providing the drinker with a titillating surprise on finishing his wine. Other vases depict similar scenes. Various aspects of drinking parties (symposia) where exotic dancers, prostitutes and even young boys were used for pleasure are recorded in red and black on the amphorae and drinking vessels. In Greek culture, young boys were expected to submit to relationships with older men as part of their journey into adulthood. Joining their human counterparts in these earthenware revelries are the strange and unruly satyrs, half-man, half-goat, who, like a great many other mythical creatures, go even further than their human counterparts, their sexual appetites and unruly behaviour outstripping even the most lustful men. Look out, too, for the maenads, centaurs and Amazons who also served to represent the irrational mind and supposedly uncivilised world beyond Greece.

Later Greek art tended towards depicting the physiognomy of the face, the likenesses of famous men and the passions of the gods. Known as Hellenistic art, this later style has influenced some of Europe’s most iconic masterpieces. The Belvedere Torso, a great study of twisting muscle and marble made flesh, thought to represent Heracles or perhaps Ajax contemplating suicide, became Michelangelo’s inspiration for Adam on the ceiling of the Sistine Chapel. His red chalk drawing and the fragmentary original marble are both displayed here as the crowning glory of the exhibition. 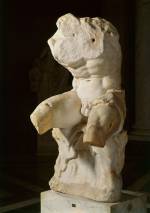 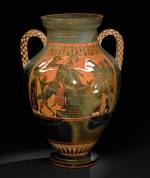 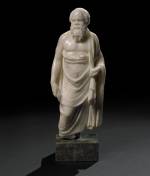 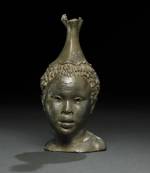 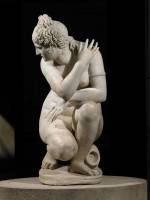 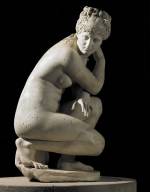 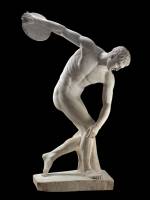 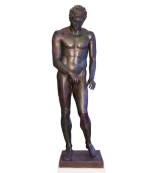