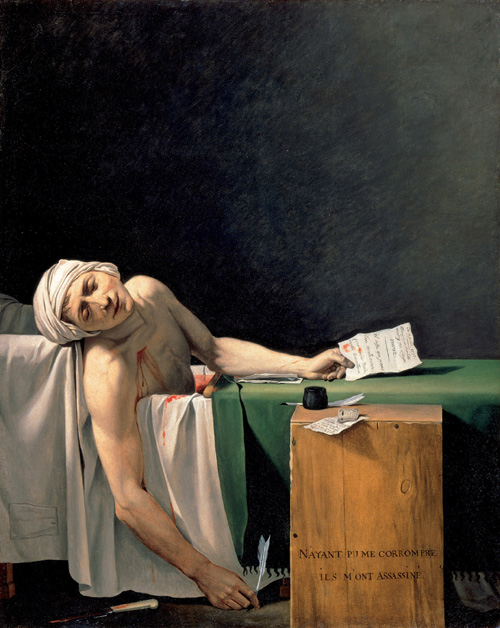 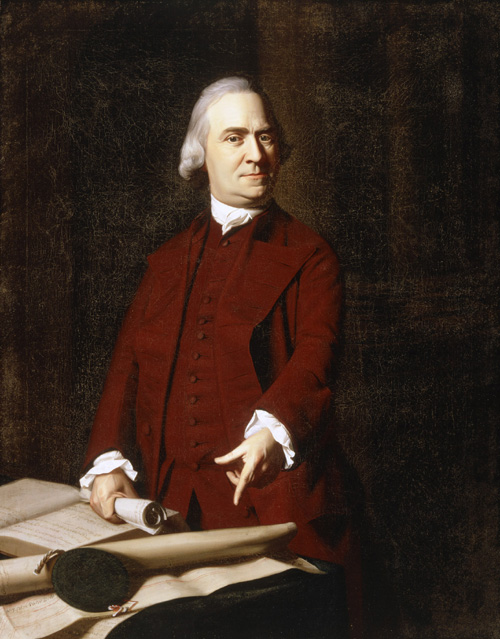 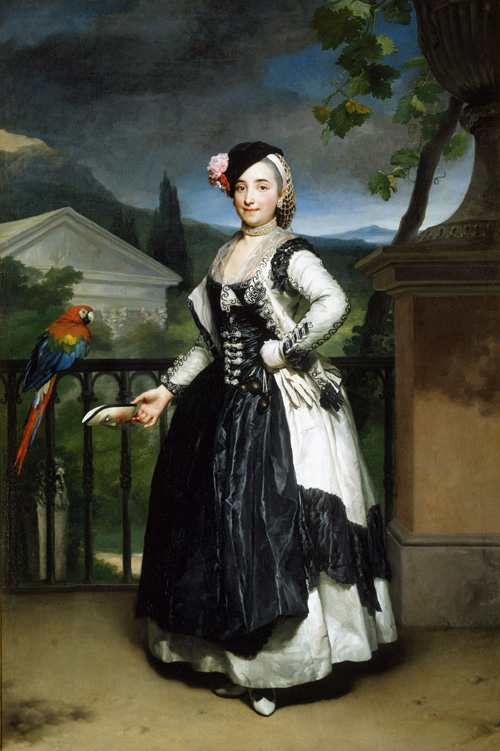 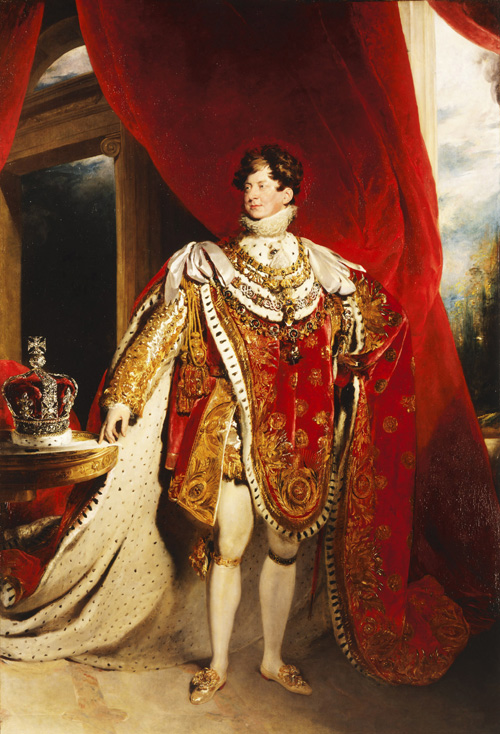 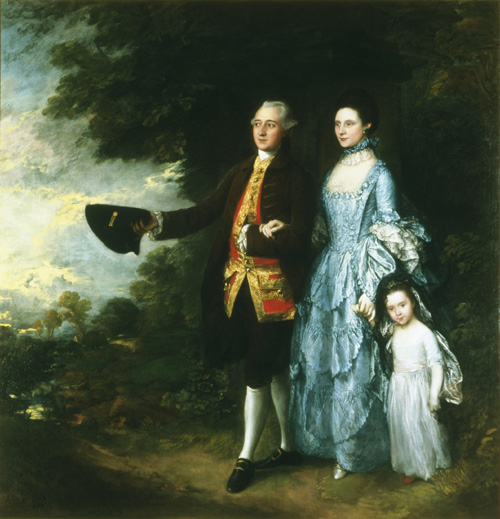 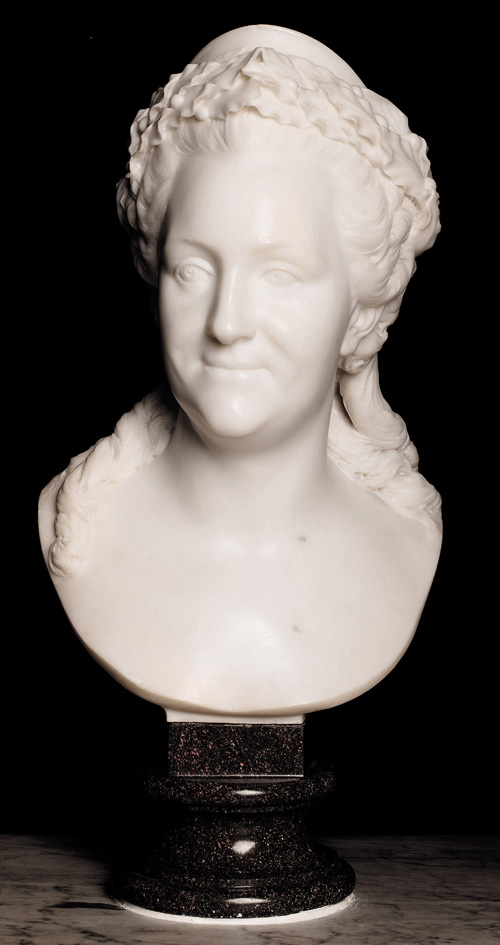 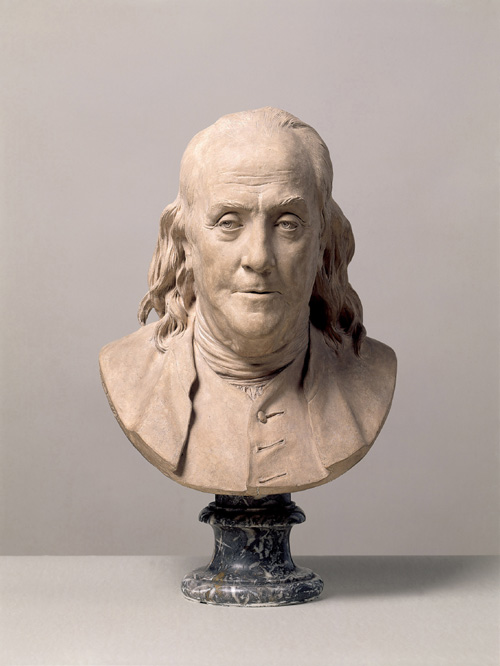 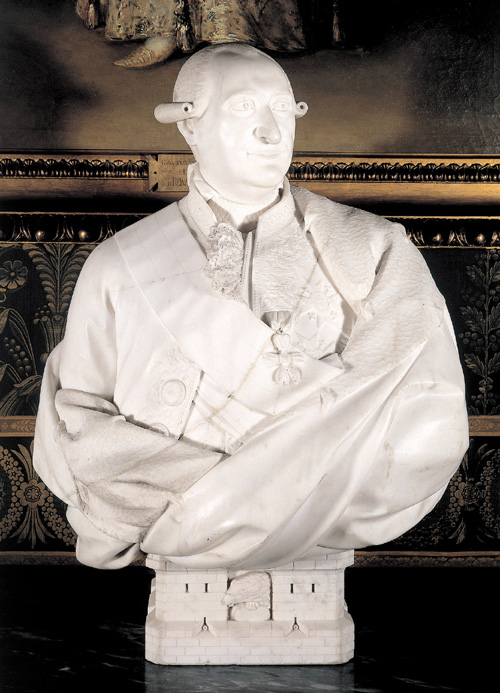 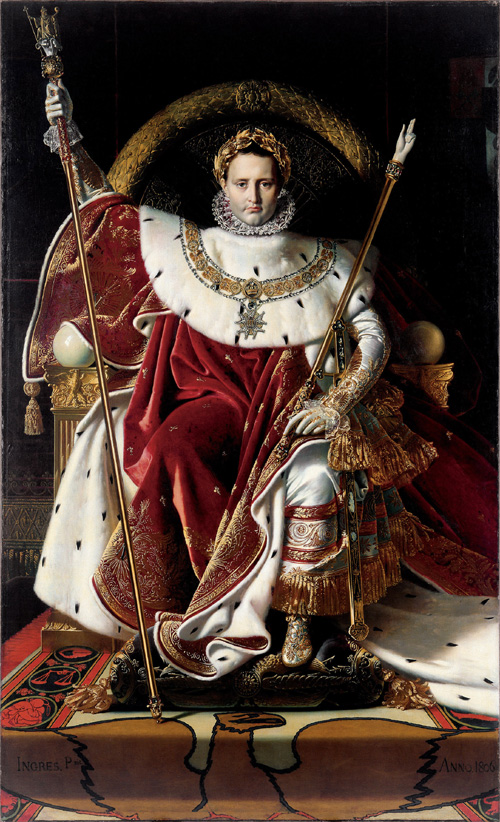 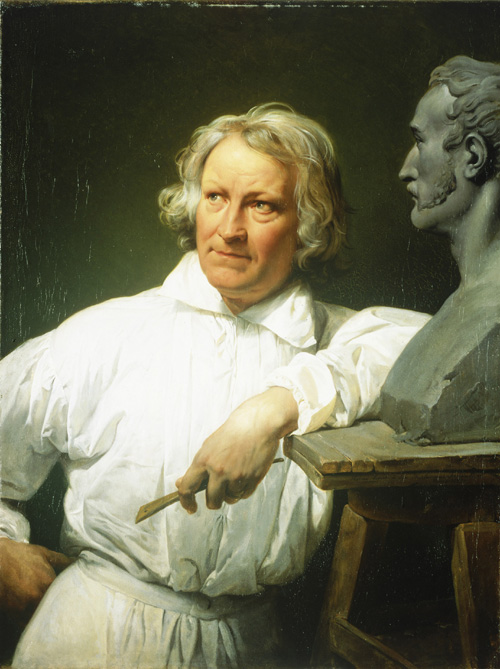 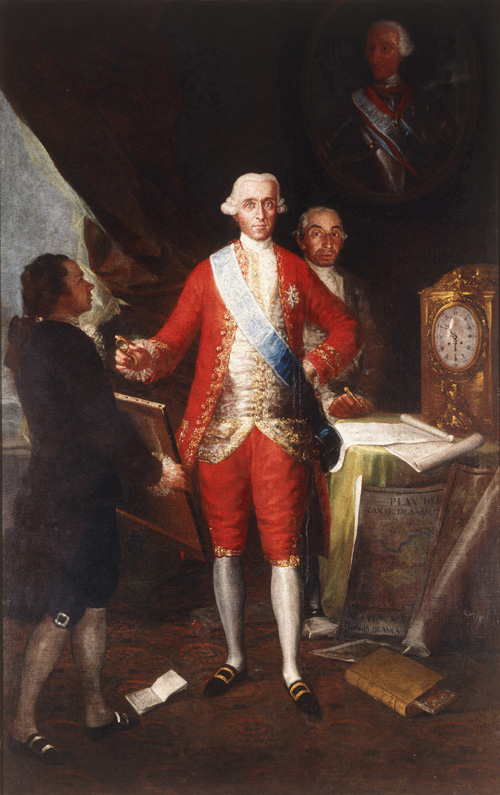 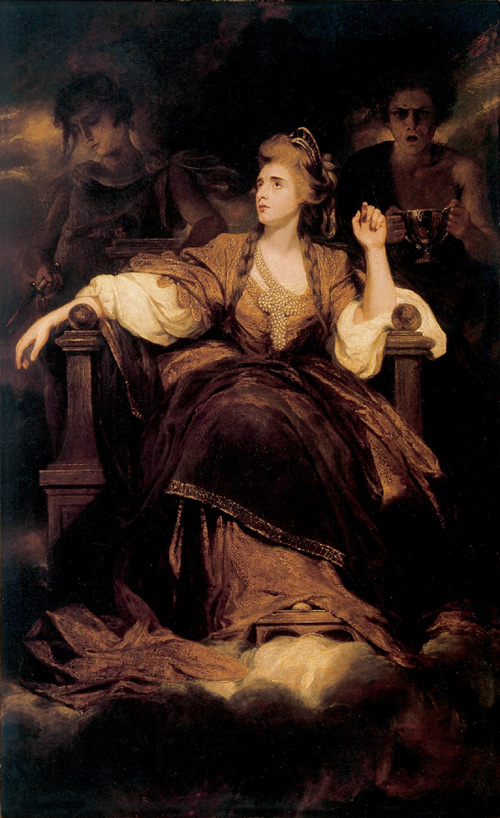 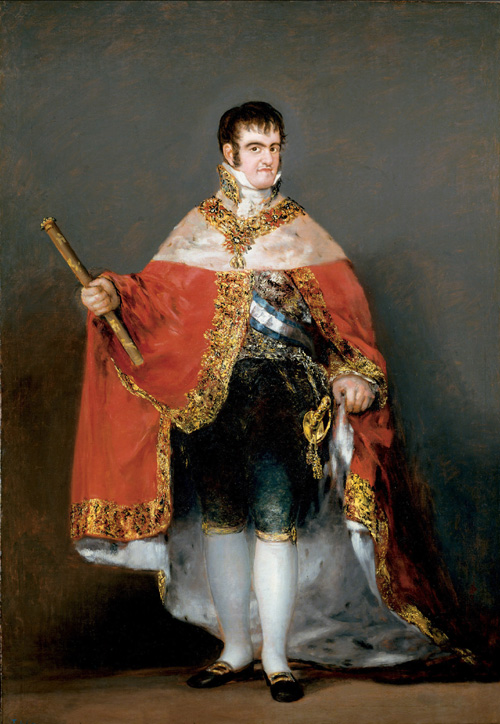 Citizens and Kings: Portraits in the Age of Revolution 1760-1830

The Royal Academy of Arts is currently hosting 'Citizens and Kings: Portraiture in the Age of Revolution'. However, despite the British Museum's own superb and scholarly comprehensive exhibition entitled 'Enlightenment: Discovering the World in the Eighteenth Century' (2003), there seems little evidence of deep scholarship here, building upon that masterly tour de force. Rather, this is (of course) an 'entertainment' (which it undoubtedly will prove to be for the broad mass of the Royal Academy's regular public). This is a shame, for the British Museum had unearthed a world of discovery, no less.

To focus on the range of portraits, paintings and sculptured busts at the Royal Academy serves to underpin the great venture that was the European Enlightenment, but reveals little that is new - despite the revival of portraiture in the contemporary world today - about the real motivations of those keen, expectant, intelligent beings and the groundswell of learning that balanced the adventurous expeditions and opportunistic forays to new sites of the leading exponents. The European Enlightenment has, of course, been experiencing a period of recession in the minds of academia, literati and commentators generally. Simon Schama may have been inspired by David's gory and tragic 'Death of Marat' in writing of the French Revolution (that remarkable painting is on loan from Paris), but the Enlightenment was nothing much to do with atrocity, although it recognised its persistence in the story of humanity. It could be left to Catherine the Great and King Frederick of Prussia in their Northern fastnesses, to stand for a genuine ambition of European intellectual spread.

The Scottish 18th-century Enlightenment itself, certainly, through such luminaries as the philosopher David Hume and the economist Adam Smith broadened the intellectual scope of the enlightenment concept of rationality. In music, Mozart brought a revolutionary musical development to Europe, and in architecture, the mood spread gradually, interleaving a classicism inherited from the Renaissance with neo-classical experimentation. Thomas Jefferson embraced the whole enlightenment world enthusiastically, even making a fortnight's tour of English landscape gardens, and Catherine the Great commissioned a massive Wedgwood dinner service of 944 pieces with views of English towns, gardens and natural and improved landscapes, which was kept at the Hermitage. National boundaries that had so inhibited European interchange since the Renaissance were seen to come down.

Jefferson saw no problem in the slave trade, which seemed to him to be the inevitable product of European expansion; indeed, the broader proceeds of colonial trade largely financed the Enlightenment. Adam Smith existed against a background of urban and rural regeneration financed in deluge by such wealth as it cascaded through the whole of Britain and Europe. The Enlightenment thinking was broadly seen to gloss over the immediate developments of all this surging out from Bristol, Liverpool and Glasgow into the surrounding cities and country estates. After all, it was not actually Europeans that rounded up the slaves - they were traded out by black accomplices, slave masters and intermediaries, or so the potentates could convince themselves. The exhibition opening at the Royal Academy encompasses an art based upon all of this; and it is upon the portraits and busts, and the confident and over-weaning faces that the public's first appraisal must fall. So far, so good.

This enlightenment society is one that developed as much upon the proceeds of an economic boom as upon scientific and intellectual discovery. In the exhibition, one's interest is drawn to the faces and figures of the beneficiaries. Seemingly bottomless wells of capital were established, which still characterise British society today. Families who had struggled through Civil War and the Jacobite rebellions were on their last legs; successful colonial traders brought dowries of the equivalent of millions in today's currency to the ailing gentry, and estates were rebuilt to the extent that they could disport themselves with equanimity in the Victorian age to come. But what this exhibition celebrates is not the spread of scholarship and learning epitomised by the discoveries of the natural world, the artificial world, the recovery and re-interpretation of ancient civilisations, nor the voyages of discovery to the antipodes - it is the expansion of bourgeois cultures.

This is mostly expressed through the paintings of successful entrepreneurs, oligarchs, kings, queens and emperors. One has to take a leaf out the late Sir Isaiah Berlin's writing, whereby he connected this ascendancy and pointed out the link, so obviously apparent, to the mid-20th century's most ruthless European dictators and totalitarian leaders, with their Nazism, fascism under Mussolini and Franco, and Bolshevism in a single sweep. What Berlin referred to was the possession of a 'deep, serene, unshakable conviction in the minds of some of the most merciless tyrants and persecutors in history'. All were in denial themselves. As the 21st century approached, the French Revolution became discredited. Schama's book Citizens is obsessed with the terror of 1794, even more than the historically pivotal storming of the Bastille. Now, too, we have Michael Burleigh's Earthly Powers, which updates us in two volumes in terms of religious Islamic fascism and its new militancy. As we view the portraits it is easy to move from the sublime to the brazenly ridiculous here. The portrait of George IV by Sir Thomas Lawrence is hardly threatening, and tempts one to find the even more camp image of that happy being on his visit to Edinburgh, orchestrated by Sir Walter Scott, replete in highland kilt, saucily offered knee and calf, clad in silky pink tights. We need to go back to Goya's alarmist Ferdinand VII, replete with untold baubles and kingly court dress. Nor does David's 'The Emperor Napoleon' deny us the reality of this 'little big man', almost a childhood image, a sceptred fancy-dressed-up dreamer, far from that reality of the imperialist oppressor of half Europe.

On a more modest note comes the figure group of the charming Byam family, landed worthies, but equally in denial of their sources of wealth. The sheer volume of colonial acquisitions and trading that underpinned the flush of enlightenment, financed libraries, grand tourist collections and Brownian parks. The portrait busts in the exhibition were of figures who represented the new class of 'governors' as the Trevelyan family later saw themselves, dedicated to the public good, but historically blinded for all their dedication to learning. Voltaire, Kant and Charles James Fox are represented by the portraitists as incomparably pleased with themselves, Shubin's portrait bust of Catherine the Great seems girlishly flirtatious, in no way the intellectual leader she was. The artists invariably perceived the real identities of their subjects. Such insights, by the artists themselves, about their clients, and how these qualities come to be portrayed, discreetly or else overtly, are what goes to render this exhibition, so ably curated by Mary Anne Stevens, a full menu of pleasurable experience.