This exhibition examines comprehensively two particular styles of Indian painting, which developed between the 17th and 19th centuries in Jodphur, Rajasthan, Northern India. The first of these is one of ornate florescence that focused on the combination of the joys of courtly existence amidst the surrounding, verdant forests, which can be clarified as a garden of creation. The second range of paintings from Jodphur became preoccupied with metaphysical content and areas of philosophical speculation, most particularly with the perceived origins of the universe, i.e. the cosmos. The Maharajahs ruling this substantial territory of North-West India took great individual pleasure from such works across three generations of Jodphur rulers, all with varying aesthetic predilections and motivated also by varying political attitudes. Accordingly, as the exhibition reveals, there comes a point where paintings, having been a depiction of earthly paradise, become, especially in the realm of portraiture of the rulers, a tool of political power. This elegant transition makes the study of such creativity, in terms of its outputs, especially fascinating. What role can art play in the pursuit of power, then and now?

The exhibition falls into two parts, from the reign of Bakhat Singh, to Maharajah Man Singh. The latter Singh actually commissioned over 1000 paintings from the court painters, all in a metaphysical vein, so representing Hindu concepts and beliefs, and the accompanying written texts. Previously however, Bakhat Singh had sought atmospheric and landscape effects, such as monsoon storms. But when Maharajah Man Singh took hold of power in Marwar, he pursued a very different and more casuistic agenda: he realised that he could consolidate his own sovereignty by pursuing for his kingdom a timeless aesthetic, driving from a heterodox yogic order. His new religious power elite were thus enabled to transform themselves into the kingdom’s single, most powerful ruling group. Art was now in the service of power as seldom before experienced in India. As Debra Diamond, Chief Curator of the exhibition points out in a keynote essay in the magisterial catalogue, ‘Painting, Politics and Devotion’ paintings, portraiture and all, worked to legitimate Man Singh’s rule and his conception of sovereignty. Fortune and Providence later combined to save him from the efforts of a predatory uncle to usurp his
Power. Evidently a seemingly miraculous foretelling of Man Singh’s ultimate survival was given offering victory just as he was planning surrender, at which point the usurper as if by divine intervention, suddenly died. More than ever now portraiture was raised to elevate the esteem of the ruling house of Man Singh.

The tale of how the British East India Company, with characteristic imperial sway now saw Man Singh restored fully to power, as with so many of their stratagems on the Indian sub-continent, speaks legions of how the Raj survived and itself prospered for so long. They indeed had already revealed a positive quest for order having already signed up with Jodphur to provide protection against all-comers. It was then left to Man Singh in the end to survive the reaction of his nobility to his being in league with a foreign power but only just achieved in a desperate measure of pawning his jewels. Astutely, when Man Singh finally died, the British were to place his closest blood relative on the Jodphur throne. The Nath ascendancy now came to an end, however, and over a period the court ran into decline, marked as never more so symbolically appropriate by the taking down of all the vital portraits and consigning them to storage.

The Arthur M Sackler Gallery at the Smithsonian Institution was itself instrumental in organising Garden and Cosmos. The Mehrangarth Museum Trust in India collaborated notably two major works were loaned from the National Museum in Delhi, and the British Museum added two fine works from its own Indian collections. The exhibition catalogue, Garden & Cosmos, traces the true origins of Jodphur court painting through this curatorial labyrinth from the early l7th century onwards. In some of the Ragamala series, the importance of ornate court and temple architecture is fully revealed. At the same time, by the turn to the l8th century the special ambience and aura of the so-called ’Garden’ background is highly emphasised. The actual painterly depiction of Royal Pastimes in the Gardens at Nagaur Place is surreal, meticulously portrayed, spatially economical yet sublimely beautiful, a moonlight theatre dedicated to love. Another set piece shows, in a balmy summer evening, the court enjoying an open-air performance by a female orchestra. The Nagaur paintings remind one however that this lush oasis of verdure is in stark contrast the surrounding desert lands. 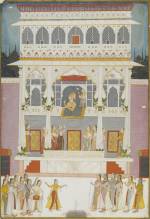