Anthony McCall: ‘I wondered if it would be possible to make a film that existed only at the moment of projection’

Anthony McCall: ‘I wondered if it would be possible to make a film that existed only at the moment of projection’

The artist, a key figure in the avant-garde London Film-makers’ Co-operative in the 1970s, discusses his current exhibition at a 15th-century gothic palace in Barcelona

Anthony McCall was born in England in 1946, growing up in Kent and becoming a key figure in the London Film-makers Co-operative before moving to New York in 1973, where he has been based ever since. McCall is known for making cross-disciplinary works that include film, installation, drawing, performance and sculpture. Cinema is an underlying feature throughout, as time and light are elements felt so heavily in his practice. The artist’s first survey in Spain recently opened at the Fundació Gaspar, Barcelona.

Allie Biswas: Your works from the 1970s were noted for addressing the specific properties of film itself – such as light, time, surface and projection. When did you start to think about film in this way?

Anthony McCall: The train of thought that led to the “solid light” films began after I had completed Landscape for Fire in 1972. This was a 16mm film record of one of my fire performances and it was more or less my first film. As I showed it, I became uneasy about the fact that, although it was the performance that I cared about, it was the film, a secondary event, that audiences watched: the projection of the film took place at a location far from the film screening and the events shown were already in the past. I wondered if it would be possible to make a film that existed only at the moment of projection, and within a continuous present tense that was shared with the audience. The background to these thoughts included the writings and music of John Cage, Peter Gidal’s advocacy for a “stucturalist materialist” film practice, and my discovery of the films of Michael Snow (such as Wavelength), and those of Andy Warhol (such as Empire).

AB: How about your involvement with the London Film-makers’ Cooperative?

AM: During the 1970s I showed three or four times at the Co-op. That included a double programme in 1974 with Carolee Schneemann: she presented a section of Up to and Including Her Limits, which included double screen Super 8 diary footage alongside a meditative live performance where she hung suspended from a harness while drawing on the walls and floor. During the second half of the same evening, I showed Line Describing a Cone together with the other three “cone” films. A year or so later, the Co-op staged my five-and-a-half-hour solid-light Long Film for Four Projectors. This required a reel change every 35 minutes with other co-op film-makers projecting: William Raban, Annabel Nicolson and Malcolm Le Grice.

AB: You first became known as an artist through your series of “solid light” installations, which started with Line Describing a Cone in 1973. In this work, a three-dimensional form is realised in space through light emanating from a projector. Can you talk about what impact making this work had on you at the time? Was there some feeling of having “cracked it”, or was it less euphoric than that?

AM: Even though I had made tests and knew more or less what to expect, I was surprised by the emotional charge produced by the gradual growth of the conical form. It also put me explicitly into territory that I hadn’t exactly anticipated, like sculptural space.

AB: Did your light installations enable you to transition from a film-maker to an artist?

AM: Well, actually, I started out as an artist assuming that performance, slide projection, photography and film were all legitimate art mediums. However, at the time, the galleries and museums did not really consider film to be part of what they did, so, for instance, in New York, I showed my work at avant-garde film showplaces such as the Millennium Film Workshop and Collective for Living Cinema. But the changing landscape began to be represented. For instance, there were two exhibitions in London that included my work, both in 1972: the Camden Arts Centre survey show titled Photography into Art and the extensive three-part exhibition mounted by the Gallery House, A Survey of the Avant Garde in Britain, which included conceptual and photographic work, with part III being devoted to a long programme of film, some of which came from the London Filmmakers’ Co-operative.

AB: At the end of the 70s, you left the art world and set up a graphic design business, which you ran for 20 years. What compelled that decision, and what made you wish to return to artmaking, in the sense of creating films and sculptures?

AM: In the late 70s, there was no possibility of gallery representation and I began designing and editing art books and catalogues for a living. But I also received an unwelcome shock when I discovered that the films that I’d shown successfully in downtown spaces for years were quite invisible when shown in a modern museum or kunsthall: the air was too clean. No dust, no smokers. I experimented with various mediums, such as dry ice or frankincense, but none was satisfactory. Over the next 20 years, video became ubiquitous in the art world; then, in the early- or mid-90s I became aware of the recently invented haze machine, which solved the visibility problem immediately. A few years later, I began drawing again, and began a new series of solid-light works.

AB: Your current exhibition, Solid Light, Performance and Public Works, is at Fundació Gaspar, an early-15th-century gothic palace. How did preparing to present your work in this space differ from, say, a conventional gallery?

AM: Gloria Moure, the curator, set out to make a survey exhibition that would give a sense of the range of ideas in play since 1972. We had six rooms, which required us to be very selective. So there are performance works, two solid-light installations, plus a room of drawings. Included are a couple of my earliest performance pieces, Circulation Figures (1972/2011) and Five-Minute Drawing (1974), and my most recent solid-light work, Coming About (2016).

AB: Solid Light, Performance and Public Works marks the premiere of Coming About, which was made especially for the exhibition. Can you talk about the process behind it?

AM: The solid-light films of the 70s were all horizontally oriented, as befits their origins in cinema. In 2004, I began making vertically oriented installations as well as horizontal. Whichever the orientation, the scale was identical: 10 metres from side to side, or 10 metres tall with an image width (on the wall or on the floor) of about 4.5 metres. A year ago, I initiated a new series based on a pair of diagonally oriented projectors’ beams. Each projector is high up on the ceiling, some 10 metres apart, but the two slanting beams converge in a single image on the floor. I develop works using a combination of ordinary drawing, storyboards, paper models, programming and, finally, installation in the studio at quarter-scale. Projecting from ceiling to tabletop, the working model enables me to really get to know what I’m dealing with and to alter the elements in play until I’m satisfied.

AB: In your book Anthony McCall: Notebooks and Conversations(Lund Humphries, 2015), the conversations that you have with the authors are focused on your methodologies and ideas, although the role of emotion and the body are key aspects of the light installations. You hint at this yourself, as we can see the titles of works changing in the 2000s to incorporate this personal/psychological angle. Could you offer your thoughts on this?

AM: During the late 90s when I was beginning to think about making art again after a break of 20 years, I began looking at the early solid-light films. One of them, Cone of Variable Volume (1974), consisted of a complete cone of light that expanded and contracted at four different speeds, from very slow to very fast. Though I hadn’t noticed this before, it seemed very obvious that the cone was, in effect, “breathing” and that this property was potentially a new starting point. The solid-light works that followed address the corporeal, which is reflected in the titles – for instance: Between You and I; You and I, Horizontal; Meeting You Halfway; Face to Face. These titles also, of course, can be seen to refer to the relationship between the object and the viewer.

AB: The book also highlights how essential drawing is to your practice. How did you decide which drawings to include in Solid Light, Performance and Public Works?

AM: More often than not, what I make involves a projected, sculptural form that is modified by a temporal structure. My drawing style therefore draws on types of drawing that deal with the occupation of three-dimensional space and with things that change over time, for instance, architectural sections, storyboards, engineering wire-frame renderings, flow-charts, musical scores and so on. The exhibition selection includes some of these different approaches. We have also made use of the catalogue, creating a special section in it, of proposal drawings for public works, which in the exhibition itself are only lightly represented. 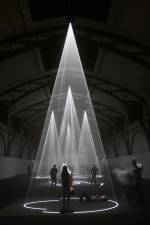