An audiovisual exhibition that joins the dots between contemporary art, electronic music and technology, with varied results 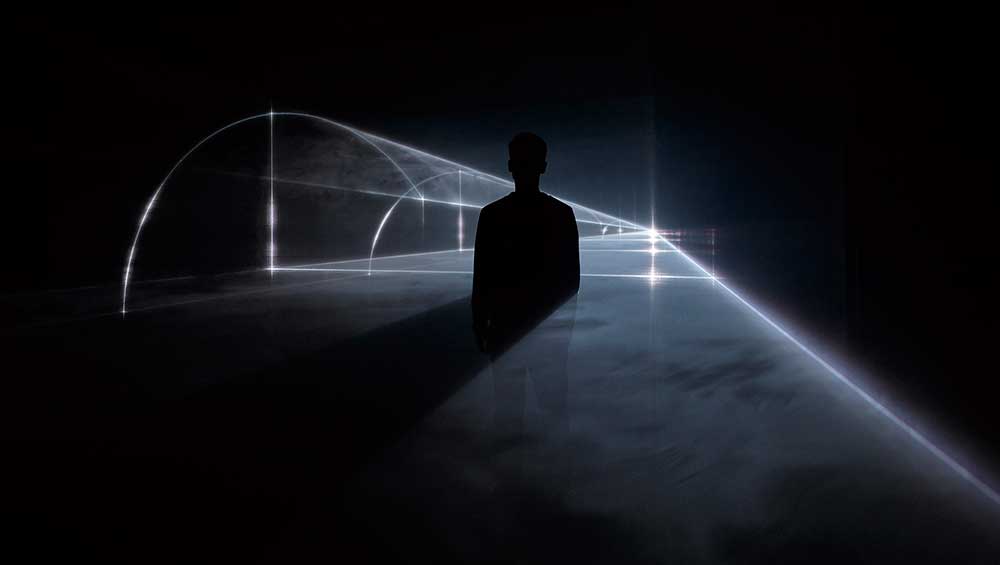 In 1970, the American journalist Alvin Toffler released a thick volume called Future Shock. Writing with his wife Heidi, Toffler argued that society was undergoing an unprecedented structural shift, from the industrial to the information-powered. This new world – where technologies are rapidly superseded by other advances, where goods become much cheaper than the labour that produced them, where sectors once taken for granted vanish and new ones arise – left people feeling disoriented and paralysed, future shocked. Toffler’s volume became an instant bestseller. Alarmingly prescient, it remains a bracing read today. 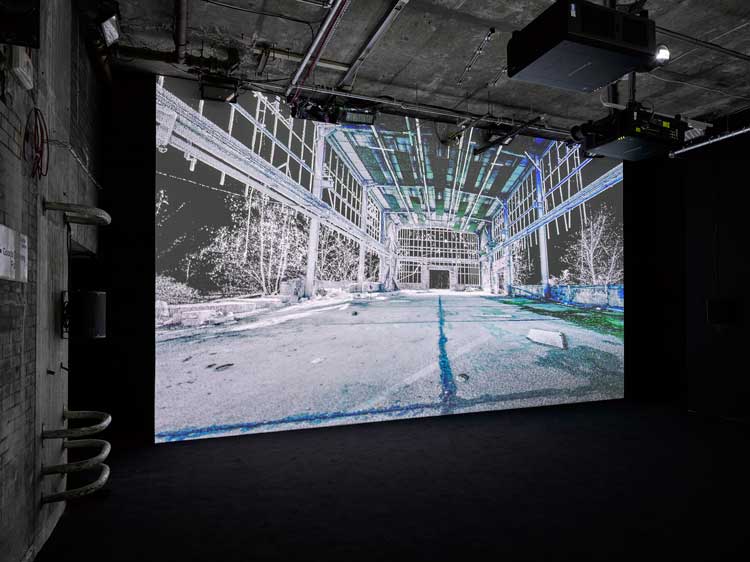 More than half a century later, Toffler’s tome has lent its name to a group exhibition at 180 The Strand, organised by the electronic music-focused magazine Fact. It opens with an installation that captures the avalanche Toffler describes. Ryoichi Kurokawa’s Subassemblies (2020) features two towering screens of digitally generated visuals placed on either side of a room. Soundtracked by pummelling beats, the visuals careen through verdant forests, abandoned buildings and subterranean dungeons, a whole world of information that we speed through at a breakneck pace. Eventually, everything dissolves. Perhaps we are melting down into primordial ooze or else joining the singularity. Either way it is terrifying, and exhilarating. At some points, the video itself vanishes and we find ourselves under a yellow light, which fades to red, as if information overload (another term of Toffler’s) has crashed the system. 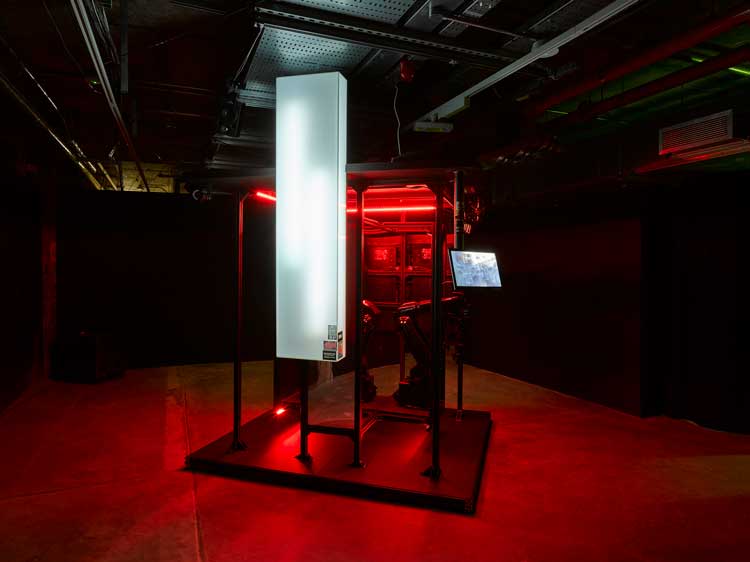 Kurokawa’s contribution sets the tone for what follows, albeit with an intensity that few of the subsequent works match. The future is often unnerving, distressing and difficult to comprehend. The London-based artist and musician Gaika presents Convo 2.2 Complex Confessional (2022), a sculpture with sinister devices and a video that plays footage of a Catholic parade of capirote-wearing penitents. I’m not sure how to connect the dots.

Lawrence Lek’s Theta (2022) stars a talking car that drives through an abandoned, post-apocalyptic Beijing, spouting video-game existentialism. And Neo Surf (2020), an extended edit of a music video by the electronic producer Surkin and the film-maker Romain Gavras (who work together as Gener8ion), shows a future inhabited by a handful of youths, who spar with katanas, inject themselves with a serum that turns their eyes blue and white, and cavort around a bonfire eating mystery meat. 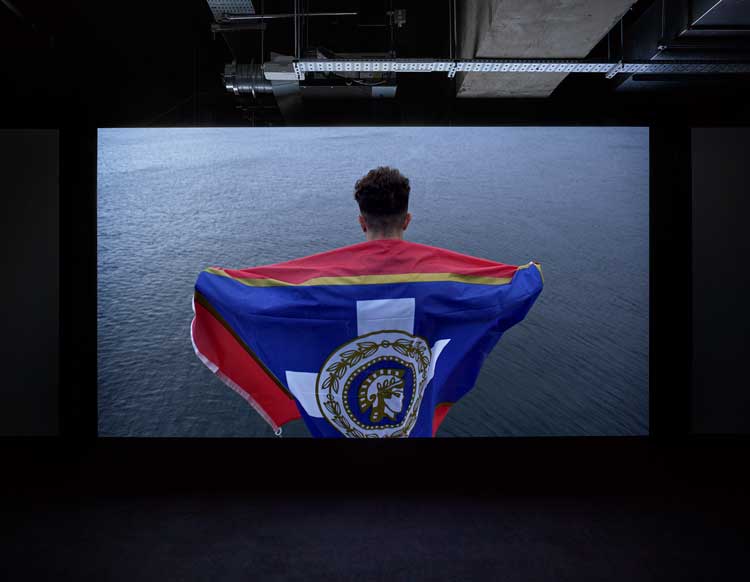 Perhaps most disorienting of all is Vicky (2020), by the Los Angeles-based Actual Objects. Commissioned for the exhibition, it features a cast of to-scale virtual humans from a data-dominated future. Each is imprisoned in a large, phone-shaped LED screen. They come from the uncanny valley school of CGI: cartoonish, yet a little too realistic at the same time. When you approach and present a virtual image to a scanner, they rant and rave. It feels like being cornered by someone you would not want to talk to under any circumstance. Along with Kurokawa’s work, it is the pick of the show. 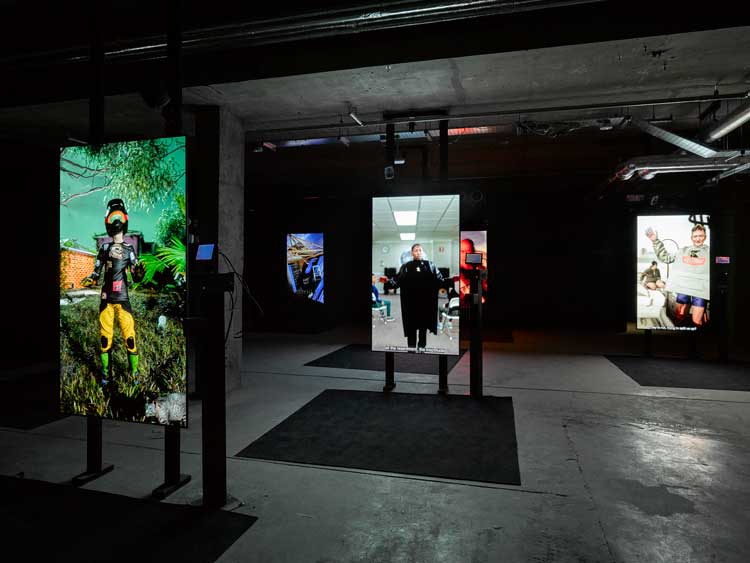 Future Shock is the latest in a series of audiovisual exhibitions at 180 The Strand that began with 2016’s The Infinite Mix. That show, a collaboration between the music company The Vinyl Factory (of which Fact is now part) and the then-shuttered Hayward Gallery, presented 10 film-based works unified by media more than anything else. While the works themselves were largely very accomplished, it was the scenography – giant screens, abandoned office corridors, dank underground storage units, a cafe with views over the Thames decked out in Memphis furniture – and staging that made the exhibition a must-see.

Infinite Mix was far from the first exhibition to reconfigure the art gallery as an experience akin to immersive theatre. But it was a particularly resonant one. It was also a hard act to follow. A succession of later group shows with slightly tighter themes but a superabundance of works somewhat diminished the overall effect and cramped the space. The Vinyl Factory and Fact then changed tack, with a programme of single-artist shows capped by last year’s thrilling, epilepsy-inducing Ryoji Ikeda retrospective.

Future Shock rows back to the series’ origins in terms of scale, with 14 works by a variety of artists. But it generically broadens out the focus. In the intervening six years, video art has become such a mainstay that Tacita Dean had an institutional retrospective across three major museums and the Turner Prize was lauded for an almost all-video shortlist. Video remains part of Future Shock’s arsenal, but it is joined by the gamut of audiovisual technology: algorithms, 3D-mapping, lasers and holograms. Many of the practitioners represented are not artists, but designers, musicians or “experimental multidisciplinary studios”. 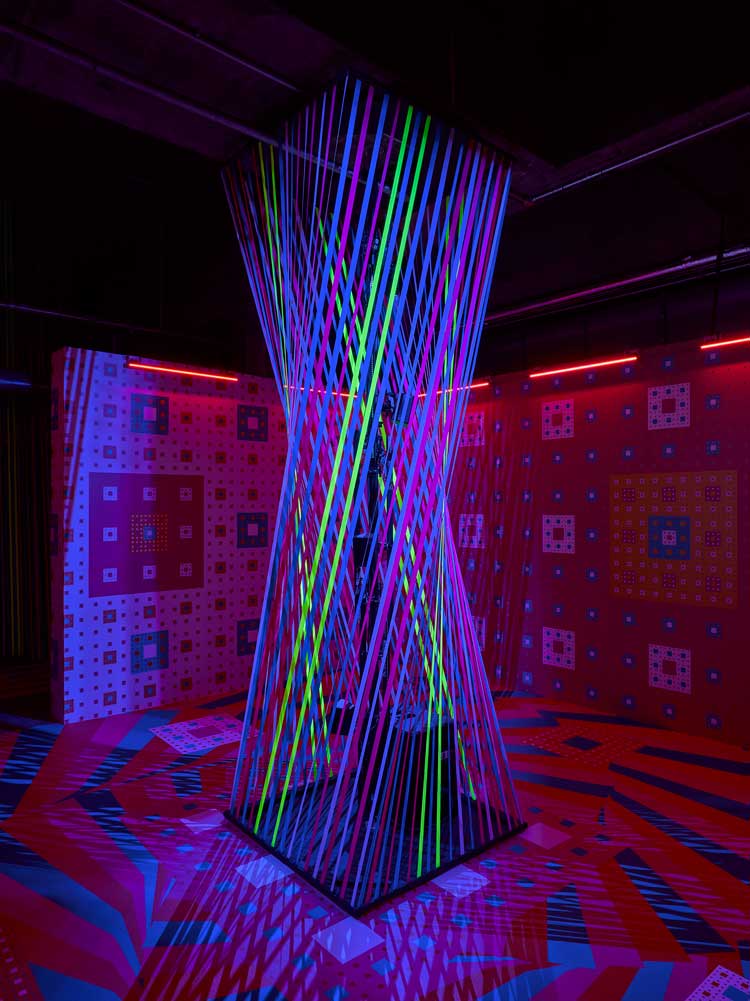 The connections to music established in Infinite Mix remain, but whereas that featured Kendrick Lamar, Kanye West, dancehall, a fictitious African jazz-funk combo and Maria Callas singing Verdi, Future Shock’s sound veers towards the club without ever quite getting there, what might be called gallery-techno. Subconscious (2022) by Weirdcore features a soundtrack by one of the progenitors of this genre, Aphex Twin. It is a twisting corridor decorated with microchip-like forms lit by strobing lights that constantly shift the colours of the wall, while Aphex Twin’s sparkly ambient techno pulsates in the background. 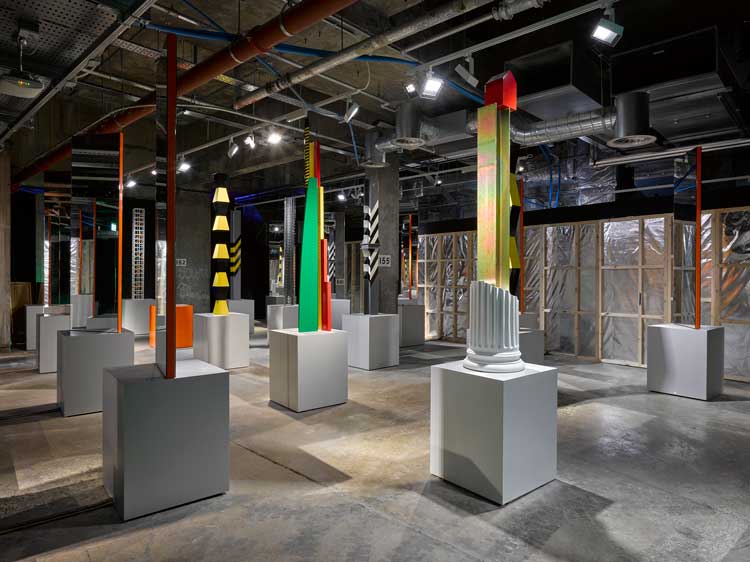 Nearby, interior designer Ben Kelly’s Columns (2022) draws on the pillars in his interiors for the Haçienda, with twirling mirrors that aim to create a hypnotic effect. Besides drifting away from the exhibition’s scene, these installations feel incomplete, as if they are waiting to be activated by dancers.

More compelling are those pieces that use technology to simulate space. United Visual Artists’ Topologies (2022) carves up a sloping room full of dry ice with beams of light. It took me some time to dare to cross them, scared of being cut in two. 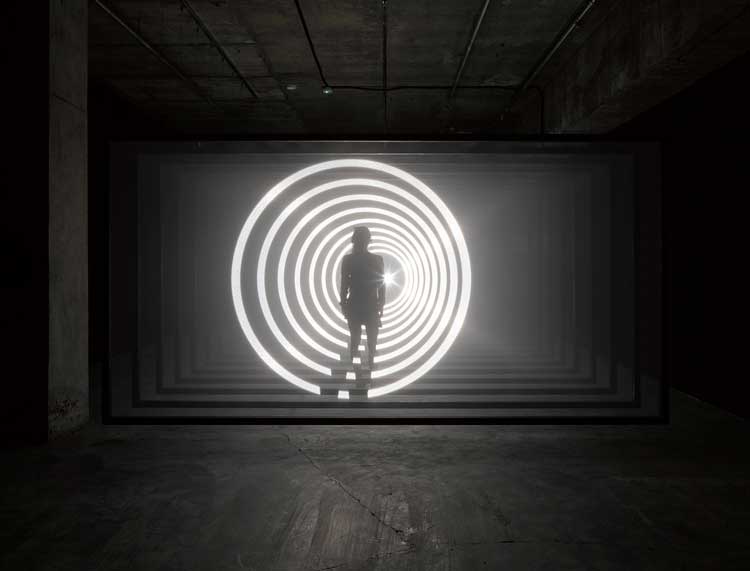 The quietly mesmerising Daydream V.6 (2021) by the collaborative project Nonotak features moving lines of light arranged in simple rows, circles and grids. And Hamill Industries’ Vortex (2016/22), sound-tracked by gallery-techno doyen Floating Points, uses light and smoke to create the illusion of smoke rings. But though these pieces are visually stunning, they provide neither futurism – Gustav Metzger and Anthony McCall achieved similar effects in the 1960s and 70s with considerably less technology – nor shock. I left with the sense that digital art has settled into a rhythm, waiting for the next disruption to come.