Yuri Pattison’s exhibition Free Traveller at Cell Project Space is an unconventional look at the state of internet technology. Pattison explores alternative platforms, contemporary power structures and the limits and bounds to the networks we rely on

For his solo exhibition at Cell Project Space, Yuri Pattison develops his long-running interests in internet-age networks that challenge and disrupt traditional notions of trade, control and identity. The visitor must push through a blue plastic curtain to enter the main room of the exhibition, which is staggered with seven black metal shelving units that stand like vertical vitrines of artefacts and data. Blue wires trail across the gallery floor towards a whirring blue Google server. The use of the colour blue is relevant because it is frequently employed by powerful high-tech companies such as Google, Facebook and IBM, yet, explains Pattison, it is also a metaphor for the sea – a sea controlled by Google, in which alternative networks float.

A small illustration of an island is the exhibition’s starting point. This particular island was the trademark for The Pirate Bay, one of the most well-known torrent search websites, which allowed users free downloads of films, games and software. In 2009, its founders were prosecuted for enabling the illegal distribution of copyrighted material. Pattison says: “I began to unpick The Pirate Bay island, which was on the front page of its website. It shows the history of The Pirate Bay, imagined as a physical space. There’s something very playful about the network and the opposition [to it]. It’s the regular internet versus the people controlling the internet and they’re sailing the high seas. I thought about this further and began to relate it to more traditional texts about islands and networks.”

Pattison references two texts in the exhibition, both of which predate the internet yet reveal the libertarian ideals of its early establishment. “The texts explore escapism, the island as a virtual space and the idea of going beyond countries and borders,” says Pattison. “The internet is not based on traditional borders. Communities are constructed by interests and sharing habits. I was researching island iconography and I came across Visit Port Watson!, which was published anonymously in the 80s. It’s a very libertarian text about an island that makes money from offshore banking. If you become a resident on the island, you get a guaranteed living wage. It was published at a time when people were doing a lot of early stuff online – it wasn’t quite the world wide web, but there were use-net groups. Someone transcribed the text into html format and it made the rounds of the web across email. People really connected to it. You didn’t have Google, so you couldn’t actually prove that it wasn’t a place. It had those early aspirations of the internet of being a free port where you could trade and deal in goods and services that were outside country and government control. The other book I referenced, The Invention of Morel by Adolfo Bioy Casares [1940], has very little to do with the internet, but there is a real sense of virtual space. It describes an eerie slippage of your online persona having a real effect on your day-to-day life.” 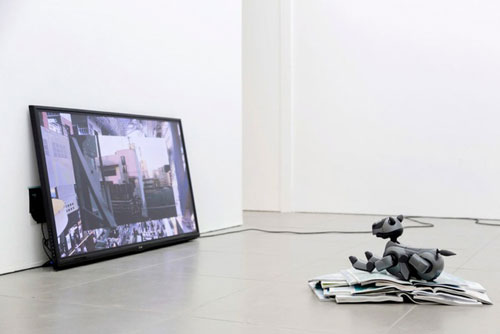 A video work, Free Traveller: “feel like you are actually there” (2014), plays from a television in the far room. The inner layer of the video shows footage from the Tropical Islands theme park near Berlin. Pattison says: “[The theme park] is open 24 hours a day and is always at 30 degrees. It’s really bizarre. There are pools, a sandy beach, tiki huts, and flamingos that look really miserable. It’s a space outside time, because it’s always daylight. It’s outside money because you have a wristwatch that you tap to pay for things. It’s a strange virtual experience, which I really related to the idea of the internet. Technology is so seductive that it masks its constructed reality. I don’t think people think about it on a daily basis. It’s only when you run up against walls and there’s a Truman Show moment – you swim up to the edge of the dome, but it’s a painted sky and you hit the edge.”

We travel with Pattison through the constructed empty paradise, where paths and sun-loungers are vacant. “I wanted to keep that layer of a space devoid of people, which was an aesthetic decision. I wanted to emphasise the technological element of the virtual space, and moving the people helps with that.” In contrast, the outer layer of the video work shows a busy urban street shot by [Japanese film-maker/director] Yuki Eikawa as part of a series called World-Cruise (2010). Pattison says of Eikawa: “He makes his money by shooting very seductive Steadicam shots of the world, which he sells. His YouTube channel gets millions of hits so he makes money from advertising revenue. He embodies the digital nomadic existence referenced by the inflight magazines.” 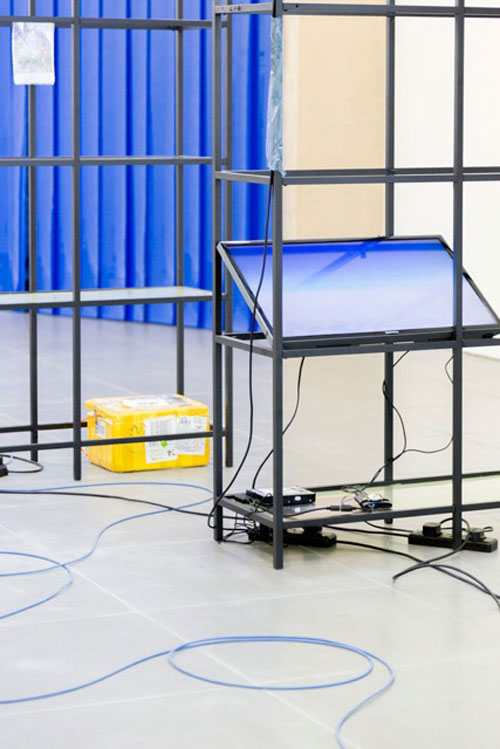 In the sculptural work Aibo Overcoming Modernity (2014), a robotic dog – made by Sony and programmed by Pattison – perches on top of a stack of inflight magazines, wagging his tail while watching the Free Traveller video work. The magazines are open to show maps of various trade routes. “Technology and globalisation are linked through constant travel,” says Pattison. “Someone making their money online is often hopping from city to city, living a very temporary existence and always connected to the network. You might also have that same existence further down the scale, in China for example, where people who make technologies spend six months working in a factory and then go back to the countryside. There is a huge displacement due to network technology.”

Pattison moves on to discuss the dog. “The Sony AIBO dog is a seductive piece of technology. Its creator, Toshitada Doi, is a very important figure culturally in Japan. He wanted to create a really open platform, but Sony made people fall in love with it, then charged them to buy software, monetising their emotional engagement. Doi eventually held a funeral for the AIBO dog, changed his name and became a motivational speaker. He now does TED talks about the importance of reconnecting with tradition and freeing yourself from modernity. What I’m interested in is the spiritual aspect of it, which he spoke about. How can technology be rewarding and beneficial? How can you learn and develop from it?”

As we talk, the blue Google server whirrs away in the background, a constant reminder of the network that exists beyond the gallery, and the website Pattison has developed to run in parallel with the exhibition, titled Familiarity breeds contentment / 81.130.128.225 (2014 – ongoing). Pattison explains its origins: “I bought the Google server on eBay. They’re not supposed to sell them on, but I hacked and deleted their search algorithms and repurposed it as a web server. So, the online component of the show is hosted within the show itself and when you visit the website, you’re visiting the data that’s saved here. The website acts like a scraper site, actively collecting information based on the keywords of the show. It mines away, travelling the internet, gathering and amalgamating information, re-contextualising it and posting it. It’s about piracy of information, but also the wider network implications, like how you’re influenced by your consumption of data without knowing it. For example, it started gathering information on plane crashes, which is not something I asked it to do, but plane crashes probably has a high frequency rating in relation to travelling. It has already found the modern anxiety of globalisation where news becomes an online phenomenon because it’s unexplained and problematic for people’s comfort zone.” 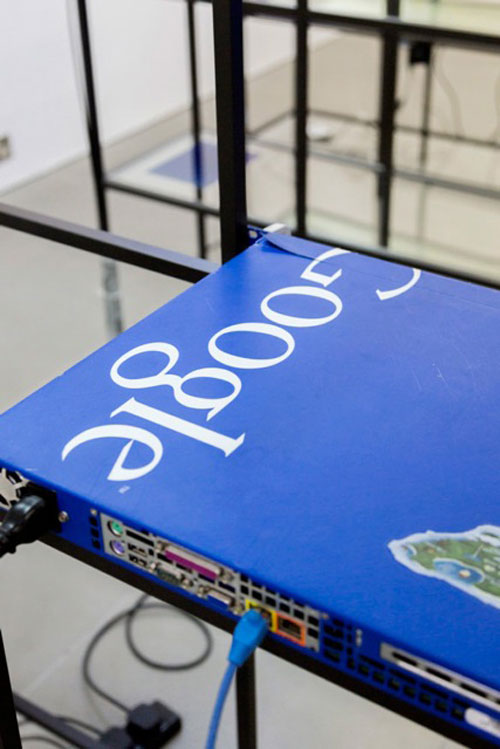 As well as hosting the website, the server is a physical presence in the gallery, producing sound and heat. It stands on the middle shelf of a black metal unit. Pattison described the units, which are replicated diagonally across the room: “I was definitely influenced by the architecture of the internet. I visited a data centre in Stockholm, which is built in a nuclear bunker. If you can imagine a thousand of these servers, which all modulate and vibrate, and intense heat and cool from the fans – you feel like you’re surrounded by a network. Each of the units in the exhibition is an island, and references how you would usually host server banks. You can order these Ikea shelves from any part of the world – they are a framework I’ve been using for other works too. It’s like a printed readymade, which again ties into this global economy.”

Pattison summarises: “Network technology has accelerated so much. It’s a new industrial revolution and it’s gone far past standard globalisation. In tech, they would call it disruption because it disrupts everything we understand in terms of the traditional world; money, government. It’s a really aspirational disruption because you already begin to see its impacts in how businesses manage their social media to sway political opinion, for example – it’s all orientated through network technology. Network technology is incredible, but the internet isn’t this free space, there are many walls and filters that are problematic because they’re invisible. My concern is the filter between the controls and the technology.”

The neatly aligned black units give this exhibition a sense of order, and the physical presence of the server contributes a comforting sense of locality. Pattison proves, however, that network technology is global and deceptive, and the rules are being rewritten for these new structures of power within society. FreeTraveller is not a disclaimer or a warning, but an invitation to sail into the bay, cast down an anchor and become a free agent in the sea of Google.